Well, after the dreadful disappointment of the Beagle 2 (guess my words on it in my review of the Backroom Boys on the Alien were overly-optimistic when writtenbefore Xmas) the NASA Odyssey probe has returned some amazing pictures, available here. NASA are normally very good at sharing their incoming data with the public (but then they probably know millions of geeks round the world are all online and also the sorts of peope who support them). The Mars Surveyor a few years back mapped Mars to the same sort of detail of an Earth atlas. A mere century between Lowell looking through his telescope and imaging a dying civilization carving canals to save their arid world a we have a satellite atlas of Mars which goes right down to the scale of some of the boulders. I used to check it out during the mission as new images were posted only a few hours after being beamed across several light minutes from our neighbour. Yes, I know, pretty geekoid behaviour perhaps, but I thought it was amazing; I was watching pictures from the surface of another world. How much fun would it be to actually go there for real? Bet my chum Kate could have fun off-roading in her Land Rover on that surface! Or maybe we’d need a tripod? Uuuullllaaaaahhhh, as those pesky Martians say, unless you’re a Tim Burton man instead of an HG guy, in which case it’s “ack, ack, ackacackack”.

Apparently NASA were swamped with people trying to access the images, so much so they had this statement on the page: Wondering why you can’t always get the highest resolution images and video? By early Tuesday, visitors downloaded nearly 15 terabytes of information from NASA/Mars Websites. To hold 15 terabytes, it would take a stack of more than 20,000 CDs – without cases – reaching more than 100 feet high! Keep checking back as traffic gets lighter. Guess I’m not the only person still interested in exploring the Final Frontier then. 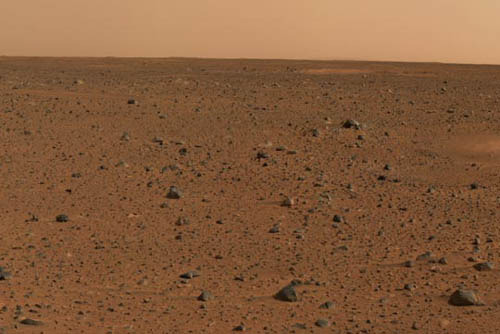