A good article on the BBC-I science pages on a new exhibition on virtual women. No, not cross-dressing men, you silly, twisted little boy – virtual women; digital babes. Lara, Annanova etc. Intersting how many virtual models have the same unreal body shape and proportions of comic book heroines such as Wonder Woman. Gee, you’d never guess a lot of these were designed by lonely guys, would you? But then, anyone who has looked at the tautly muscled, bare-chested, square-jawed hero holding the swooning lady on the cover of women’s romance novels knows that women are just as guilty of this virtual idealising of a gedner’s body shape as men. We’re probably just more up-front about it.

So when will the android wives be reliable and affordable? And doesn’t this example look a lot like Angelina Jolie? A woman famous for playing the flesh and blood version (albeit in almost comic form) of a woman who was a digital babe originally, now modelled for digital beauty. How post-modern. 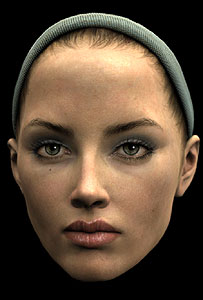