King of the beasts

A disturbing article in New Scientist suggests that the population of lions in the wild has now dropped to around 23, 000 animals – a drop of around 40% over the last dozen years. If correct this moves the greatest of the big cats from what was already a threatened species into one perilously close to the edge of extinction. Human activity, from direct action such as poaching to indirect, such as taking land for farming, building and other encroachments into their territory by humans are driving this magnificent species – along with so many others – to the brink of destruction.

Imagine an Africa without lions. No roars in the dark Serengeti night, no glowing eyes evolved superbly over hundreds of thousands of years to see perfectly in the dark. Quietly stalking their land as they have for millennia, fast, ferocious, beautiful. Imagine no more lions except those poor creatures who live in zoos, gazing sadly from their captive state. When we devalue any species we ultimately devalue all life, including our own species. 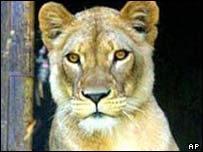