The National Museum of Scotland on Chambers Street, Edinburgh is currently hosting Pixar: 20 Years of Animation. Celebrating the most famous exponents of big-screen computer animation the exhibition, as the name suggests, has material from just over two decades of Pixar studios work, from the very early shorts such as the animated desk lamp (still seen on the studio’s logo at the start of each movie) through Toy Story, Finding Nemo, the Incredibles and Cars right up to concept art for the forthcoming Ratatouille.

As you would expect for this sort of exhibition there is a lot of art on display, from preliminary sketches and storyboards (looking at the storyboards makes it clear these animators were all big comics fans as kids and never grew out of it – good on them!) through to finished works, models and maquettes (there is a cracking series of head models from the Incredibles, each showing a different expression on Bob’s face, like exhibits from the world championship of gurning) and short videos showing of different aspects of Pixar’s work. There’s a chance to get interactive with touch-screen presentations allowing more access to behind-the-scenes looks and information while the museum is running a whole series of related events, from lectures on animation, showing Pixar movies every Sunday in the lecture hall, storytelling events inspired by Pixar movies, showcases on Scottish animation and more (the NMS site has the full details). 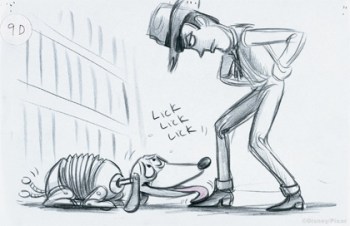 While all of this was highly enjoyable the standouts of this exhibition are two mini-shows. The first is shown on a wide screen. Actually, a very, very wide screen. A wiiiiiiiiiiiiiddddddddeeee screen. The sort you have to swivel your head from left to right to follow movement. It takes the form of a wall of art from the Pixar crew; as the camera pans across the gallery wall (some of the pictures static, others animated) it periodically moves into a particular picture and the viewers are treated to a new animation playing on themes from previous Pixar movies, all on this enormously long screen; it is big and it is clever.

Oh but there is even better than this. There is the Pixar Zoetrope. You remember those wonderful Victorian toys for children, where a form of lampshade has a series of slightly different characters printed on it, with slots cut – spin the shade around a lamp and the figure ‘moves’. We’re all familiar with it – it is after all the basic principle all animation, from the most basic outline drawings through Ray Harryhausen stop-motion creatures right up to the most cutting edge CGI cartoons work, a sequence of still images flickering before our eyes at 24 frames per second until our eyes and our brains interpret them as movement and static cartoons come to life. Pixar’s Zoetrope is designed to explain this basic concept in the most incredibly fun way – it makes a cartoon come to life in 3-D. Victor Navone, an animator for Pixar, has a short looped video of the Zoetrope taken from the earlier show at MoMA in NYC, although, as he says himself, it simply doesn’t do justice to how it actually looks when seen with your own eyes, nose pressed up against the glass. 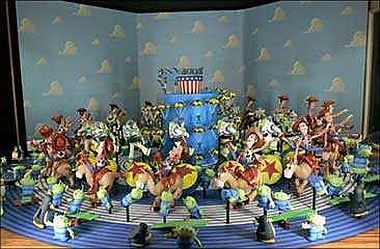 In a darkened room there is a large, glass case. Inside the case is a very large disc, with several rings of models of different Toy Story characters, all in slightly different poses. The disc begins to rotate slowly, speeding up; as the characters being to blur before your eyes as the frequency increases a strobe light comes on and suddenly something magical happens – the models come to life. Seriously, the illusions is utterly magical; Woody rides his horse, Buzz Lightyear balances on a ball while endless toy soldiers leap from the top of the bucket o’ soldiers, parachutes blossoming into life as they leap down. It is for all the world like having a real, solid, 3-D cartoon right there in front of you. The fact the exhibition shows you exactly how it works doesn’t detract from the magic in any way whatsoever; frankly it was worth the price of the exhibition for the Zoetrope alone. It did what a lot of the finest animation does – it makes you feel as if you are five years old again, standing with big wide eyes open in wonder. I’m still buzzing from watching it (actually watching it several times, it kept drawing me back); I saw this with my dad, the man who ensured I was raised as a Seventh Day Cartoonist, and we both emerged with smiles like Cheshire Cats to my patiently waiting mum (with them both retired now and me off this week we were having a very nice day together, food, drink and sightseeing).

The Edinburgh exhibition runs through until May 28th at the National Museum of Scotland, along with a raft of supporting events, with full details to be found on the NMS site. And when you come out one of the other exhibitions on at the National Museum currently boasts a huge, shiny rocket straight out of a Dan Dare comic (a Black Knight rocket from the aborted 50s British space programme, which is pretty much the same as Dan Dare in so many ways) and an actual NASA Gemini space capsule on loan from the Smithsonian.