I was approached by some of the folks who were organising previews of the upcoming film adaptation of Frank Miller’s graphic novel 300, which tells as historically rather loose but nonetheless brilliant tale of the 300 Spartan warriors who held off the entire army of the Persian Empire for several days while the other Greek city states rallied their forces (Athens would later repeat this victory at sea, crushing a huge Persian fleet). It is one of history’s great turning points; had the Greeks been ground under the Persian heel our modern world would be very different, without that Classical flowering of philosophy, scientific enquiry, writing and democracy (how ironic a bunch of military zealots who ran their brutal society by enslaving an entire people to do their work while they trained would be so instrumental in this). 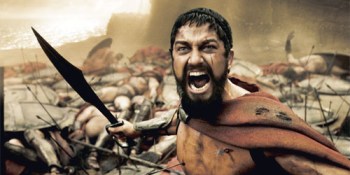 Unfortunately for me the preview was at the BFI’s Imax screen in London, so I couldn’t really make it, but a couple of my colleagues at FPI based in London were only too happy to go along and have now posted a preview up on the FPI blog. I can’t wait to see it myself – historical inaccuracies aside it looks quite amazing, being shot in a manner very similar to Sin City (another Frank Miller comics adaptation), matching the comics original almost panel for panel, shot against green screens with very few actual sets to give it an incredibly stylised look. And I’m sure the girls (and some of the boys) are going to enjoy 300 incredibly fit men who spend a lot of screen time almost naked and oiled 🙂