Who’s in the Beano?

The first edition of the new BeanoMax comic goes on sale on the 15th and will also be a special edition to raise money for this year’s Comic Relief (for non UK readers that’s a bi-annual charity event where money for good works is raised by comedians and thousands of ordinary people doing very silly thing and wearing comedy red noses all day, in finest traditions of British eccentricity). And along with some other celebs the comic will also have the Daleks forcing the Bash Street Kids to study, but luckily the Doctor will be on hand to help. Jamie Oliver will apparently be in the school dining hall; many a school child will cheer should he be exterminated. 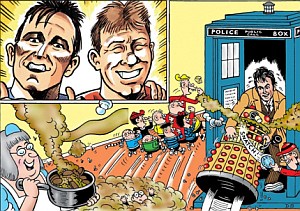