I used my book wheedling and scrounging skills (if I were in the Great Escape I’d be James Garner’s character) to procure a couple of the latest graphic novels from Rebellion, home of 2000AD for prizes for a competition at work. Rebellion started a new series last year collecting classic material with the Complete Judge Dredd Case Files, which collect all of Dredd’s adventures into chronological order, volume by volume, starting right back in 1977 (yes, I do have every volume so far – can’t help it, I grew up with 2000AD from the first issue – or ‘prog’ as they call them – and am a total fanboy still). They’ve been hugely successful, I’m glad to say and on the back of this they have launched new series doing the same for other classic 2000AD characters, in the same format so they will all build into a classic library of Brit comics on your shelves. Jon at Rebellion not only obtained the Judge Dredd Complete Case Files Volume 5 for us, he got it signed by John Wagner and Alan Grant, two of the biggest names in British comics and the Complete Nemesis the Warlock Volume 1 signed by the equally legendary Pat Mills. 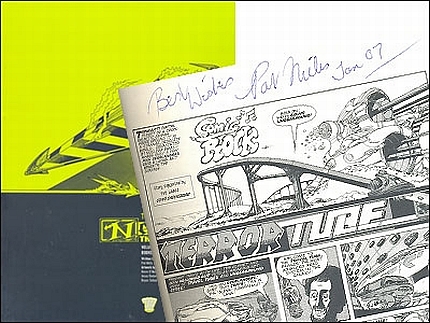 Incredibly collectible volumes for any fan to have on their shelves – I’m a bit jealous as I have these books myself but not signed! Anyway, with the 30th anniversary of 2000AD coming up in a couple of weeks (yes, it really is 30 years old) we have the competition to win these signed graphic novels running – details can be found on the (freshly made-over) FPI blog and the entry form (with oh-so-easy question to answer) is on the main FPI webstore; get those entries in by Wednesday 21st to be in with a chance of winning!