I’ve seen strange things over the years, but I never thought I’d see Sky actually making a decent programme (actually Sky just making any original programming instead of buying in all the time is pretty rare) but I have to hand it to them, they did a great job with a two-part adaptation of Terry Pratchett’s Hogfather. I thought Death and his grandaughter Susan looked very much as they do in the Paul Kidby’s Art of Discworld while one certain buck-toothed City Watch man was so obviously Nobby. The odd bit wasn’t quite right and the occasional special effect looked dodgy (mostly when you saw mini-people like the Verrucca Gnome), but overall it was pretty good, with Terry’s mix of a good tale, knowing humour and fun too. And Death is always a good laugh; I wonder how he’d get on with Neil Gaiman’s Death? That was good fun (and a nice little cameo from Terry himself); Happy Hogswatch, folks! 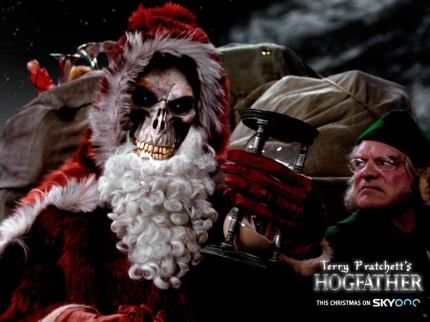