The Edinburgh Filmhouse is screening a restored version of Woody Allen’s Manhattan, a movie Mel and I have watched many times, but a chance to see it again on the big screen is too good to pass up, so off we went, taking our Norwegian friend Vidar along (he had never actually seen the film before). There is something so different about watching a film in a cinema rather than on DVD; in the case of Manhattan it is most noticeable in some of the loving scenes of New York itself. Shot in black and white the cityscape has the crisp visual allure of a good photograph while the monochrome also imparts a timeless feel to the movie so it feels like a film for any period, not a 70s movie.

And there’s something else different about watching it in the cinema, the simple alchemical magic of projected light; the fact that the image is projected rather than interpreted from data on a DVD disc imparts a silver sheen to some of the black and white scenes – that famous opening sequence of New York set to the music of Gershwin becomes luminous while the scene with Diane Keaton and Allen on a bench by the bridge as dawn breaks softly across the river has become an iconic movie image. Mind you, the “she’s just a kid, too young for me” dilemma Woody finds himself in over his romance with Mariel Hemmingway takes on other meanings for contemporary audiences familiar with Woody’s current spouse; there goes that old life and art doing impressions of one another again… 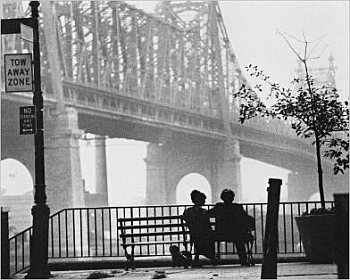 Also on at the Filmhouse throughout December is a freshly restored print of The Wizard of Oz. Sure, I’ve seen it a hundred times; it is, (in)famously shown so often at holiday periods on TV, but I’ve never seen it on the big screen. It’s not my favourite movie, but it does have some scenes in it which are pure cinematic gold and some of the most stunning visuals (how much more powerful must they have been when it was first seen decades ago?) and again the chance to see it, cleaned up and restored, on the big screen is too good to pass up – I think I’ll go and see it after I finish up at work, be a little holiday treat for me. I will try to restrain my urge to join in the songs. Oh and there are flying monkeys too! Brilliant.