I seem to be on a hat trick of good movies recently; the last three I caught have all been excellent, as well as quite different from each other. The new Bond movie was a nice, taut thriller-actioner, the Prestige was a serious mind-trip, like Chris Nolan’s earlier (superb) picture Memento it is a movie that engages the viewer and forces them to think about what’s going on, sorting through the broken chronology, the misdirection, smoke and mirrors which is as much a part of the film’s structure as it is a stock-in-trade of the duelling magicians it centres around (and how brilliant a setting is the world of Victorian stage magicians for a tale? By coincidence I am reading a book due next year also in a similar setting, featuring a stage magician, the Sonambulist).

Then came Pan’s Labyrinth, the latest film from Guillermo Del Toro who adapted one of my favourite comics characters, Hellboy, as well as his earlier, intriguing works like Cronos and Devil’s Backbone. As with those latter two films Pan’s Labyrinth is a Spanish-language film and like Devil’s Backbone it juxtaposes children adrift in the violence of Spain’s Civil War against the supernatural, in this case a young girl normally lost in her books of fairy tales. Taken by her heavily pregnant mother to a remote forest home where her stepfather, a brutal officer in Franco’s army, is hunting the last of the Republic’s partisans she discovers an ancient labyrinth near the house (labyrinths and spirals being a very ancient device in the human psyche, predating even the earliest Celtic cultures who we often associate with them). 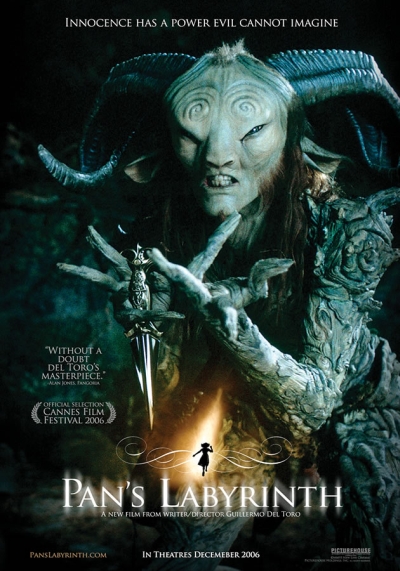 Del Toro never makes it clear if the magical labyrinth within the moss-covered ruin, or the Faun, faeries and other folkloric creations are real or the imagination of a young girl trying to escape a brutal present, or indeed to understand the fact that the world can be cruel, as this is a ‘proper’ fairy tale, magical but also dark, dangerous and often disturbing, as a true fairy tale should be. This is no sugary Hollywood creation and reminds me of the older, more original versions of our fairy tales, before they were cleaned up for children’s picture books. The true fairy tale, like any piece of folklore which last the test of centuries of retelling, does so because it tells us something, even as children – perhaps particularly when we are children – about the world and life.

I love that Del Toro doesn’t tell us what is real and what is not; some directors, especially in Hollywood, would have set the film up so we find out it is all in her mind or that she really does see something with her childish innocence that the adults do not (until the end of course). No, he doesn’t do that – engage your imagination, use the palette I am giving you he says, then add the final brushstrokes yourself. He mixes Freudian and Jungian dream imagery with ancient folklore and more modern tales; in one scene our girl is dressed like a Gothic version of Alice and she too enters a different realm but instead of falling down a rabbit hole she enters a dark hole (shaped rather like a vagina) in a dying tree, entering into the womb of the earth, but instead of a cave it is damp, muck-filled and inhabited by a vile giant toad she must trick (even more interesting given the young girl is terrified of ever having a child herself because she sees her mother struggling with a bad pregnancy). 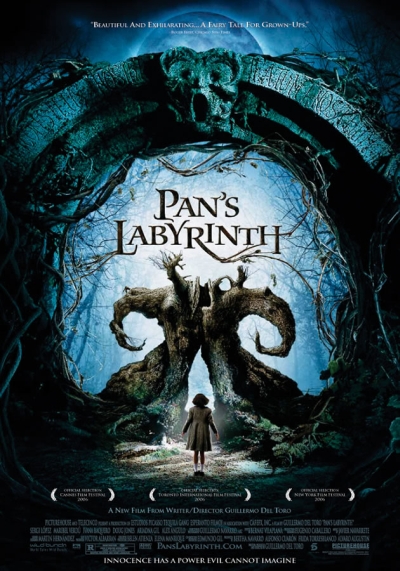 I’m not going to say too much more here lest I spoil it (except to say the scene with the mandrake root “the plant which dreamed it was a person” as the Faun tells our heroine, is incredibly creepy and disturbing but also fascinating and magical at the same time). If you are a person who normally doesn’t watch subtitled foreign movies make an exception; this is a dark, deep, intoxicating work of mature fantasy, drawing on sources ancient and more modern, visually rich and Gothic (I mean proper Gothic, not skinny girl in black eyeliner Gothic), sometimes like a Goya painting coming to life. And if you have an interest in folklore, world literature and myth you will especially adore it (Yvonne, I’m looking in your direction here). And don’t just take my word for it – Guillermo invited Neil Gaiman and his family to a sneak preview a few weeks back and he thought it was excellent too (and apparently Guillermo, unsatisfied with previous translations of his Spanish language work, did the English subtitles himself).