I came across an excellent webcomic last week after hearing about it on Boing Boing: Shooting War. Created by Anthony Lappé and Dan Goldman it begins with Jimmy Burns, a video blogger in 2011, who is testing out his new portable system by having a live anti-corporate rant on camera while uploading to his blog. Panning the camera to what had been a family business and is now a Starbucks (just beneath his apartment) he is somewhat taken aback when it explodes in his face in a terrorist attack; welcome to 2011 – it looks a bit like today but worse. 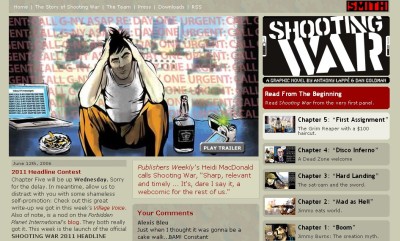 An unscrupulous new media company (which for some reason reminds me of a certain American broadcaster who practises being ‘fair and balanced’ exaggerated – although perhaps not exaggerated that much given how many times they have been rapped by the broadcasting standards people here since they began re-broadcasting their ‘news’ programme in the UK, but I digress) spots this live feed, grabs it and puts it on the air – suddenly Jimmy is a star. He finds himself offered a chance to be a paid war journalist in a civil-war torn Iraq; his big break does not go exactly as he hopes.

It is a bloody gripping series – now up to the fifth part – and the good thing is it makes points but doesn’t lecture or preach to do so. The use of a blogger as a central character is both a nice touch and also a respectful nod to real bloggers who report on Iraq (and other places). Dan’s artwork is excellent while Anthony’s script carries a good weight of authenticity as he has actually reported from Iraq himself. The guys are running it on Smithmag.net and hoping to see about a physical print version in the future – any publisher reading this, please take note, because I’d stock this with my graphic novels section at FPI right away if it was printed. This week Anthony kindly wrote a fascinating piece for the FPI blog about Shooting War and today he let me know that they are now getting coverage in the Village Voice and Rolling Stone – result. I highly recommend checking out Anthony’s post then having a look at Shooting War itself.