A couple of weeks ago writer, Boing Boing favourite and media commentator Douglas Rushkoff kindly wrote a few lines about his current comic series (due to be collected as a graphic novel this June from DC) Testament: Adekah for the FPI blog in which he said he was treating the Bible as “open source code”. Well, Doug has just posted a much longer piece on his own site about the comic and also his views on religion in general – it is very interesting stuff and bound to annoy some people, especially in the US where he no doubt has people already annoyed at the comic to begin with. But then most of them probably won’t do anything as radical as reading it before condeming it, so who cares what they say. This may damn your immortal soul but it may also lead you to a damned cool graphic novel.

Actually this summer looks like being a good month for mature graphic novels titles. Along with Testament another DC title I am eager to read – especially after reading what Neil Gaiman had to say about it on his blog recently – is Can’t Get None, a very unusual angle on 9-11 following a man whose business goes belly-up right before the twin towers are hit, his shattered view of life echoing that of the nation and world. It is a very unusual style as well, mostly captions and pictures rather than dialogue bubbles. According to Neil:

“The combination of image and text has a weird, cumulative effect, a sort of literary synesthesia that gave me the same kind of oneiric reading sensation I normally only associate with novels by, say, Thomas Pynchon or Steve Erickson. I don’t think that CAN’T GET NO reinvents the graphic novel – it feels more like Rick is rediscovering the power of the “story in pictures” as he goes, taking everything he knows about comics, everything he learned about dreams doing the Rarebit Fiend comics, and making something new and moving and, as I said, utterly strange.”

Along with the last of the post-Palomar Luba books coming from the great Gilbert Hernandez (of Love & Rockets fame) this summer is looking good. If you are someone who normally doesn’t read comics because you assume they are all only about superheroes then try checking these out. Or if you are a girl and assume all comics are for boys check out Hernandez, or check out In the Hands of Boys from Melody Nadia Shickley, a Xeric award winner which is picking up some good word-of-mouth. Melody also wrote a short piece about her work for the FPI site here so you can see what she has to say about it in her own words. 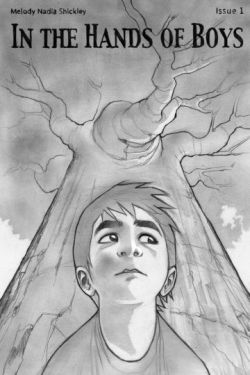