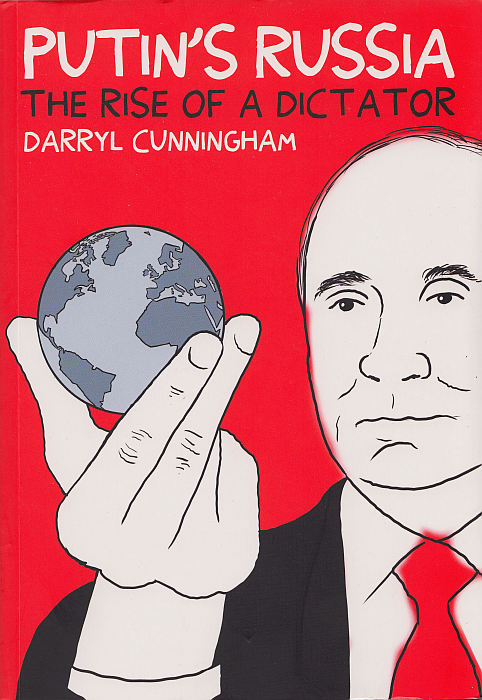 Darryl Cunningham, for my money Britain’s finest non-fiction comics creator, returns, following up his previous, fascinating and insightful books such as Graphic Science and Billionaires, here turning his studied gaze upon the vile, despotic Vladimir Putin. Putin’s Russia: the Rise of a Dictator takes us from his birth in Leningrad (now back to its pre-Soviet name of Saint Petersburg) in 1952.

As with many from that generation, his parents were veterans of the Second World War (or Great Patriotic War as Russians often refer to it), and he would, like many across Russia and Europe, grow up in a city still bearing the very visible scars of that grinding, global conflict. A relatively small child, he was picked on, and learned not just to fight back, but to fight dirty, something he has clearly carried with him throughout his adult life; one is moved to wonder how very different the world may have been if his childhood had been filled with happier moments with better friends. 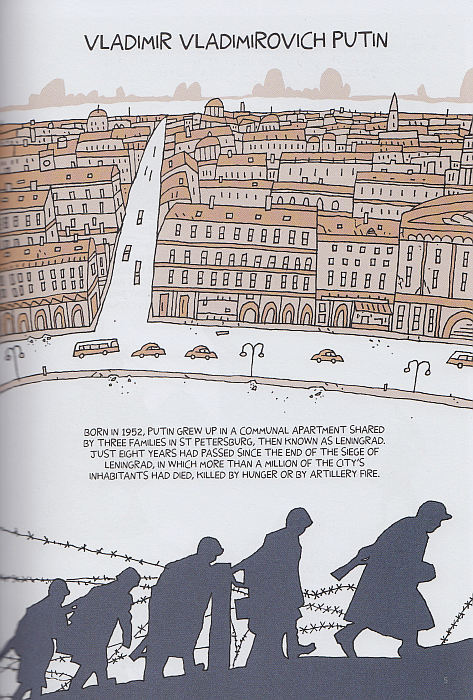 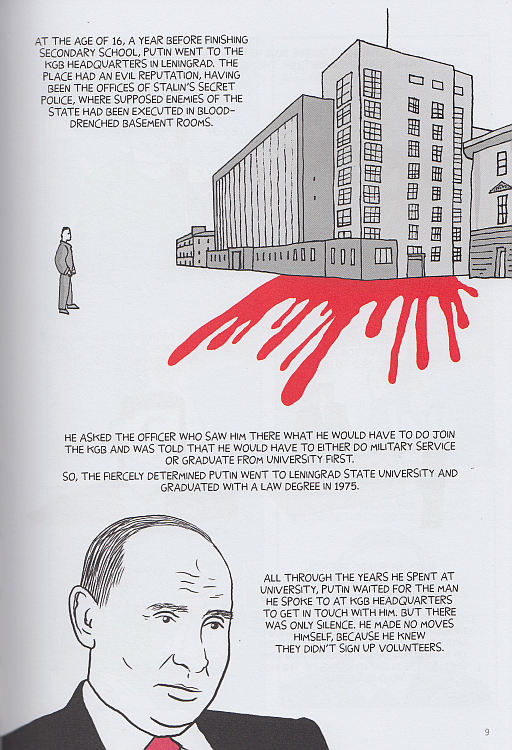 By his mid-teens, young Putin had already decided he wanted to be a part of the dreaded KGB, at the height of the Cold War. This is an era where the KGB spent at least as much time spying on and dealing with their own citizens as it did in spying on and taking covert actions against Western powers, with a vastly inflated number of informers prepared to rat out their own neighbours and colleagues; the fact a young lad was so keen to join such an agency at that time doesn’t speak very well of his intentions or characters.

Cunningham takes us through Putin’s early KGB career, much of which is still murky and hidden, and his supposedly post-KGB life (I say supposedly because there’s a strong likelihood he was still secretly on the active reserve list), and his early brushes with political power, as an advisor to the Leningrad city council, and even at this very early stage there is both indicators that the intelligence services may have been involved in influencing his appointment, and also of massive corruption (and subsequent cover-ups by any means).

While I was aware of his KGB past, I had no idea of these early political appointments for Putin, or the way he and his cronies misused their growing powers even back then – this was still in the era of Glasnost and Gorbachev, then the attempted coup in Russia,by die-hard Communists, the rise of Yeltsin, the fall of the Berlin Wall, the disintegration of the once formidable Soviet Union, all the related changes in what had been the effectively occupied Eastern Bloc.

Many of us of a certain age will remember these tumultuous, world-changing events, and reading here brought much of it rushing back to me, not least that fragile then slowly blooming hope so many of us had, that this was it, the Cold War was over, Russia was becoming a democracy, we were all going to be friends, the terrifying spectre of Mutually Assured Destruction by nuclear war was fading. You have to remember that back then we had lived for years with the monstrous thought that our entire shared civilisation could be annihilated with only the notice of the five minute warning, before the nukes started dropping. It was one of the most insane periods in human history, and here we were, thinking my gods, we’ve made it through and it’s going to get better. 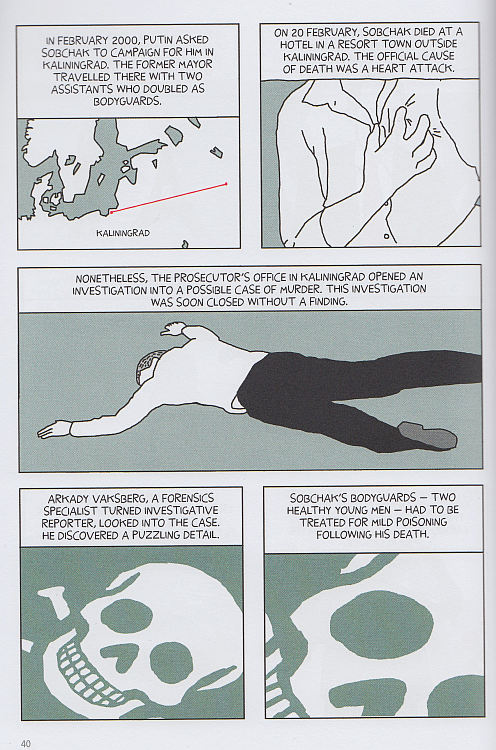 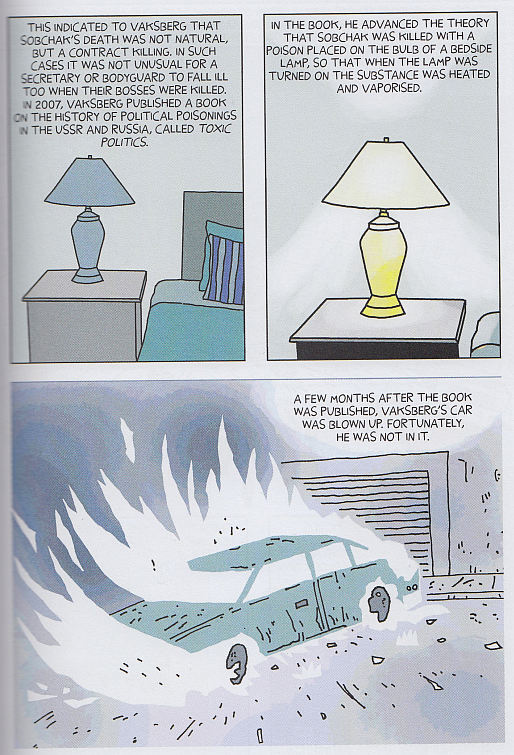 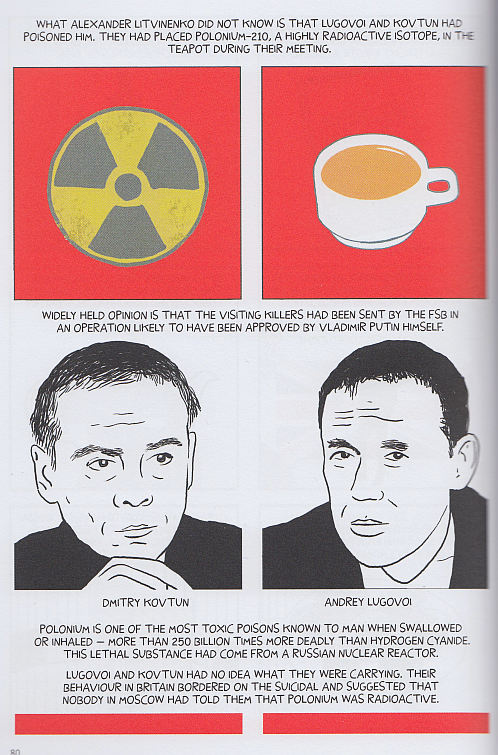 Of course it didn’t work out that way, and that optimism was so sadly misfounded. And while we may not have quite returned to the hair-trigger, stand-off days of MAD, the world’s great powers have again been badly divided, and with quite clear intent of aggression and harm being directed against us. And the rise of Putin is a part and parcel of this. Cunningham explores this rise, the new Russia where a few become obscenely rich through massive corruption, dining out on the nation’s resources, all with Putin’s connections. The way this spreads across the globe as this dirty money enters the global financial system, not least the greedy financial centres of London and New York which were happy to take oligarch’s money, letting them buy property, connections, influence in Western countries, with Putin always behind this growing, sinister network.

That baleful influence has spread throughout the world, not just in terms of dodgy finance and dealings (no surprise to those of us who read Cunningham’s excellent and informative Supercrash book), but in openly hostile, physical acts beyond Russia’s borders. Not content with “accidents” befalling critics at home, Putin has overseen both large-scale military interventions, such as in the continuing horror of the civil war in Syria, with its massive butcher’s bill of civilian casualties, or the illegal annexing of the Crimea, to the intimate but just as nakedly aggressive assaults, such as the poisoning of Alexander Litvinenko, the poisonings in Salisbury, or the despicable shooting down of the civilian airliner MH17, or attempts to influence the US presidential elections. 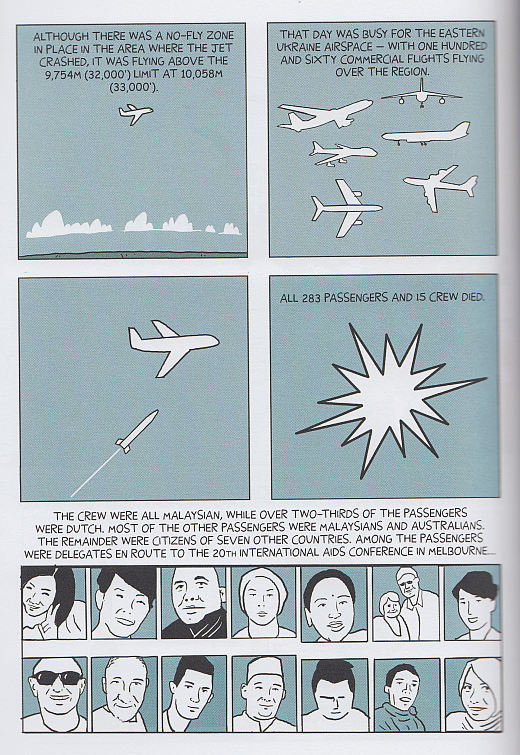 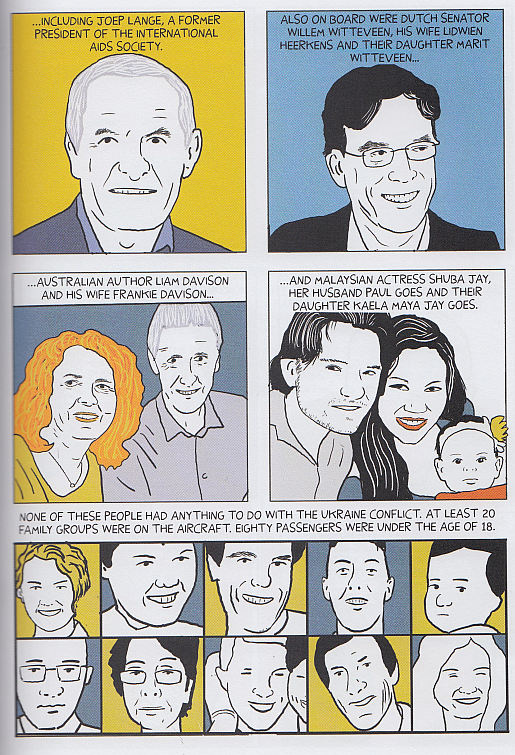 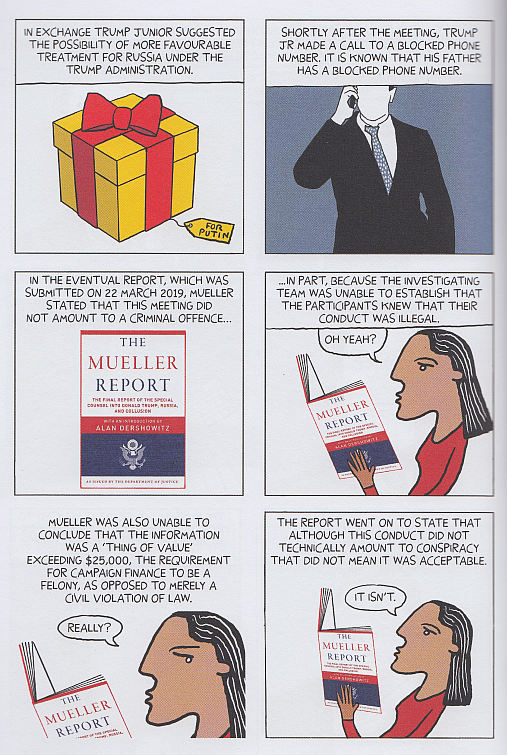 Behind it all, Putin. Who, naturally, spins out some obvious fabrications to blame someone else, not really caring if anyone believes him, because even if they don’t it spreads more confusion and mistrust in the West. It’s quite sobering, not to mention terrifying to see Cunningham so effectively laying out this rise from corrupt advisor in a city council to one of the most powerful men in the world, all, as always with his work, drawing on a huge amount of in-depth research that Cunningham somehow distils down into accessible, understandable narratives.

While much of the artwork here is familiar in style to some of his earlier work, there was also here, I feel, a more mature, finer-detailed aspect to some of the panels, especially those depicting some of the people. I felt as if he were trying to convey more not just of the emotion but also to do justice to the people he was depicting here. I felt this particularly strongly in the segment dealing with the downing of the MH17 airliner, where Cunningham doesn’t just cover the events, he takes some of the innocent victims and names them, draws their faces, tells us about some of them. They’re not numbers, not statistics, they are people, and clearly Cunningham wanted to make that clear: these are people, affected by the whims of a madman in another country, with living family and friends still mourning their loss and angry at the lack of justice for them.

Some panels on the Syrian conflict switch to a black and white, much heavier inked-line style, taking us through ruined cityscapes, in a style very different from the rest of the book, or indeed Cunningham’s more regularly-used styles I’ve seen before, and it is highly effective. It’s only a few panels, but their effect is powerful, it’s some superb cartooning work, conveying so much with just a few panels, and, like the MH17 pages, it packs a very strong emotional punch.

This is a story that really doesn’t yet have an ending – Putin is still in power, those who oppose him, even in the supposed security of another sovereign state, have a habit of dying mysteriously, he makes aggressive moves on the international stage, and is making plans to cling onto power for as long as he can (even rewriting the constitution) and to take steps to make himself legally unaccountable even if he leaves office. Where this complex, fascinating, disturbing history leads to, I do not know, but I will finish with some word from Cunningham, drawn from his conclusions:

“Murder and corruption should be punished, never rewarded. Either we support democracy, freedom of speech and the rule of law everywhere, or we will see these values wither away.”