This double review of the first two of Rebellion’s Complete Judge Dredd Case Files volumes (along with a bit of a look back at the very early 2000 AD back in the late 70s) first appeared on Emerald City back in 2006: 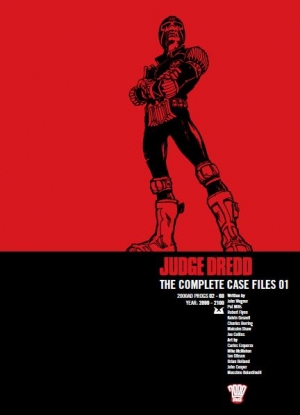 It is 1977, and a new international movie sensation called Star Wars is bringing SF to mainstream attention worldwide. In Britain punk rock jars with celebrations for the Queen’s Silver Jubilee. Something else is stirring in Britain though, a new science fiction weekly comic with the (then) futuristic title of 2000AD. With only Doctor Who and repeats of Space 1999 to watch, no VCR, no internet (no home computer!) and Terry Pratchett’s chart-conquering novels years away the kids (and some adults) were desperate for accessible SF. And here it was, in a weekly format in a comic you could actually find in any normal high street newsagent for “8 pence Earth money”. It was a comic book that would be an important career step for some of the best names in modern comics, including Alan Moore, Grant Morrison and Brian Bolland.

Judge Dredd was not the most popular character in the comic to begin with. In fact, he was not even in the first issue, making his debut with Prog 2 (2000AD has programmes, not issues). These days Dredd is known as the UK’s greatest comics character, and Rebellion are now collecting all of Dredd’s tales together in chronological order, from Prog 2 onwards, in large black and white volumes which are a little similar to Marvel’s Essentials series of graphic novel collections. Well, almost all of the tales — there are a few parts of the “Burger Wars” saga which certain fast food franchises have ensured will never again see the light of day. Some people have no sense of humour, while Dredd, for all its tough credentials, has always had a nice line in satire.

Even for readers like myself, who remember reading these tales the first time round, it is still surprising how different early Dredd is from the now-iconic character he has become. It is like watching early episodes of classic Star Trek, where the characters haven’t settled down and Spock seems a little too emotional — you recognise the characters but they don’t seem quite right compared to what you are now used to. (This is even more noticeable with DC‘s new Superman Chronicles which goes right back to 1938‘s first strips). The early Dredd is a little different, certainly much more human than he would appear in later years. He has a nagging Italian (stereotype) landlady, a comedy sidekick in Walter, his servant robot with an annoying speech defect, and he even smiles occasionally. The world of Mega City One too is somewhat different, with a mayor, a normal police force beneath the Judges, and citizens who are not quite as eccentric as they would become.

However, everything Dredd would become is here in rough form, including his incredible speed, reflexes and skill: the result of being trained since childhood in the Academy of Law. We are introduced to this establishment in the first volume, giving us a glimpse of children being inducted as cadets at the age of five, and of rookie Judges graduating years later to their ultimate test, action on the streets under the supervision of a full Judge. (In volume 1 we meet a character who would become a later regular. The future Judge Giant, then being trained by Dredd, is the son of the Aeroball player, Giant, from Harlem Heros, an early 2000AD future sport strip.) Dredd’s complete dedication to the law is made apparent straight off — littering will be dealt with as swiftly and harshly as robbing a bank. This has been a central aspect of his character ever since.

The fascinating and endlessly adaptable canvas of Mega City One itself is as much a part of the Dredd strips as the iron man of the law himself is. Even in some of the simpler, more basic early stories the reader is exposed to a fabulous futurescape of towering structures called Starscrapers (later called Cityblocks). These tower over the old Empire State Building (now a derelict building used by criminals to hide in). There are twisting roads which spiral up and around them miles into the air with no visible means of support, and fantastic future vehicles roaring along them (thanks to the imagination of Carlos Ezquerra). In fact so fast and numerous are these vehicles that MC-1 has it’s own version of Devil’s Island: a prison for violent offenders marooned inside dozens of lanes of constantly moving computer-controlled traffic zipping past at 200 mph. Underneath is the Undercity — a region so polluted it was concreted over — home to mutants and criminals (long before Futurama did the same). Few SF cities of the future had shown such an incredible vision since Metropolis. Bear in mind this is years before Blade Runner would stun our minds with its future vision of Los Angles. 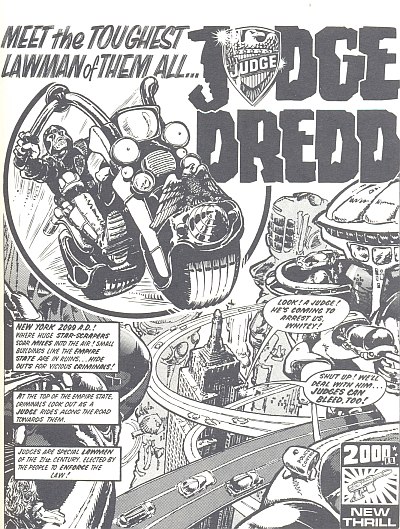 The 22nd Century world of Dredd expands incredibly quickly in these first two collections. After some standalone stories to establish Dredd’s character, we quickly get the first big multi-part story, The Robot Wars. This provides the readers with their first sight of masses of Judges acting together to protect the city. It has a wonderfully camp villain in Call-Me-Kenneth, the droid who leads the robot revolution against the “fleshy ones.” Later in the first volume we see Dredd on the moon, because he has been chosen to be Judge Marshall of the Luna-1 colony for six months. As well as showing us more of the 22nd Century, this gave the writers an excuse to introduce some amusing Western-style tales, including a showdown with a robot gunslinger. (Shades of Westworld, but even Yul Brynner’s robo-gungslinger wouldn’t want to face Judge Dredd!). In the First Lunar Olympics stories we get to see something of the other cities beyond what used to be America in this post-nuclear war future. These include the Sov Cities, complete with their own Judges. (This may seem odd to us now, but remember the stories were written during the Cold War when no-one imagined the Soviet Union would disintegrate).

Volume 2, although still very early (covering Progs 61 – 115) is, for me, where Dredd really starts to come into his own. The multi-part Robot Wars had been very well received and, although the standalone tales would always be popular, it is with the epic tales that Dredd really began to draw in a big readership. This second volume contains not one but two of these early epics: The Cursed Earth and The Day the Law Died. In the former we get our first real look at the radiation desert between the mega cities. The Cursed Earth, blasted and irradiated during the great atom wars, is home to criminals, mutants and even feral dinosaurs (resurrected in a Jurassic Park style for dino national parks, but free to roam after the wars).

Dredd has to cross thousands of miles of hostile terrain. He encounters mutant gangs by Mount Rushmore (which has a carving of then-president Jimmy Carter added to it affording a good visual gag when an attacking mutant in a hover vehicle is shot down by Dredd and crashes into those famous teeth). He also meets rabid Tyrannosaurs, corrupt mafia Judges running Las Vegas, southern slavers who brutalise aliens as slave labour, and even the last president of the United States. The latter was sentenced to 100 years in suspended animation in a vault in Fort Knox by the Judges for the crime of starting the great atom wars (at which point the Judges took over the government of the Mega Cities, the only remaining civilisation in America).

This is all undertaken on the pretext of delivering a vaccine for a terrible plague to Mega City 2 on the West Coast (air transport not being possible for rather flimsy reasons), but that is simply a device to set up a terrific series of adventures as Dredd travels the ruined America in his Land Raider (famously based on a then-contemporary Matchbox die-cast toy — yes, of course I had one!). His companions include his bike-man, Spikes Harvey Rotten, ‘the greatest punk of all time’, with his grenade earring, right out of the punk rock scene. It also affords a classic cover (reproduced in the collection) which epitomises Dredd’s iron constitution and utter determination as a Judge. Clad in the ragged remains of his uniform, Dredd struggles on his knees through the radiation desert towards the end of his mission. The speech bubble with the words:

“This Cursed Earth will not break me. I am the Law. I am Dredd… Judge Dredd.” 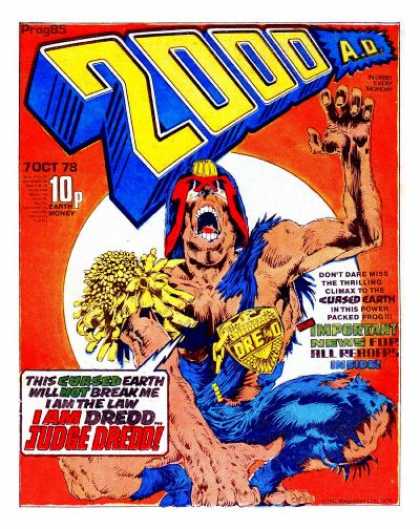 The Day the Law Died shamelessly mines the history of Classical Rome and the more eccentric (well, stark raving mad to be honest) emperors such as Caligula and Nero. Deputy Chief Judge Cal uses his own version of the Praetorian Guard, the Special Judicial Squad (SJS), to secretly assassinate the Chief Judge and seize power (Chief Judges rarely die in their sleep in Dredd stories). Cal assumes dictatorial powers. Most of the Judges are conditioned to obey him through subliminal messages hidden in their daily crime briefing tapes (yes, tapes – this was the 70’s after all). Dredd is recovering in hospital from an attempted assassination and so avoids the brainwashing.

Along with some old and injured Judges who teach at the Academy of Law, Dredd leads a desperate resistance to Cal’s reign while Cal himself becomes increasingly unhinged. He punishes one Judge by making him carry out his duties in only his underpants, boots and helmet. He appoints his pet goldfish as Deputy Chief Judge (“Hail Deputy Chief Judge Fish!”). Yes it does sound crazy, but real life emperors have done far worse. When Dredd’s group gets too close Cal brings in huge crocodilian alien mercenaries, the Kleggs, to terrify the population and finish Dredd off. Fleeing to the Undercity, the resistance end up with the eccentric, hulking figure of Fergee, the self-styled King of the Big Smelly (as the polluted Ohio River is now called). He is still one of the most memorable characters in Dredd history. When Cal sentences the entire population to die (he starts alphabetically with Aaron A Aardvark who changed his name to be first in the phone book) Dredd needs every ally he can get hold of if he is to save the city.

While reprints of classic comics material are nothing new, there has been a recent — and welcome in my opinion — trend by various publishers to reproduce classic series with good packaging, in their original chronological order and with respect for the source material and the fact that they represent important parts of comics history. Examples include Titan’s Classic Dan Dare library and Fantagraphics excellent Complete Peanuts series. This does not mean that you should consider these volumes to be merely for those interested in comics history or looking for a little nostalgia (although I plead guilty on both counts) — while they do fulfil both those qualities they are also what they always were, inventive and hugely enjoyable comics. Older 2000AD readers like myself will enjoy these but they are also a perfect introduction to the back history of Britain’s top comics character for newer readers and look set to build into an excellent full Dredd library over time.

1 thought on “Reviews from the past: a History of Judgement”