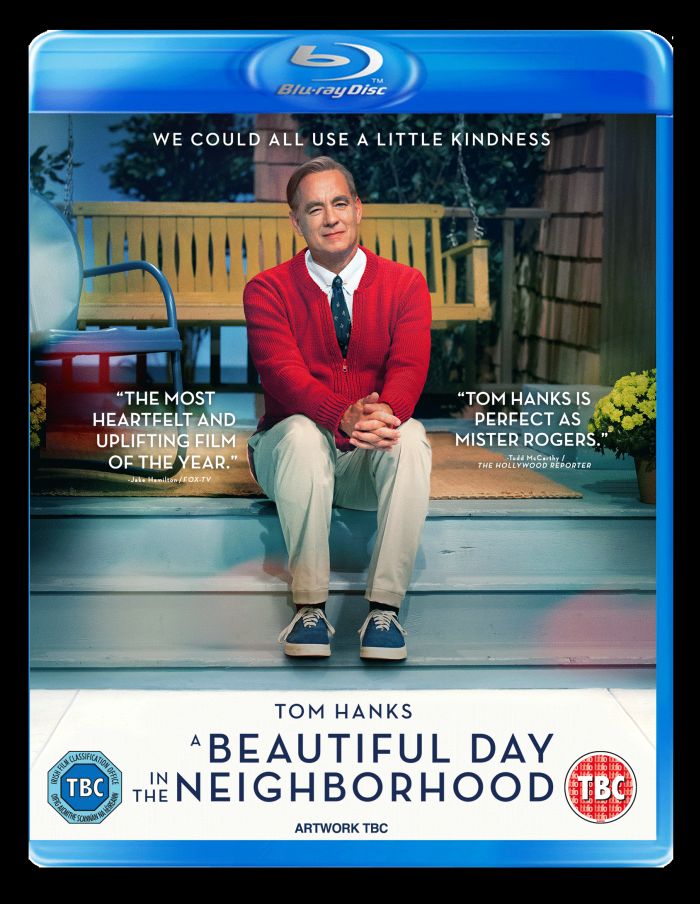 “You don’t consider yourself famous?”

“Fame is a four letter word, like tape, or zoom and face. Ultimately what matters is what you do with it.”

“What are you doing with it?”

“We are trying to give children positive ways to deal with their feelings.”

Fred Rogers, simply knowns as “Mister Rogers” to generations of child viewers, was an institution in American broadcasting for children, an integral part of many a childhood, a virtual friend to many kids who needed one, with his show, Mister Rogers Neighbourhood, which ran from 1968 to 2001 (with a small gap in the 70s). Like many in the UK I knew very little about him as the show wasn’t really known here, and most of what I knew about it I had picked up from references in countless American TV shows and films (the amount of times the show and the man are mentioned in so many different programmes and films gives you an idea of how embedded in the popular culture it was in the US, generations grew up with this).

Not being overly familiar with the show and so lacking that nostalgic affection for it, I was curious to see this movie (especially after it garnered praise at the highly respected Toronto film fest), but also rather worried that without that familiarity and affection for the show and the man, that I might not be able to connect with it. Well, that wasn’t the case – Marielle Heller and her crew and cast (especially Hanks, pretty much perfectly cast, and Rhys as the cynical journalist Lloyd) have crafted a film which is universally accessible to all viewers, regardless of their familiarity or lack thereof with the show, because this film is, at its very core, a film about the emotional depths of the human soul, about the dark places, the things that frighten us, worry us, make us angry, and how we can try to overcome them, about how it is is a good thing to listen, to be there for someone, to help, and in turn that it is okay to admit we are scared or angry, and to take a hand when it is offered. 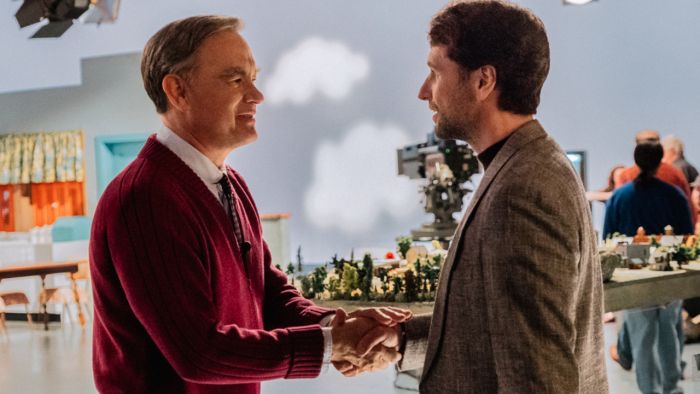 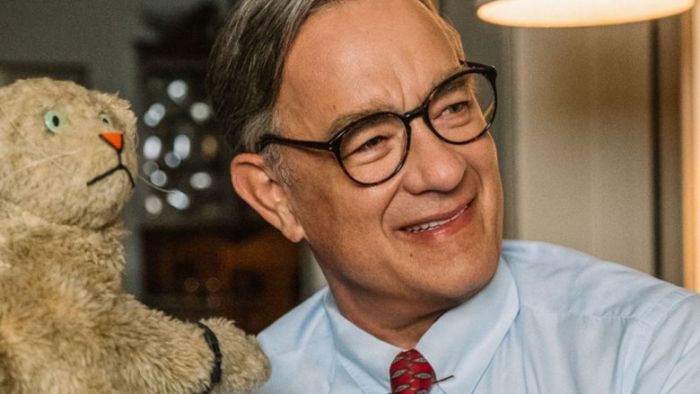 The film is not, as I first thought, a biopic about Rogers (played by Tom Hanks), rather it is inspired by a late 1990s article about him for Esquire magazine. Journalist Lloyd Vogel (Matthew Rhys) is a famous and respected investigative journalist, and more than a little put out when his editor hands him the assignment of a short interview with Rogers for a special issue on heroes. He’s far from happy, considering this a puff piece, and after his brief meeting with Rogers during a short break filming his show, he feels that there is something more here. While everyone loves Mr Rogers, he starts to think there must be something else, darker, hidden behind the home-knitted cardigans and gentle manner, and begins to plan a much longer piece on his own.

We’ve sadly become all too use to many much-loved popular culture figures later being exposed as something so far from their warm, public persona, and often feel a sense of betrayal, of another layer of cynicism added to our emotional armour when this happens. Here, however, the darkness is very much Lloyd’s own problems being reflected – his cynicism, his still simmering anger years later at the loss of his mother, of his estranged, womanising father’s betrayal of her when she was ill, his worries about responsibility for his and his wife Andrea (Susan Kelechi Watson) and their newborn baby. Rogers sees this in Lloyd, and with the same patient, understanding, reassuring approach he took to helping kids deal with emotional problems on his show, he gently befriends Lloyd, helping him to realise he can face that loss, grief and anger, but come through the other side. 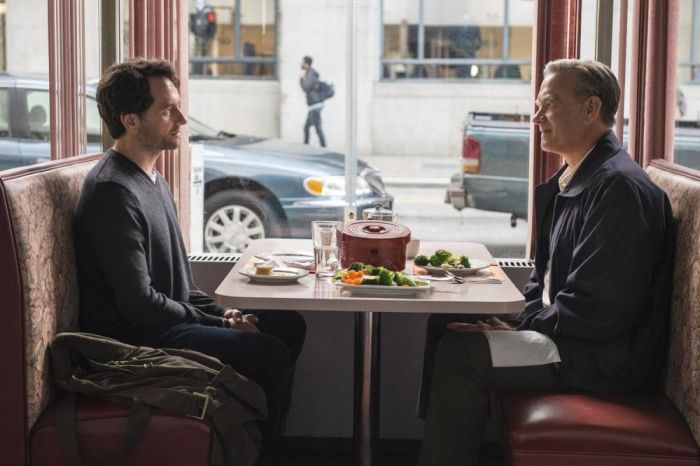 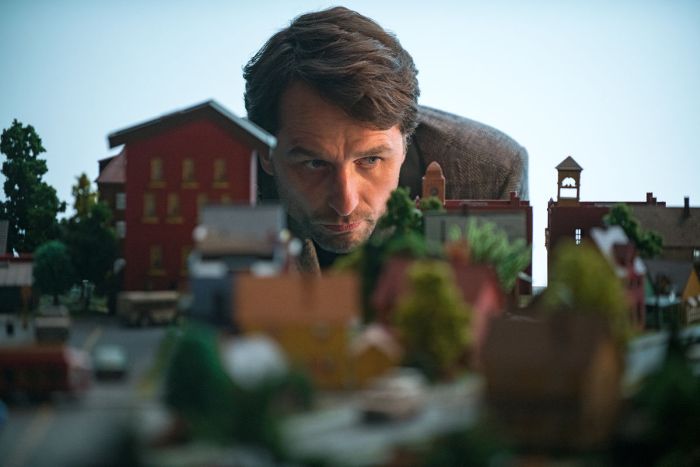 This really, really could have ended up being a sugary, shmaltzy, syrupy story. That it isn’t is a huge credit to Heller, Hanks and Rhys, who offer a quite beautiful, emotional tale that will want to make you both cry and smile, while also giving some lovely visual treats – the model of the neighbourhood that was used in the show re-appears here (as do the various puppet characters and others), but that model approach is then also used for the different locations throughout the film, a lovely touch (and props to the model makers re-creating this in the same style as the original), or Lloyd hallucinating himself to be the size of the show’s puppets, on the model set, being asked by Fred about his problems, or a moment with the pair on the New York subway, where passengers recognise Rogers and start to sing his theme song, to his delight.

No, this may be a feel-good film in many ways, but it avoids most of the normal, overly-sugary traps those kinds of films often fall into. Instead we have a piece which feels very empathic, emotionally – you may well find yourself thinking about moments good and bad in your own life as you watch (I certainly did). Neighbourhood takes us on that emotional journey, but tell us that it’s okay, that it’s only human to feel, that it is okay to be sad sometimes, that anger is normal, it is what we do with them, how we deal with them that is important, and how we deal with one another, that bad things happen to us sometimes, but so often there is someone there who wants to help, and it is not weakness to take that hand that reaches out to you. As our entire global community deals with stresses and strains of the pandemic, this may very well be an almost perfect film to enjoy. An absolutely beautiful, warm, emotional journey.

A Beautiful Day in the Neighbourhood is released by Sony on home digital from May 25th, and on DVD and Blu-Ray from June 8th