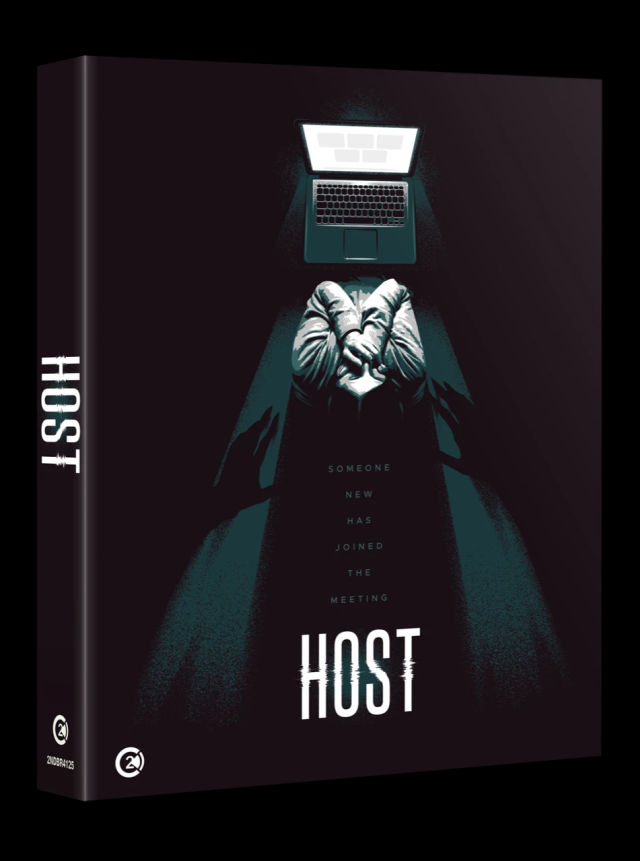 Six friends – Haley, Jemma, Emma, Radina, Caroline and Teddy – get together online for their weekly Zoom catch-up during the first, long months of Pandemic Lockdown, something we’ve all been doing a lot of over the last, grinding year or so, something that has become commonplace and everyday. As they are all separated under the Covid restrictions, these little online get togethers are a lifeline, as they have been to so many in real life, and to spice it up a little for this week, Haley (Haley Bishop), has invited a spirit medium, Seylan (Seylan Baxter) to join them and conduct an online séance.

It’s fair to say the chums are not taking this terrible seriously, and there is a lot of giggling going on, and a drinking game (take a shot everytime Seylan mentions the “astral plane” for instance), while Haley tries to get them to behave a little more respectfully to Seylan. As Seylan instructs them to reach out to try to contact someone they know who has passed over, Jemma decides claims to have felt a touch on her shoulder and a presence, which she thinks is Jack, a boy who was kind to her back in her school days, but who later committed suicide.

After Seylan’s spotty internet connection causes her to drop out, and with Teddy having left the chat because of his girlfriend, Jemma admits that she made up the character of Jack – he never existed, much less visited her from the other side – for a bit of fun, well, that’s when things start to go wrong. One of the friends has herself and her chair pulled violently across the room as the other watch in shock, another’s glass suddenly shatters, while Caroline thinks she saw a body hanging up in her attic.

The initial reaction of shock gives ways to uneasy laughter as they all assume they are trying to prank one another (in fact the story idea was inspired by director Savage pranking friends during an online meet into thinking he had a spirit presence in his house), but the unease grows and the laughter turns to yells and screams as each of them begins to experience unexplained phenomena, which become increasingly violent. Poor Teddy rejoins the chat in the middle of this with no idea of what has been going on, and finds himself right in the middle of it. They manage to briefly get hold of the medium Seylan again, and she warns that by making up a fictitious dead person to call on, Jemma has actually left an open door through which anything may have crossed, and that being is what is now attacking them.

The whole idea of a circle of friends who don’t really believe in spirits holding a séance for a giggle, then it all going horrible wrong and a malevolent spirit manifesting itself against them is, of course, far from new in horror, and using new technology like the internet for horror scares isn’t new either – take Unfriended, for instance, Pulse or early efforts like FearDotCom. But that doesn’t mean there isn’t a lot of horror delight to be had here, and the added element of filming this during the first UK Lockdown adds a new frisson of horror, with that weird combination of being physically isolated, with all the emotional, psychological damage that has had on us all, while still being connected to loved ones, but only through the tenuous ether of Wi-Fi (not hard to compare this to the ethereal connection to the other side where spirits are meant to dwell).

Each actor is in their own home throughout – Savage had to direct them remotely, while the team held workshops to help train the actors not only to film themselves but to set up simple but highly effective physical effects themselves. Connected but simultaneously isolated as this presence they have accidentally invited in manifests in increasingly harmful ways (this spirit does not respect the two metre rule!), the unfolding story makes each of the friends both participants/victims but also at the same time voyeurs as all they can do is watch on their video chat windows (inviting thoughts about the voyeuristic side of our social media in real life, and that connected yet disconnected feeling we often have).

While horror is a broad church, for me it has always been at its most effective when elements of it touch on aspects which any of us could have in our own lives. In the 1890s Stoker brought his Count out of the distant dark and superstitious land and put him right in the heart of the modern city, a world of typewriters and phonographs and everyday items; it made the threat feel more real than the distant lands and castles of earlier Gothic tropes. In Host we’re right into something everyone of us has had to deal with recently, the pandemic, the lockdowns, the isolation, the use of online lifelines, and the confined, trapped feeling that comes with it, and plays with it well; again it makes it more real, more relatable, and that, for me, pushes up the scare-o-meter.

I have to say I was incredibly impressed at the way Savage and his team managed to make a film under lockdown conditions – not just using the lockdown as inspiration for a story, but actually working within those difficult rules to create a whole film (albeit one that clocks in at just under an hour, which to be honest I didn’t find a problem as it meant the pacing was kept going well). Really, I doff my hat to creators who managed to work in such circumstances and still managed to pull together a highly entertaining horror flick, and one which had some really nice horror thrills, from the expected jump-scare of a sudden image appearing or door opening by itself to incredibly creepy moments, such as when a filter graphic appears in mid-air on one friend’s feed, as if the camera thinks there is someone there and it is trying to apply the filter, yet we can’t see anyone, just the filter face. 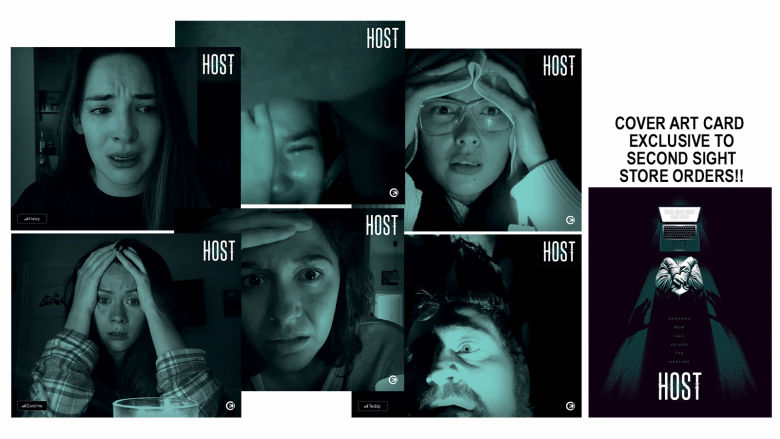 The tight pacing and relatively short length work well for this story (I think extending it would have weakened it), and again the use of Zoom as the medium helps here, because they are using the free version, and we can see the countdown to the end of the free chat session ticking away, the time running down as the action escalates, and we’re wondering what happens when the timer gets to zero, and if anyone will remain unscathed. And no, I am not going to tell you anything about what happens to who, because I don’t want to spoil it for you! Suffice to say the tension rises as the timer counts down, and there are some inventive and gruesome moments.

This was a Shudder Original, but I am glad to see our chums at Second Sight are doing a special, limited edition Blu-Ray release, which boasts the film, plus a slew of extras, including the cast being interviewed; again these extras were created during Lockdown rules and so, like the recently reviewed Nightingale, couldn’t be professionally filmed but had to be done via Zoom, but as with some of the Nightingale’s extras this in no way impacts the enjoyment of the extras (in fact in the case of this film it rather suits it, being a similar format to that used for the narrative).

It’s pretty remarkable listening to how the film-makers and the cast worked and often improvised their way to creating their parts of this film for Savage to then stitch together – again I am just amazed at how well the creative talent here rose to such a challenge. The limited edition also comes with more extras, including Savage’s original prank video that inspired the story, two short and highly effective films by Savage (Salt, and Dawn of the Deaf), a BFI interview and more, plus a case with new artwork by Thomas Walker, a set of collector’s cards and a book with the original story outline and essays. Highly recommended and inventive Lockdown horror.

This review was originally penned for the Live For Films movie site.