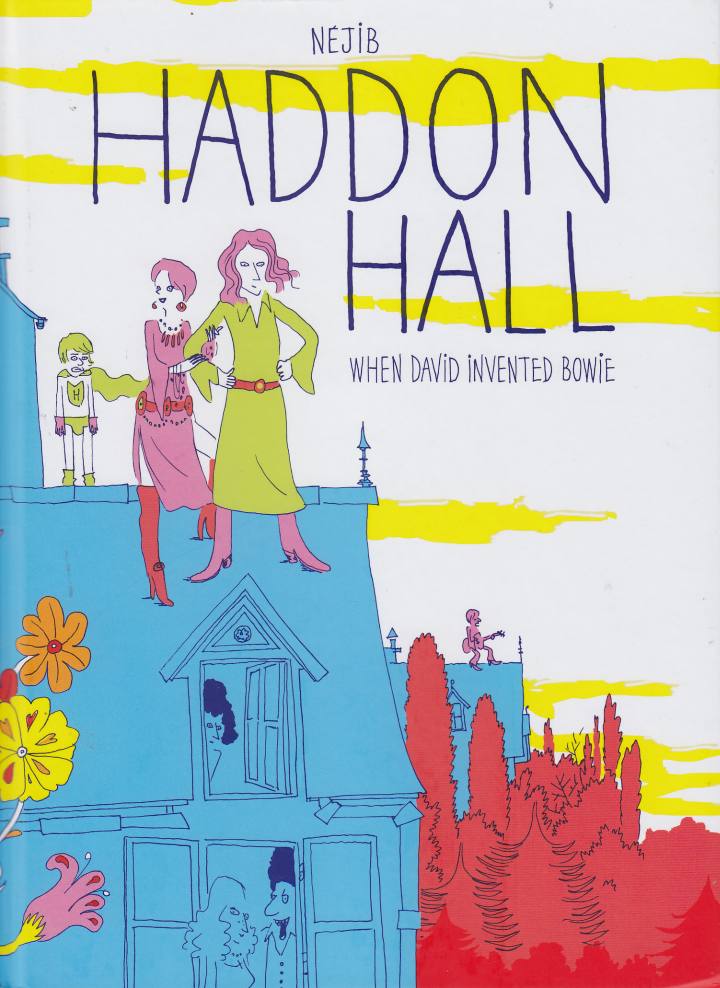 “It was the end of the Swinging Sixties. That day, like so many others, the London sky was sad, like a cold cup of tea. The nasty rain rattled tediously at my windowpane. I was waiting for my new tenants to show up and inhabit me.” 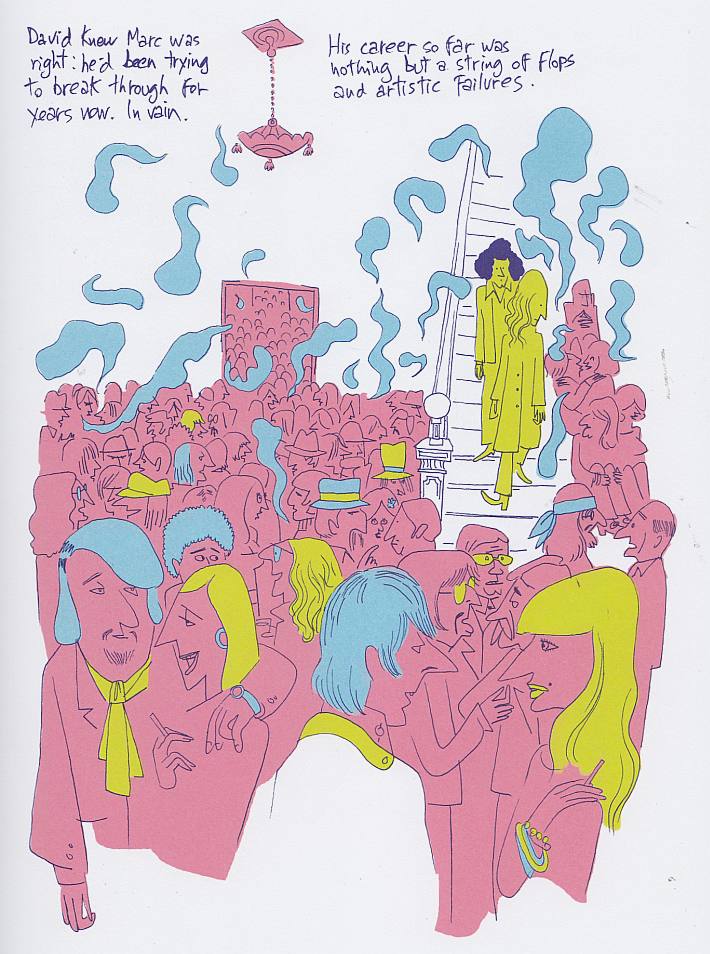 It’s 1969 and dawning into the early 1970s, and it feels like things are changing, socially, politically, artistically. A young couple have come to view a huge old mansion on the outskirts of London, a vast old property well outside their then fairly slim means, except that they intend to share it with a whole bunch of their artistic friends, almost like a bohemian commune. That couple comprises a very young David and Angie – David Jones, with a genuine hit under his belt (Space Oddity) but not yet broken through, not yet Bowie. The talent is there, the love of all sorts of music, the artistic sensibility, but something’s not quite clicked yet. And that’s what this book is about – not an exhaustive biography of the Thin White Duke, but a look at a crucial short period in which the artist who would become the master of reinvention first truly invented himself for the stage. And the worlds of music and arts were never the same again…

Interestingly Nejib avoids the normal biographical form of recreating known events in a person’s timeline and illustrating them one after another. This is telegraphed right from the start as we realise that we are seeing these artistic young people – and they are oh such bright, young things here – from the perspective of Haddon Hall itself, observing these strange, new, young people living in it, not put off like others by the “discreet decrepitude” of the old mansion but instead amused, delighted, charmed by its idiosyncrasies. It’s not long before they and a group of friends are sharing this huge home – at the house-warming party a long-haired David happily showing Marc Bolan around, the house so large they even have space to turn one big room into a rehearsal space. Every musician’s dream, surely, your own space in your own home to play and record and jam…

“But when the Last Judgement comes around for pop stars, I shall willingly testify in favour of our two wild blokes, for behind their outsized egos hid two true loves of music. The could talk shop till they were blue in the face.”

There’s some tension between them, a little professional and artistic jealously perhaps, as they both struggle to make it, to stand out from the musical crowd and leave their mark, but mostly what comes across here is a camaraderie, a friendship, and a deep, deep shared love of music. That sense of warmth and the love of music in so many forms suffuses Haddon Hall. There are other events going on at the same time as the struggle to make it as a musician – relationships, children, family. There’s starting a family to think of, and David’s brother Terry is in a care home because of mental health issues, while David is one of the few people he can connect with.

There are some beautiful scenes, like the brothers settling down, just the two of them, like they did when they were younger, to play records together, Nejib delicately illustrating the almost ritualistic form of this, the choosing of the albums, slipping them out of the sleeve, needle on record, perusing sleeve notes, blissing out to good music shared with someone who means the world to you, your own personal little world for a blessed few moments. It’s a scene so many of us can empathise with because most of us have done the same with friends or siblings; it’s a blissful shared moment of music and art that can bond us emotionally with someone else forever so much that each time we hear a particular song on the radio we think on that moment, laid back in our room with them and the music playing and how for a few moments everything is just right (and how even in bad times later those moments come back to us and help us cope). 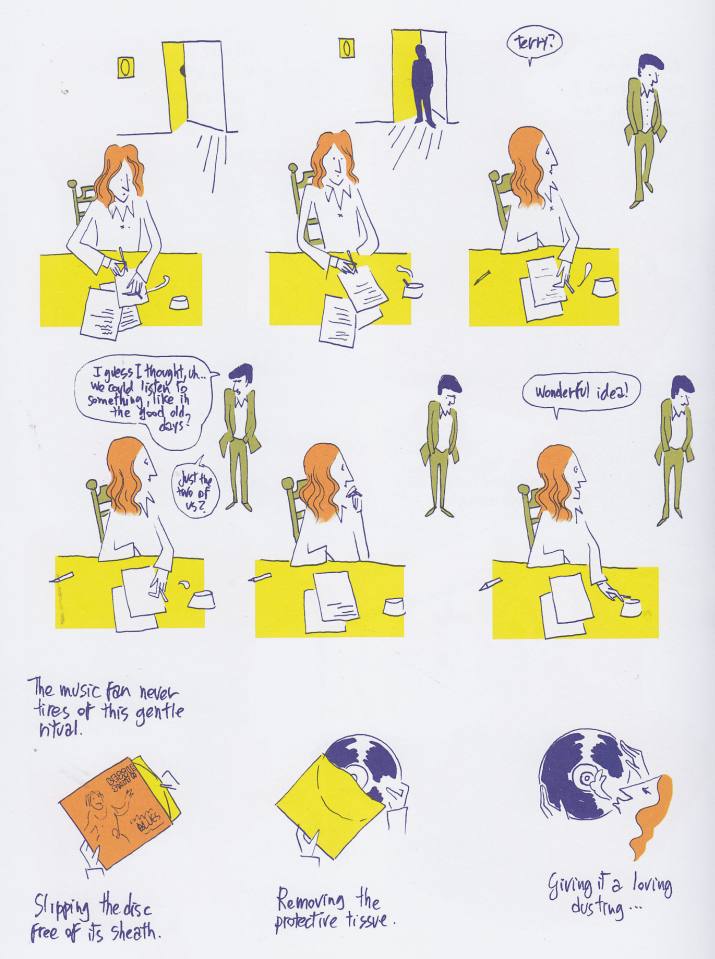 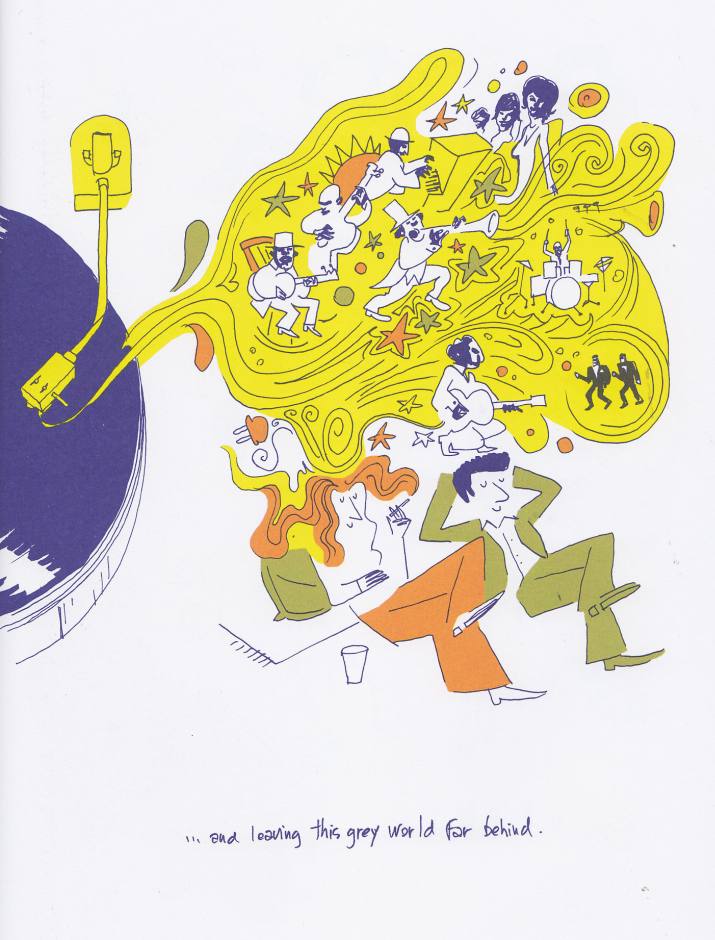 Those little, very personal moments counterbalance the larger moments in the evolution of David, as he reaches towards what will become Bowie. The BBC is showing the coverage of the first Moon landing, and there’s his Space Oddity being played to the nation’s television sets as one of the most remarkable feats in human history is finally achieved. There’s the need to focus more, to stop spreading himself about, to concentrate on this next album – perhaps his last chance to make it or else be dropped by his label (and this is an era where labels largely rule the roost, very different from today’s music scene, great if you have a contract and success, nightmare if you are a struggling musician trying to get in the door, no YouTube, SoundCloud or Twitter to build a rep with for the struggling newbie). There’s a tension in the air, like the pressure just before a thunderstorm, except here the prayer is for lightning to strike.

Nejib avoids going for a realistic look, sticking instead with a much more cartoony and loose style here (not even panel borders between scenes on the pages), using only a few colours per white page. It works stylistically with covering this story in a less traditional biographical manner (and face it, Bowie is a subject that deserves a non-traditional approach), although one slight problem is there are a few times where it takes a moment or two to work out who is who in some scenes! That’s not too often though and on reflection it may also be slightly deliberate, a visual way of referring to the androgyny of some of the styles of the period.

And there are some lovely moments worked into the art using that loose, cartoony style and limited colour palette, such as David and piano, all in blue, several scenes of working away hard, struggling knowing there is something there, not stopping for a break, pushing, frustrated, the litter of empty bottles and fag ends building up around him as he pushes onwards doggedly and… And then that wonderful moment when suddenly it clicks, the Muse flows, the colour of the figure changes from blue to green and from the piano erupts, a visual flowering of colourful music growing from his fingertips to the keys and out of the instrument to fill the house: it’s the birth of Life on Mars. There are several other scenes which capture that lightning in a bottle moment of creation beautifully, the real emotional jolt and deep satisfaction that comes with creation, be it music, painting, writing, that moment when it suddenly flows and you know you’ve got it. It only lasts a short time before we have to chase it again, but just for those moments it’s like communing with the gods … 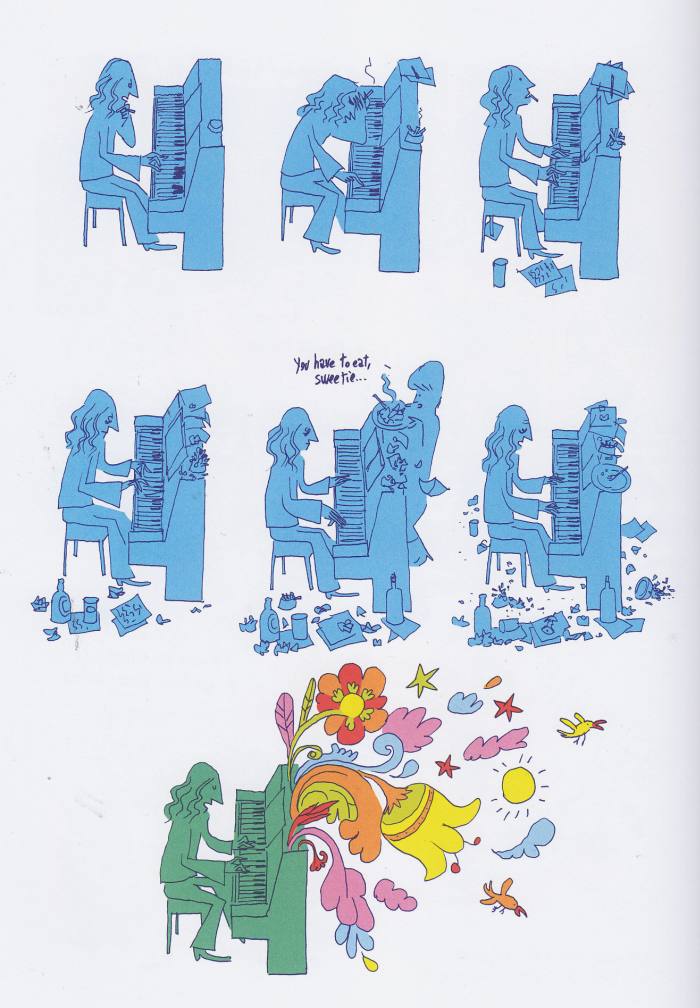 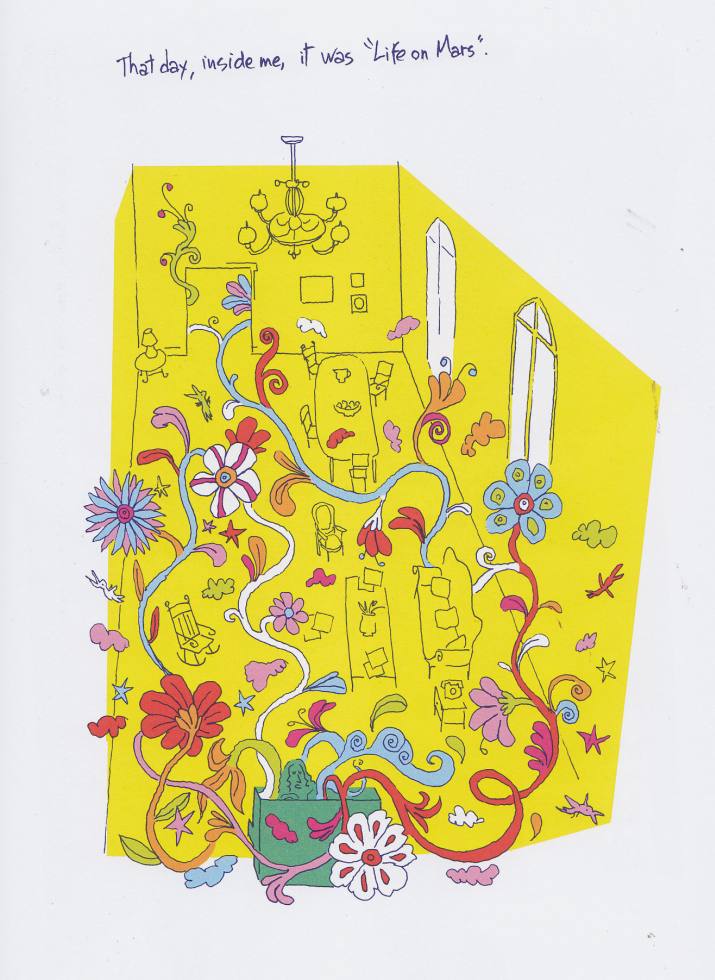 This is a beautiful homage to one of the great musical and artistic influences of the last half century of pop culture, one many of us adored and one whose loss we felt deeply just last year. And here he is, on the cusp of it all, young, trying it all, reaching out for that future, among friends, family and the music. Nejib doesn’t exhaustively document like some biographies, instead crafting the style, the taste, the flavour of the era, of changes (pun intended) of zeitgeist and possibilities and magic in the air, if only you can grasp how to control and channel that magic, and how that magic is shared with the rest of us, incorporated into our own lives and moments (can you imagine going through this life without it?). Stick on some classic Bowie on your stereo, and then lie back with Nejib’s lovely book and just groove.