Over the last week or so of August I was busy enjoying the Edinburgh International Book Festival, both as an audience member and as a participant again (I was asked to chair a couple of the Stripped events in the festival’s comics strand). There was more on than I could fit in, especially as I was busy preparing for the two talks I was involved in (reading away and trying to think up some different questions and knowing full well chances of asking an author something they’ve not been asked many times already are slim, but still we persevere…). 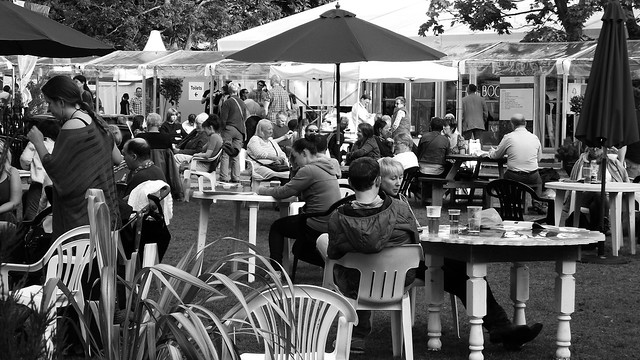 As chance would have it most of the comics-related events I was at all fell within a few days of each other, starting with chairing and event with Karrie Fransman and Rob Davis. This was a very satisfying one for me to be asked to chair, I have to say, since I’ve followed Rob and Karrie’s work for some time. Both authors introduced their latest works, Karrie with the fascinating, multi-voiced approach of Death of the Artist, and Rob with the wonderful mixture of grounded realism and the fantastical in the Motherless Oven. Rob explained a bit more about the level of metaphor and symbolism in The Motherless Oven, and the way the comics medium allowed him to also make some of these metaphors visual, something prose couldn’t do (which isn’t to say there hasn’t been some very effective use of metaphor in prose and verse, of course, but comics does have that added extra trick of the visual). 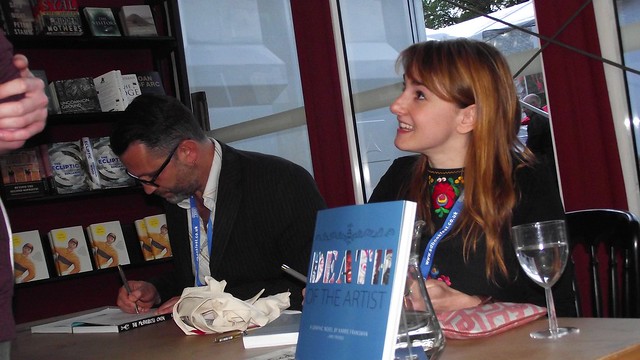 I thought Motherless Oven worked as it was, but also felt with the elaborate world-building for this alternative world that Rob had put into it, that it was open to other tales in this setting, and he confirmed this was the case, that he had actually planned more with SelfMadeHero, although with the fairly sensible proviso that they would see how the first book was received (fortunately it was very well received), so we should be seeing more, I’m glad to say. Karrie explained about the multi-author approach to Death of the Artist, as five former college chums now in their thirties try to recapture a bit of their energetic youth and art. I was already familiar with the concept – look away if you don’t want to know something major about this book! – that in fact all five authors here, telling the same story from different angles, in different styles, are all actually Karrie, the author essentially being her own choir as well as conductor. I didn’t know, however, that the “friends” in the photo-comic chapter are actually all actors, with a clever bit of Photoshop used to de-age them all for their supposed college-time snaps. It turned into a three-way conversation and we could easily have carried on longer.

The following day I was again on chairing duties, this time with a writer and artist I hadn’t met before, Evie Wyld and Joe Sumner. Joe is an illustrator, model-maker and sculptor, now adding comics artist to his quiver, and he talked about how the whole approach o the art came about slowly, some ideas started then junked to be begun once more as he learned effectively on the job – being an artist is one thing, but there’s a lot more to comics artwork than simply drawing the art. He and Evie had known each other for years and they worked on this project between their own main jobs – something many comickers can empathise with, I am sure – and in fact this process took place over several years, so they had time for writer and artist, both fairly new to the comics game, to refine what they wanted to do, the shape of the story and the art changing significantly over the period of their collaboration until it took the form it does in the finished book, Everything is Teeth. We discussed Joe’s different art styles – the cartoony style for young Evie and her family, a very realistic approach for the sharks themselves, and the fantasy/fairy tale aspects of the work as the sharks become not just real-world scary creatures but take on a symbolic role similar to that of monsters in fairy tales. 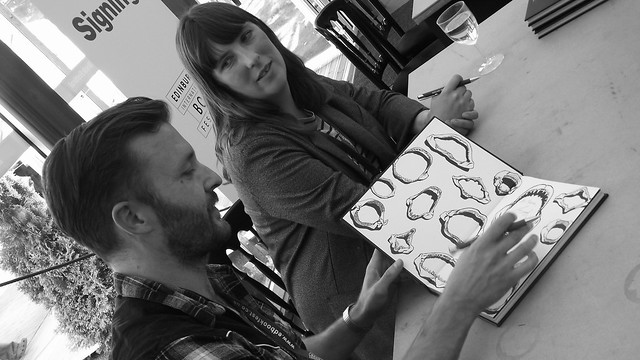 Evie also noted that in writing for comics as opposed to her prose work she really had to boil down the words – something she and many other writers will do in prose anyway, of course, starting with a rough work and then editing and pruning, but with comics requiring far less text there was much more work in distilling the choice of what words she would permit herself to use and where (I think they both did a remarkable job, the prose and art works beautifully for both story and a strong sense of place). It was an engrossing talk with two creators already with a solid creative track record in others fields (Joe’s aforementioned arts work and Evie who has a number of literary awards for her fascinating prose novels and made the influential Granta Best Young British Novelist list) as they collaborated on their first comics work project (and yes, they did enjoy it and they are considering another collaboration, quite possibly something tilted towards horror, preferably the creepy, chilling kind of horror, which I like the sound of). It was terrific to meet them and I look forward to them producing more comics work in the future – my recent review of Everything is Teeth is here, and I highly recommend this fascinating book (and also recommend picking up Evie’s two prose novels, which are very immersive).

Another day, another comics event, and another double-header, this time a shared theme of comics and politics as Teddy Jamieson talked with Martin Rowson – surely one of our best political cartoon satirists? -and Jean-Pierre Filiu, former French diplomat, historian and academic, who worked with acclaimed European creator Davide B (Epileptic) on the first two volumes of Best of Enemies (a third is planned), a look at American interaction and intervention in the Middle East, going right back to the 1800s and some history many will never have heard of (and you have to love the cleverness of a book which mixes the oldest written tale, appropriately from the Middle East, Gilgamesh, with actual words used by George Bush to justify his ill-conceived foreign adventures). Filiu also talked with much admiration about the work of Joe Sacco (an author Rowson also professed much respect for), and I was rather satisfied when he mentioned that he not only admires Sacco’s works, especially Footnotes in Gaza, that he uses it in his lectures and classes. He also spoke of the quality of research Sacco carried out – not only with multiple first person interviews but then trying to source documentation to validate what the eyewitness testimony claimed. Filiu’s insights into the region are remarkable and one of his simplest recommendations was also one of the most effective, that world leaders should know something of the history of the region before getting involved. He was ultimately optimistic that eventually – who knows when, though – the region would solve its problems, with or without the West (or these days perhaps the East). 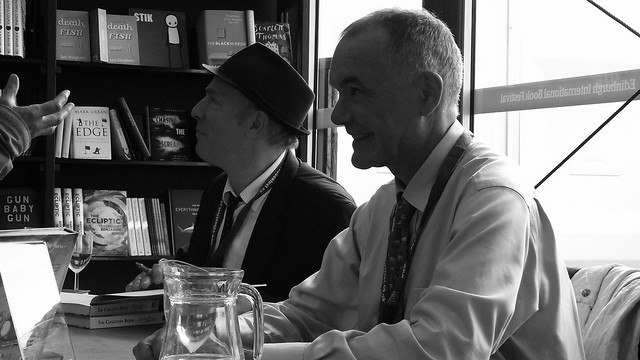 Rowson, making another return visit to the festival, was on exceptionally fine form, discussing his latest book, The Coalition, covering what he refers to as the worst government in his lifetime. Well, he was after he dealt with a phone call – his phone rang just as the event was starting, and turned out to be his daughter calling to remind him to switch off his phone before the event! His loathing for some of these politicians was evident in both his talk and in the artwork he was showing, as he explained how he visualised the previous administration, such as the luckless Nick Clegg (as Pinocchio, the boy who wanted to be a real politician, and being made of wood he could use him for all sorts of other visual metaphors – broken up as a wheel, sawdust, used as a broomhandle), or shiny-faced PM Cameron as Little Lord Fauntelroy.

The language turned bluer than a a conservative’s rosette on several occasions – those of you who have heard Rowson talk about his craft and the politicians he covers will not be surprised to hear he flayed them, and indeed he sees that as his task, to scour these public figures and hold them to account. His satire was also turned on those who report on the politicians, notably controversial BBC former head politics reporter Nick Robinson, who had by coincidence had been at the festival days earlier and used it and a newspaper article to attack politicians he felt had a go at him for perceived bias in his supposedly neutral coverage (a major talking point here in Scotland during the Independence Referendum) – interestingly Rowson had created a cartoon about this possible bias in his reporting work and showed us the cartoon (which got a fair cheer from the mostly Scottish audience, I noticed). And even more interestingly he noted that Robinson reacted to this cartoon by telling him he had been “unfair”. Unfair?! Rowson exclaimed. He’s had many subjects of his satire contact him to swear at him, threaten him or tell him he is talentless, but, he added, Robinson is the only one ever to say he had been “unfair” to him, and left us to make of that what we would. 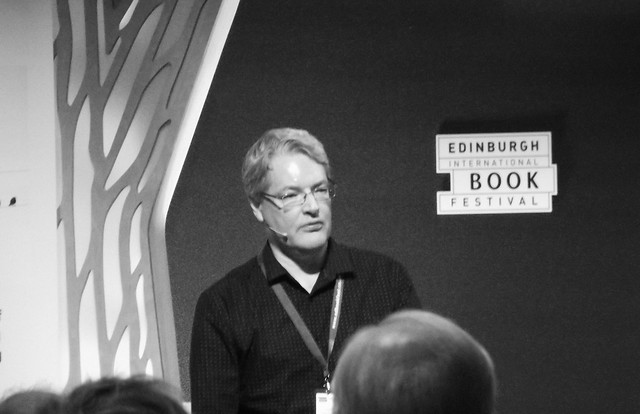 On the last day of the festival I finally got to meet one of my favourite of the current crop of new British comics talent, and indeed a creator who, several years ago, used to be our very own cartoonist in virtual residence here on the blog for some time, Darryl Cunningham (no, I’m not sure how it had gone this long without me actually meeting him in person either). Darryl had been invited to join Swedish writer Katrine Marçal (author of the deliciously titled Who Cooked Adam Smith’s Dinner), Darryl discussing some of what he discovered in his huge amount of research for the brilliant Supercrash, a comics investigation into the causes and effects of the shattering 2008 global financial meltdown, while Katrine’s work took a more gendered view, economics with a female perspective, very interesting.

I was also delighted when asked about terms like graphic novelist or journalist, Darryl explained he is a cartoonist and he makes comics – albeit ones which regularly require quite massive amounts of research, and he discussed how he set around distilling this research into something he could work with for the book, and which would allow him to get over some frequently complex concepts to readers in an accessible and understandable manner. And given some of what was going on in the financial world, that was no mean feat, but he certainly managed it. It was a very well-attended event and, despite the complexity of some of the subjects both authors, as they had in their books, did a very good job of keeping the conversation on a tack the audience could follow and indeed engage in during the audience Q&A at the end. A very nice ending to my 2015 Book Festival outings, and naturally several more signed editions for my collection…