Well, Tsotsi did indeed end up pipping Serenity at the post for the Standard Life Audience Award at the Edinburgh International Film Festival and also took the Michael Powell award for best British film. Actually it was a nearly 60 year old film by Michael Powell which was my favourite movie of the entire festival. Yes, I adored MirrorMask and I really enjoyed Thumbsucker (could it be this year’s Napoleon Dynamite or Garden State?) but it was this movie from 1946 which stole my heart: A Matter of Life and Death.

Like me I suspect many of you will have caught it on the television – its one of those movies that turns up on BBC2 on a wet Saturday afternoon. An incredibly young David Niven is a bomber pilot in a failing plane, approaching the coast after a raid. He talks to an American woman on the radio and tells her his crew are all safely out except for his who ‘bought it’. He is going to bail out himself soon – but he doesn’t have a parachute, it was shot to bits. The fall is better than staying in the plane to be burned alive though, he reasons, so after an incredibly touching chat with this young woman he knows he will never see he bails out into the swirling mist.

Except he doesn’t actually die. Waking up on the beach he thinks at first he is in the afterlife. Spotting a black he exclaims delightedly that he always hoped heaven would have dogs! He soon realises he isn’t dead – although no-one knows how he lived – and meets the radio operator. They fall instantly in love before his celestial conductor appears belatedly to take him to the afterlife – he got lost in the fog you see and missed him. Now our hero was prepared for death the day before, but now he has too much to live for and refuses to go, instead placing an appeal in a heavenly court.

The film is incredibly imaginative – the views of heaven are wonderful with separate receiving rooms at the end of vast moving staircases for different people. His is sitting in the waiting room of the reception area for flying crews, waiting on his skipper to join him, while other deceased airmen of all nationalities arrive, signing in as huge conveyors bring their wings to the reception desk. Home was never like this, remarks one young Yank flyer. Mine was, sighs another. Then the bomber crew cheer up when they see a Coke machine and rush over! It’s such an imaginative scene, yet while it is very funny the underlying subtext is terribly sad: these are all very young men with everything to live for, but here they are, dead. Coming so soon after the war the emotional impact on the contemporary audience then must have been even more incredible.

We never find out really if the events which play out are true or the product of our young aviator’s mind. He has a neural injury we discover later on, which may be manifesting itself in this series of highly constructed hallucinations; luckily for him his new love is friends with an exceptional Doctor who realise regardless he has to help him ‘win’ his appeal for life, if he fails it could destroy him mentally even if it isn’t real. Unspoken but nevertheless very clear is the issue of survivor guilt; ‘why me?’ ‘Why did my friends die and not me?’ The terrible burden of living after a traumatic event is evident in there, something most of the 1940s audience would have understood very well I suspect. The cure is good friends and, of course, love. The film has that sweeping romance typical of many films of that period, yet despite the ‘darling, I love you’ scenes it is never truly slushy, being informed also with a certain wit and cynicism to balance it.

I’ve watched A Matter of Life and Death a number of times on TV but this was the first time I’ve ever seen it on a big screen. The mix of black and white for the afterlife and early colour for the living world is both clever and quite beautiful. The mis-en-scene, detail, use of shadow, the play of the camera with light and angle are all astonishing; they must have seemed even more amazing to the original audiences, sitting in the grey austerity of post-war . Like Powell’s The Red Shoes (which we caught on Sunday) the colour sequences have that (to us) unusual quality caused by early Technicolor processes, seeming more lurid and less natural than we would expect of colour photography now. In the fantasy context of both of these films that is a strength however – the Red Shoes may be about ballet, not my favourite subject, but it is so wonderfully beautiful I can watch it again and again. Like a Matter of Life and Death it is luminous. 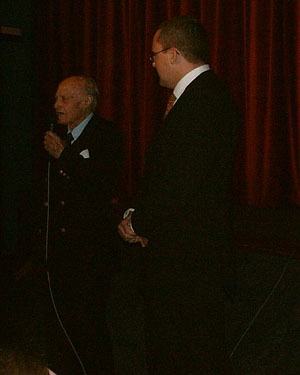 The man who photographed them for Powell was Jack Cardiff, a legend among cinematographers the world over. In a fabulous surprise, before A Matter of Life and Death begun a charming, little old man was brought out before us all: Jack Cardiff himself. He told us of meeting Powell in the mid 1940s, getting his first full work with him, of many famous films now timeless classics. As he wound up and invited us to enjoy the film I swear he became more spry; he had walked up to the front of the screen like and old man but he left it with a spring in his step and a huge, infectious smile on his face. It was as if this gorgeous film and the warm memories he had shared with us all in the cosy darkness of the cinema had re-invigorated him; what a delightful introduction to such a gorgeously moving film and certainly one of my highlights of my movie going life.