Wow, just don’t seem to have had much time to blog on here this last week. Been catching up with some friends for drinks and movies and the Book Group (Sheri S Tepper’s Grass this month – and we were in a beautiful library room in a hotel in the West End we were allowed to use). Went off for a road trip in Gordon’s new car (with Bruce the dog sniffing around in the back trying to sort out which of these new windows he should stick his nose out of first) and headed over the Forth and up to Saint Andrews. Gorgeous, clear sunny day, very spring-like after the recent cold, snow and rain (and that was just in my leaking bathroom). In the Kingdom of Fife the hills were still coated in snow, shining bright in the spring sunlight while the fields were brown and green. Around one summit we spotted folk paragliding – guess the sunlight reflecting from the snow up there must give good thermal lift. 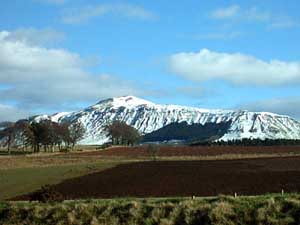 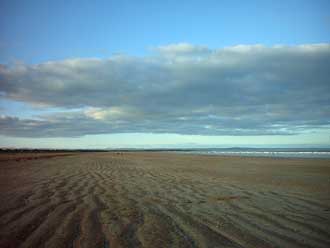 Saint Andrews was sunny and bright and with not too many tourists yet; relatively few rich, elderly Americans in garish tartan trousers out on the golf course (amusing to think those self same awful tartan trousers with the addition of a few extra zips would be coveted by modern punks). These pics were taken only forty miles apart – snow covered peaks in one, long curves of sand and sea in the other, although there were more snowy mountains in the distance, right on the horizon where the beach tails off too, but they can’t be seen clearly in this picture. Seeing a range of them in the distance was like being in Middle Earth and staring off towards the Misty Mountains.

Caught several movies over the last ten days or so as well. The Life Aquatic really didn’t know what it wanted to be: relationship drama, broad comedy, satire about aeging and the nature of heros. It was pretty rudderless (yes that is a nautical pun, sorry) but it was possessed of so much quirky charm that I forgave it and enjoyed it anyway. It certainly had some visual flair – the cross-section moving through the ship was brilliant and the use of traditional stop-motion animation for the bizarre creatures and semi-surreal underwater sets was lovely (the trip in the submarine reminded me of an early 20th century movie by George Melies). Robots was terrific fun – not as good as the Incrediblesof course, but pretty fun and sharing that same CGI that is so good it looks more like they filmed real models and sets, it looks so solid -and not too many pesky kids screaming (really, these films are too good for the kids!).

Constantine however was not so wonderful. It wasn’t a total bust – taken as a straightforward, not overly challenging action-thriller with lots of (very good) special effects it is fine as a bit of forgettable but enjoyable tosh. However, if like me you read all the comics it was ‘based’ on (I use the word loosely, as the film-makers obviously did) it was very disappointing and shared very little in common with the character from Hellblazer (especially the early Jamie Delano & Garth Ennis stories – Yuppie demons in Thatcher’s London buying souls? Genius).

Oh well, Sin City looks like being a far more true-to-the-source adaptation to look forward to (and visually amazing). Not convinced about the Hitchhiker’s Guide – how will it work for someone who grew up with the original radio shows, books and TV series? Guess I’ll find out – should give it the benefit of the doubt; certainly the trailer looks good. On that front the new Star Wars trailer also looks good but I refuse to get too excited since Lucas has disappointed me (and so many others) before… But still when Vader rose up in his black helmet it was hard not to feel a little tingle of hope…