There is an excellent series on the History Channel on Sundays at the moment on cartography and the great age of exploration. This week decided to spurn the more (unjustly in my opinion) famous Columbus for the scholars of the Saint Die school who were not only master cartographers of the age (and this is an age when maps are state secrets because, like words, they have great power) but radical intellectuals, pushing the barriers of human knowledge in a time when it could be dangerous, even heretical, to challenge the status quo (read Catholic Church) view of how the world was.

They took charts from Amerigo Vespucci, a great explorer almost unknown to most folk today, who is almost certainly the first European explorer of that age to land in mainland America (beat to it by the Vikings, but they didn’t come back and by the Sinclair lords of Orkney in Scotland who did and left carvings of New World crops in Roslin Chapel to remember them by). He was the first to realise this land mass was a continent, unlike Columbus (who never set foot on it) who still assumed he had found a far western archipelago of the East Indies…

Only one fine example of this amazing map, called the Waldseemuller Map has survived in a German collection. Eventuall, after a century or so of trying, the US Libray of Congress finally secured it for their collection. Why such perseverance? Well, look at the map. Look at the name of the explorer. Amerigo. Continents were then normally given feminine namings, which lead to ‘America’. And there it is on a distorted map which nevertheless still has some parts of Florida recognisable. The first time it is drawn, the first time it is named. How little they could have known then that they were naming such a vast land. 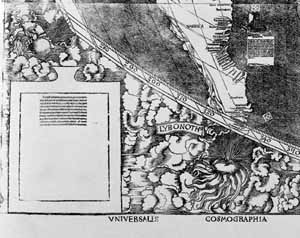 I don’t know about anyone else, but as a boy the tales of the great explorers were amongst my favourite reading. The tales of adventure, daring, danger and wonder astonished me. They still do. Many of thsoe explorers disappointed me in later life when I grew up and found many were greedy men out for gold and power, but some still inspire, like James Cook. An explorer a fine sailor, amazing navigator, a man who looked after his crew in days when many did not and also a scientist. This series covers the time when our world was largely unknown to us. It is hard today when we all see a satellite view of our home on the TV weather to realise that once we simply did not know what the world looked like. Was it flat? Round? What lay out inthe great Atlantic ocean? Were there really lands with giants? The wonderful embellishments on those maps then were partly decorative but principally they were a way of marking the limits of the cartographer’s knowledge. ‘Here be dragons’ is perhaps something of a cliche nowadays, but once those dragons were real. They were dragons of darkness and ignorance of our own planet and like the mythical dragons they had to be challenged to relinquish their treasures. Imagine sailing out into the unknown in a small, wooden sailing vessel, literally sailing off the edge of the map, truly going where no-one had gone before. When people argue today that the space programme is not worth the money or time I point out that without this urge, this need to explore and to learn our civilization would still be in the Middle Ages. Exploration is in our blood. It drove us from the trees, across continents and then across vast oceans and one day, across the stars. Oen day someone will look back at our generations and marvel at their early star map and basica rockets and the achievements they created with them and wonder about our great age of exploration.