Easter at the beach

Finally back on the air after most of a week without broadband – when I got home from work on Monday I noticed my cable TV was out and reported it. After dinner I tried to log on with plans to try and do some extra work from home because there was a ton on at work, only to find out my broadband was also out. Since both services come in through the same junction box I was wondering if there was a common fault. Phoned Virgin (who took over from Telewest and haven’t really impressed me since they have) to try and report the second fault and this was the start of almost two hours of being pissed around, put on hold, transferred, lost, having to phone again, on hold, lost, told to call a different number for broadband problems which turns out to be a premium rate number so you have to pay Virgin to tell them the service you pay them for isn’t sodding working. No, not impressed with that at all, how utterly crap is their customer service?

In the end the engineer who came out wasn’t told of the second fault – again how crap are Virgin at looking after customers? – but was happy enough to look at both. Thursday evening was the earliest they could send someone (which didn’t make me any happier, 4 days with no service), they were supposed to come after six so I could get home from work but the eejits at the help desk never bothered to pass this on to the poor engineer who rings my mobile at 4pm to say he is outside my flat. I was obviously still at work. He has more appointments later and can’t come back. Now being without cable is annoying, but I have already been most of a working week without broadband and a week when I had more on than I could deal with at work and needed to try and do a bit extra but couldn’t because of this. And now I’m thinking when the hell will they next get out? Luckily the engineer who is used to this sort of problem – they rarely pass on time requests to them – phoned his boss direct and arranged someone to call over the holiday weekend and its all sorted, but I’m inclined to write a stinker to Virgin, assuming they bothered to read it since I have emailed them before about parts of the way service has changed since they took over and they never bothered to reply. This is the same company who wants to offer space flights in a few years? Richard Branson, you are an arse and you should sort out the customer care for your terrestrial companies first.

Anyway, back on the air, catching up on a week of missed emails – including first pics of my new wee cousin just born in Canada last week – and getting round to sorting more Paris pictures for my Flickr, but before I put up some more Paris pics and video, something a little closer to home: 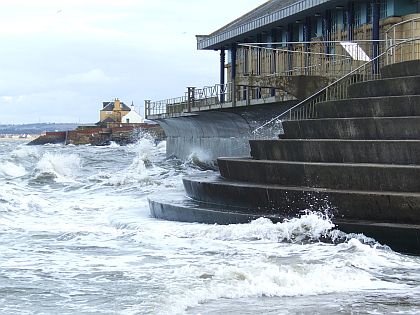 Spring has sprung and the locals flock to the sun-kissed beaches of Portobello, Edinburgh’s Rivieria :-). In true British fashion we have had some mild spells during the winter which means flowers were starting to grow in early February then as we hit the Easter holiday weekend we get snow, hailstones, rain and driving, bitterly cold, icy wind. My friend was taking his dog (Bruce the greyhound, who has graced these pages before) for a walk but with the weather so changeable we just went down to Porty to let Bruce gallop along the beach. It was one of those days of rapidly alternating dull, overcast weather as large gray clouds came over, only to scud away just as rapidly with the high winds to leave you in sunshine, then back to cloud, sun, cloud…

Through it all the howling, cold wind which cut through you and drove the sea into foamy gray-green wildness. Especially further down where the good beach at Porty gives way to stone steps and a sea wall, where the waves were crashing into it then rebounding back outwards with undiminished ferocity to hit the incoming waves, resulting in huge explosions of foaming water, often coming up high enough to soak the promenade where I was filming from, a good 8 or 10 feet above the water. Welcome to the Scottish spring!

I was attempting to supply a little commentary on this video, but I think the wind drowns out most of it. In case you are wondering I was basically doing my bit for the tourism industry and advising anyone watching this who was thinking on visiting our beautiful land to bring something warm. And waterproof. Still, although the beach was almost deserted despite the school holidays (a small blessing of the weather, less screaming kids to deal with) some folks didn’t seem to be put off by the weather, happily out playing in the waves with their jetski: 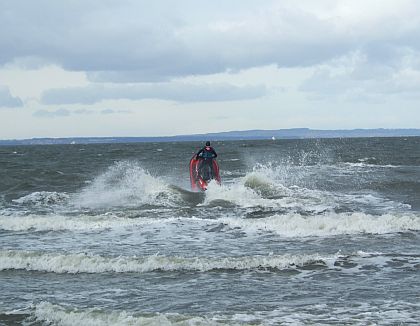