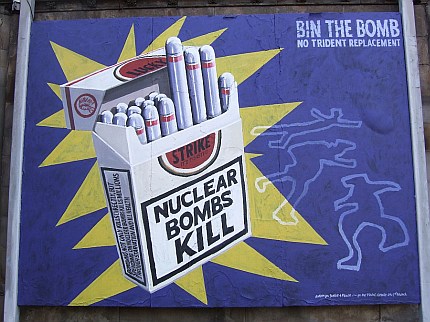 The church of Saint John’s on Princes Street often features some thought-provoking and satirical paintings commenting on current events. Since recent weeks have seen ministerial resignations from both the Edinburgh and London parliaments over the controversial plans by Blair to start work on a successor to the Trident nuclear missile submarines it seemed and appropriate time to post this. I find it bitterly humorous the way Blair pushes this through parliament – only with the help of Tory votes since so many of his own party refused to back it, my how proud he must be – to plan for a new force of nuclear missile submarines while at the same time attacking Iran and Korea for their attempts to build atomic weapons and after dragging us into an illegal war which was supposedly to destroy Saddam’s Weapons of Mass Destruction. Just who the hell are we supposed to ‘deter’ with this force? With British soldiers being injured or killed due to shortages of helicopters and personal armour shouldn’t we spend some money there instead of billions on new nukes which do nothing? Has anyone explained to the Prime Minister that the Cold War ended some time ago and the world situation is a bit different today?