Music of the (battle) stars

In the second season of the excellent new Battlestar Galactica there is a scene where Starbuck finds herself back on her homeworld, now occupied by the Cylons after much of it was devastated. After eluding the machine menace she finds her way back to the abandoned building where her apartment was before the war. Finding some batteries she powers up her stereo, puts in a disc and sits back for a few moment of pre-war style almost normalcy. The music she listens to is a piece I recognised from my own collection, part of the piano-based Metamorphoses by minimialist contemporary composer Phlip Glass.

Although I love this piece (hey, I have a copy myself) I remember being a bit annoyed at it cropping up here; this is supposed to be a human civilisation light years distant who have never had contact with Earth (or if they have it was so long ago it is now mythical) so playing a piece of contemporary music from our own culture broke the illusion for me for a moment. Later scenes also annoyed the hell out of me for the similar reasons – they proceed to use cars to move around occupied Caprica, including several recognisable ones such as a Humveee. Again, since this is an alien culture it bugged the hell out of me to see them used in the show in this casual manner – obviously it would be damned expensive to design fake alien cars for a few short scenes, but if you can’t then you should just avoid using the cars for those scenes rather than break the ‘reality’ of the show.

The messianic and religious themes also annoyed me a bit, but I’m prepared to take those as part of a mirroring of the strong religious currents in American society, especially in the aftermath of trauma. Small niggles though since I generally think the new BSG is bloody brilliant, down and dirty drama which doesn’t normally dish out easy answers and instead offers moral quagmires for the characters (oh and I totally want to snog Grace Park who plays Boomer). This last week I have been listening to the soundtrack for the second season of BSG and it made me realise why the Philip Glass piece had appeared; Bear McCreary’s soundtrack music, now that I hear it free of the actual show, clearly has been largely influenced by Glass’ work, with similar movements such as simple themes which repeat throughout with increasing variations. 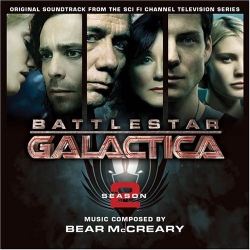 Its actually a pretty enjoyable soundtrack (especially if you already like Glass) and I realise now how much of it had passed me by during the actual show (but then the incidental music is meant to help the story along, not to be the main attraction), so it is nice to hear it properly; I especially love the use of the percussion in some of the battle scene pieces, reminiscent of Taiko drumming and just ever so slightly Crouching Tiger-esque.