It’s Festival time in Edinburgh; the city is absolutely jam-packed and indeed marmalade and a number of other preserves-jammed as well. A busy city all the year round for tourists it is incredibly busy over the summer months with visitors and language school camps from around Europe setting up on deserted summer campuses of the various universities. Then the Festival comes along – Book Fest, Film Fest, Fringe, the official Festival, the Jazz and Blues Festival – the entire city goes mad with so many tourists and Fringe luvvies in town even going to Piemaker at lunchtime takes three times as long. There are shows going on almost round the clock, hundreds of shows from street jugglers and singers to full-on opera, movie events from big names like Sigourney Weaver in conversation to the debut of a first-time movie maker from some part of the world you probably never even heard of, much less saw a film from before.

It can be a bit maddenign when you are working, simply trying to get around your normal day past huge crowds who seem to forget that there are some folk who actually are living and working in the city, that it isn’t (despite the appearance) a giant tartan theme park but a real place where people are trying to get on with things – even getting on the bus home can be a pain as crowds take up the entire pavement waiting to get into a Fringe show, oblivious to the fact they are blocking the way for rush hour commuters and even the bus trip home take longer because countless tourists keep stopping the bus to ask the driver if he goes to the Castle.

Luckily I am now off for two whole weeks (the first time I’ve taken 2 weeks off back to back since I started this job and its a nice, relaxing feeling to know I have two weeks of chilling and Festing to indulge in) and so I can just let it wash around me like a noisy, colourful surf. First booked Film Festival screening is for tomorrow night and, very nicely, the first one is also one Mel is going to with me, which makes it even better. Looking through my tickets I realised I will be going to each of the cinemas taking part in this year’s Film Festival, which is also a nice, if accidental, touch.

I’ve got documentaries, classic movies, foreign movies, British movies and more to watch, on top of using my pass to go and catch up with some more general releases I’ve not seen yet. And since the cinema I have the pass for takes part in the Film Festival I get the concession prices on all of them, which is even better. Anyway, I am about to head off to take in Fringe Sunday, where many performers set up in the Meadows to show their wares and entice people along; it is one of the few parts of the Festival which is really aimed at the actual people who live in Edinburgh and usually a wonderfully colourful day. Meantime here are some pictures of folks setting up for the madness that is the Fringe. 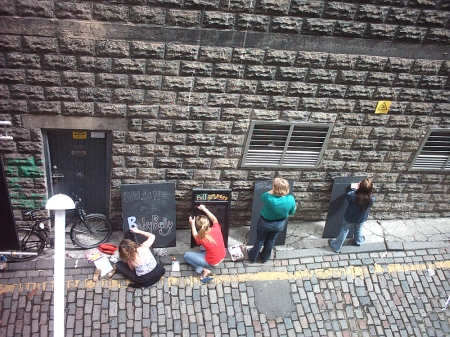 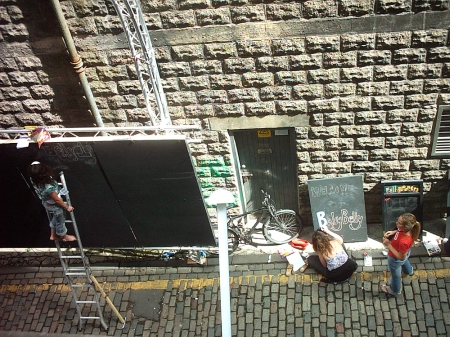 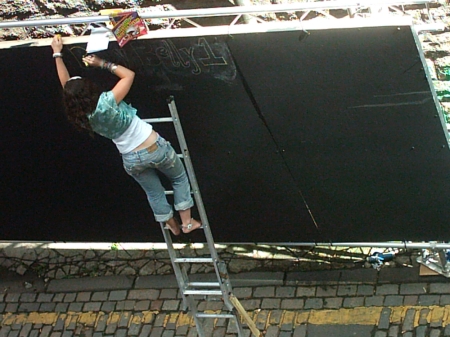 Of course, I am taking these pictures to show you the preparations going into setting up just one Fringe venue, the Smirnoff Baby Belly. And not just snapping a pic of a girl with an incredibly hot bum. No, sir. Really. Although she does have a very cute bum. Perhaps I could set up a Fringe show, the Bums of Edinburgh? Wouldn’t be any worse than some Fringe acts I’ve seen. 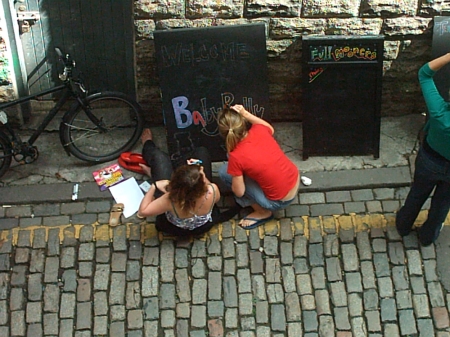 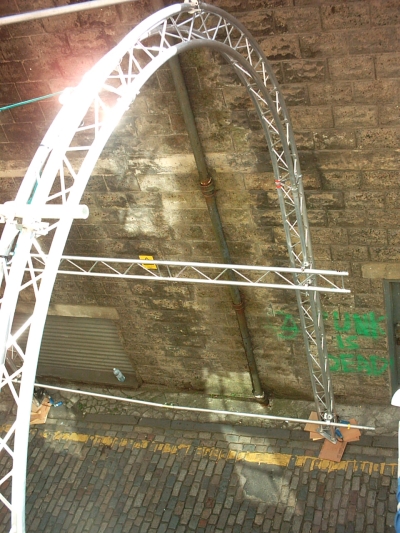 Up goes the entrance canopy frame and lights. 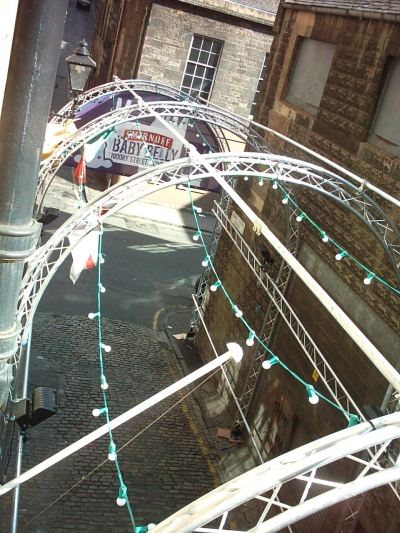 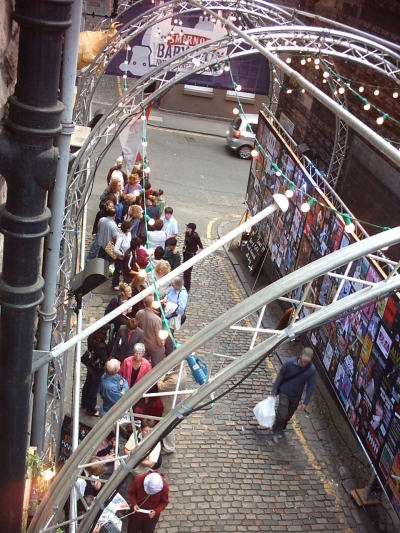 The lights are on, the showtimes chalked up on the boards and the fliers festoon the walls. It’s showtime!