Glen Mitchell has terrific piece on BBC Radio 4 covering the live tours of two of my all-time favourite performers, Laurel and Hardy. In our modern society fame has become a rather cheap commodity – some achieve it for great works and achievements but there seems to be a never-ending river – or perhaps sewer would be a better term – of interchangeable, disposable ‘celebrities’ who pick up some form of fame for the most pathetic of reasons.

However even those who achieve fame deservedly for a great piece of music for instance, just don’t come close to L&H at their height. Beatlemania doesn’t come close; so many people turned out to see the pair in Glasgow a stone ballustrade broke while their arrival in Ireland was greeted by church bells mimicking the sounds of their famous ‘Cuckoo’ theme tune, peels rolling out across as most of the population came to greet them off the ship. There’s a nice bit in Garth Ennis’ excellent Preacher series where the hard-drinkin’ Irish vampire Cass is talking about L&H to Jessie and recounts the same story, how the two of them were apparently in tears as they realised how much they meant to people. It must have been something else to have been a part of that crowd. 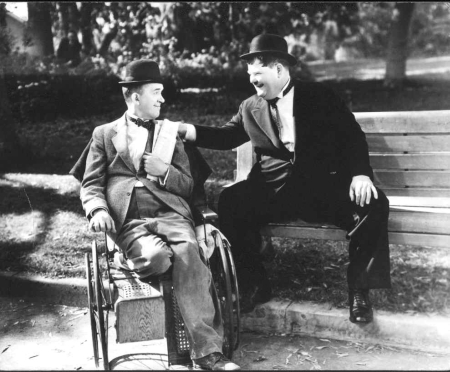 I loved L&H as a young kid watching repeats onTV during school holidays; I still love them and watch them on DVD today. The Cuckoo theme makes me smile right away while Stan still reduces me to tears of laughter with a few simple expressions. I loved watching Paul Merton’s recent BBC series on the early comedians of the silver screen recently and when the Filmhouse had their Buster Keaton season I was there, laughing away and quite delighted to see that a man my age had his young boys with him and they were also in hysterics. These performers just had something timeless; they are still loved and adored today, their craft still admired but mostly we just still like to laugh at their films. Oscars and BAFTAs for the heavyweight categories of Best Director, Best Actor and so on are so over-rated; now the people who can make films which make us laugh and laugh and laugh? That’s difficult and that’s worth ten times the most magnificent dramatic performance.