Busy, busy, busy as we celebrate British Comics Month at FPI; we’ve been making a big effort to add independent UK talent to a nice new British Small Press section – put several on this first week and more look set to come onboard, so it will be filling up. There’s not really a huge amount of money in this area, but we decided we wanted to give it a good push anyway and give some of the homegrown indy talent a chance; I’m already finding a hell of a lot more going on than I knew in the UK comics scene and I’m not exactly ignorant of graphic novels and comics. 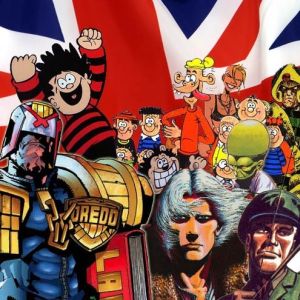 For instance I didn’t know Manchester had its own superhero in Queen of Diamonds, a superhero who just happens to be a raging great queen!Creating material for the blog each day to go along with the theme and contacting folks to talk about it is a heck of a lot of work. But then again, this week I got to talk to the man who edited the Beano. How bloody cool is that?