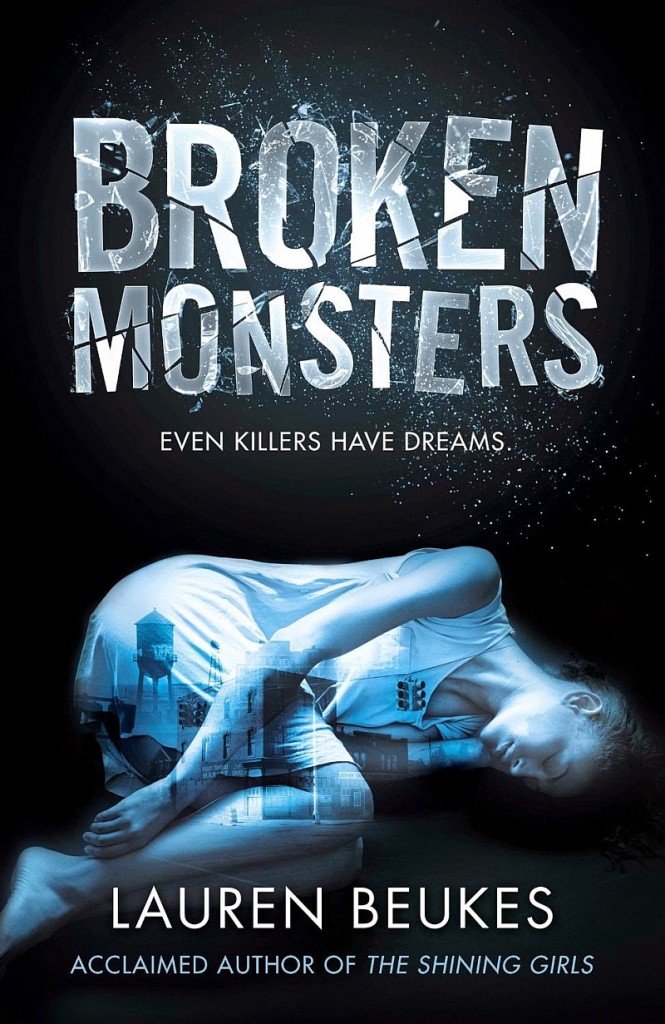 There’s a short version of this review which runs something along the lines of South African writer Lauren Beukes has been sent personally by the Dark Forces from the Infernal City to scar the mind’s inner eye with a scalpel of sharpened words. Although if Lauren is sent by demonic forces she’s very personable and has excellent taste in footwear. And besides, joking aside, from me saying a writer can scar your inner eye is a compliment. In Zoo City then more particularly with her last novel, the intensely brutal and powerful The Shining Girls (which made by 2013 best of the year list), she has displayed an uncanny knack for not just being able to conjure up images and scenes which stick in the reader’s mind long after finishing the book, they really get under your mental skin. In Broken Monsters she develops this skill to peel back the reader’s cognitive functions with a fine blade: the compelling main narrative flows over the cognitive components of the brain but the imagery leaks beneath the foundations of that logical faculty and seeps into the parts of our mind where imagination and it’s twin offspring Wonder and Terror live. This is a book which works as much on the logical strength of a powerful detective tale narrative but simultaneously works by engaging the darkest parts of our imagination; the combined effect is devastatingly powerful.

It seems pretty much everything in Broken Monsters is a struggle. The lead detective, Gabrielle Versado, has had to struggle against macho misconceptions about gender roles in the homicide department, as well as racial ones, while also struggling with a broken marriage and trying to be a single parent (her clever, determined but impulsive daughter Layla is also struggling, to come to terms with no longer being a happy family, with her mother often being dragged away by work pressures and the usual coming of age problems any teen in any city has). She and the entire department are in an eternal struggle, not just against crime in a city riddled with violent acts but with trying to bring order to a city that itself is struggling to hold together – Detroit. And then into this comes Clayton Broom, a man who has failed at relationships, at fatherhood, work and art, a man struggling to try and make sense of his life but lacking the ability to really understand and fit in. Until a car accident changes his perspective and he begins to start using his ‘art’ to reshape the world to how he thinks it should be. It’s not long after this that the first murder victim is found, his first attempt to bring his ‘message’ to the world and try and change it.

A body of a young boy.

Or, more accurately, half a body. The lower half is gone, replaced with those of a young deer, fused to the boy’s torso, then left posed to be found.

The scene is described in terms that really bring home the horror of this, not just of the deliberate, wanton taking of a life – a child’s life at that – but desecrating the corpse in this manner. Beukes captures the mindset of a group of big city detective battling to develop any possible clues into something they can work with, to take the monstrous but categorise it into areas of logical enquiry they can use, at emotional arms-length, to focus on the case and start working out why the killer did this, what it tells them, how they can use this to hunt him. Serial killer? Twisted trophy hunter fed up stalking animals, now turning to people? Is it race-driven? Sexual? Could it be some sort of ritualistic thing – a Satanic cult, Voodoo? You can almost hear the mental clicking of gears as the detectives take a situation that should never happen and try to apply their tried and tested methods on it to make sense of something that may be beyond sense, to categorise it, analyse it and follow those clues. But what if it is something else altogether?

What starts as a brutally compelling police-procedural story soon starts to morph – it will surprise no-one who has read Beuekes’ other books to learn that no single genre label can contain her work, and this is as much a horror story and a dark fantasy novel (reminding me sometimes of the dark horrors the likes of Tim Lebbon can conjure) as it is a detective story. When we see some of the events from Clayton’s increasingly disintegrating point of view we see that to him his horrific murders and bodily mutilations and alterations are not killing – they start as a sort of art, but not just art, this is primal art, art as a form of magic, as it was in the earliest days, when painting a deer on a cave wall was not just art but sympathetic magic, trying to capture something of the essence of that creature being depicted and to use it for understanding, shaping the world and power. The writing is deliciously dark – these are nightmares leaking out of the darkest places of a twisted, delusional mind of a man turned murderer, but as we are drawn deep into this heart of darkness it becomes increasingly difficult to tell nightmare fantasy from hard, cold reality in the semi ruined streets of Detroit. How much of this is the warped imagination of a sociopathic killer trying to somehow justify what he is doing to himself? And could it be real? What if others start to feel the awful, dark presence of what he is doing and how it can change the world around him and his ‘art’? It this shared delusions? Is there something else here? Psychotropics? Or something far worse, darker and unnatural…

(Lauren Beukes with artist Inaki Miranda at the 2013 Edinburgh International Book Festival, pic from my own Flickr)

I won’t delve any deeper into that, save to say Beukes manages to both have her cake and eat it in the very satisfying manner in which she explores the escalating situation and offers up different aspects for the readers to draw conclusions (and doubtless to argue with one another over aspects of what was what). Running through this main narrative thrust there are other elements – a sexual predator her daughter and friend bait with the aim of publicly shaming, her daughter’s friend in her seemingly perfect family but nursing her own dark secret, the burned out, failed journalist Jonno, come to the decaying city of Detroit and trying to reinvent himself as a new media guru, feeding off the increasingly bizarre murders. The scenes where Beuekes depicts various forms of new media and social media circling these events, exploiting them (and traditional media trying to feed off it like carrion) are bitingly realistic – the instant rush to judgement on comments online posted by people who don’t know what really happened but straight away have to shout loudly about their opinions (often in banal, badly spelled ways, frequently in vile, violent form) are sadly far too realistic. But those elements aren’t just added for a bit of detail or verisimilitude, oh no, Beukes is too good for that, she also starts weaving these new and social medias into the story in an unusual form that contributes to the main narrative, and how those changing media and technologies alter our view of the world around us, and our morality.

Even for an old hand at horror like me (happily raised in the pre-legislation era of the Video Nasties where you could watch anything) this is a deeply disturbing read. Somehow Beukes manages to craft not just the awful horrors of the brutal world big city detectives have to deal with on a daily basis (and she depicts the toll it takes on them) but then make this worse with an almost Lovecraftian atmosphere of some unspeakable, un-knowable, un-nameable horror that is leaking out from realms that should not exist except in our collective nightmares, bleeding into the real world on an artist’s palette that uses blood and body parts instead of oils and brushes. And it is utterly, utterly compelling while making parts of your brain twitch, you simply can’t pull away from it.