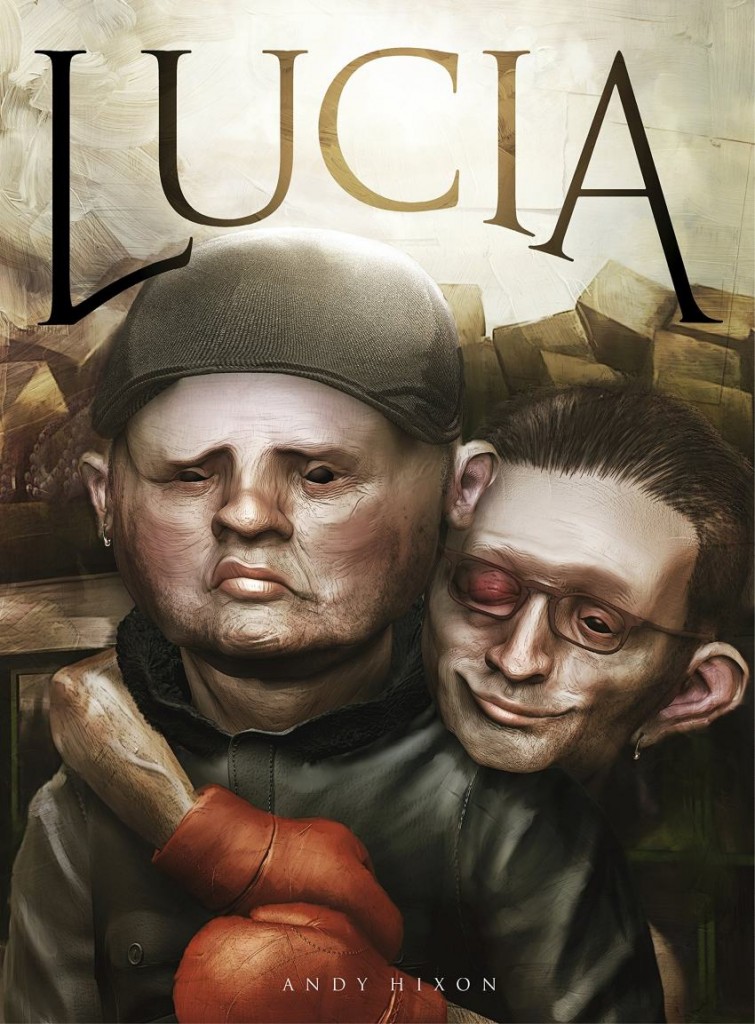 Andy Hixon first came onto my radar when he created the rather unique-looking artwork for Ravi Thornton’s Tale of Brin and Bent and Minno Marylebone tale, and his highly unusual artwork was a perfect match for that story which veered between seedy, grim realities and magical fantasy. Like the great Dave McKean Andy mixes drawn art with sculpted figures and model sets and montage work, creating imagery that, to me, looked like still from an animated film, something the Brothers Quay or Jan Svankmajer might create, with that quite intoxicating, contrasting feeling of very down at heels, grim reality against a sense of the more fantastical, hope mixed with the grotesque, creating a similar feeling perhaps to that in the best League of Gentlemen episodes. 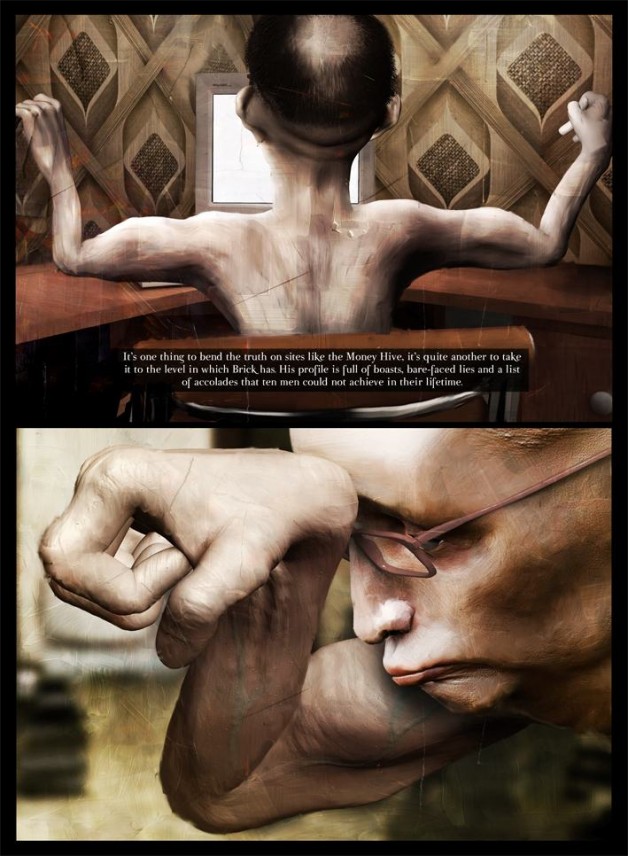 In this, his solo full-length work, this artistic approach serves him well, suiting the story perfectly. We follow two main characters, Brick and Morty, a pair of broken, damaged characters adrift in the uncaring, crumbling society of today, living on the edge. Literally on the edge and crumbling – their derelict seaside town, Lucia, is slowly dissolving into the waves, the only house Morty and Brick can afford is right on the cliff edge, next in line to vanish as the cliffs crumble into the sea.

On both the physical and the societal scale, these men are on the edge and that edge is eroding out from under them daily, with nowhere else to go. Morty is a wheelchair-bound man who has seen better days, a wife, dreams of a decent life together, of a career as a respected writer, Brick lives in a delusional state, convinced he will, if he keeps training, become the Ultimate Fighting Welterweight champion of the world. Despite being a tiny, skinny wee bloke who’s not terribly smart. His profile on his website and his dating platform are full of totally imaginary conquests of Herculean effort; while Morty dreams of a return to better times poor Brick seems to really believe his own fabrications and delusions. 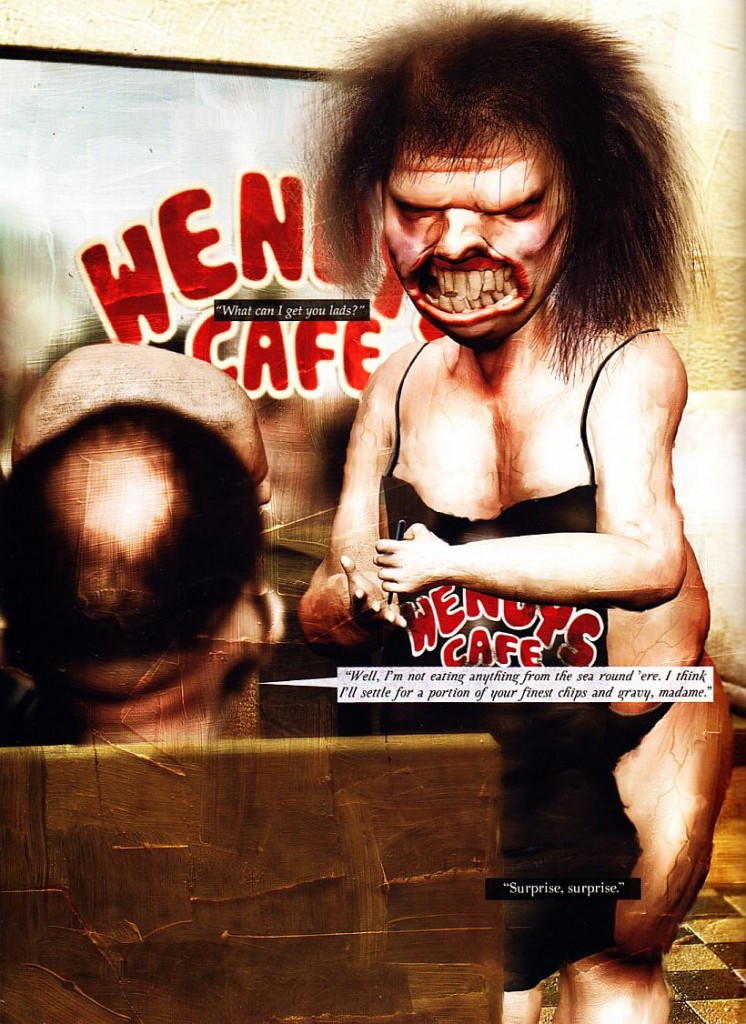 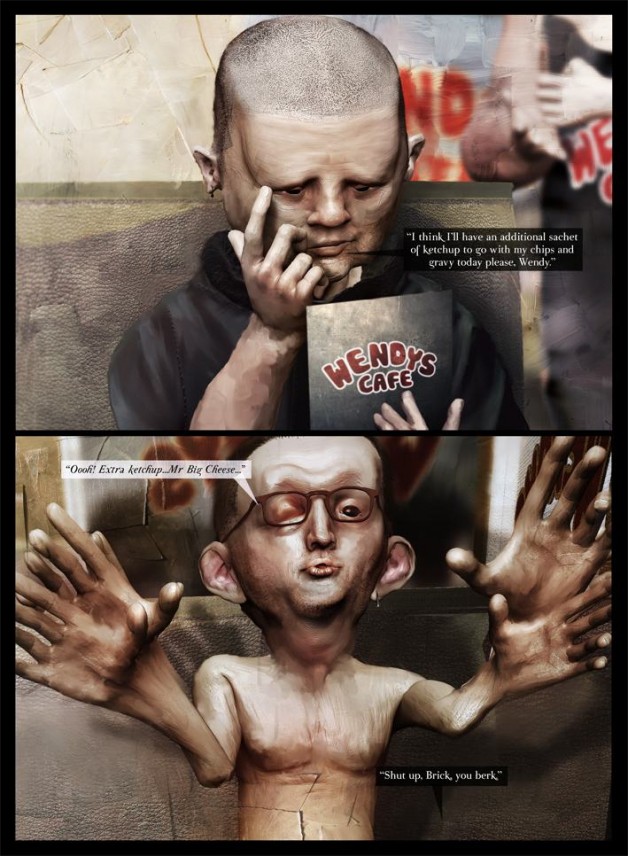 But when you look around Lucia you can easily see why Brick chooses to hide in his made-up world where he can be this physically impressive champion; Lucia is a dreadful place, a sort of purgatory almost, where damaged souls wait without hope. Perhaps like Walter Mitty or Don Quixote before him, Brick needs those delusions – hell, we all need little daydreams sometimes to make the harder parts of life more bearable. But with such a bleak environment, so grim, so hopeless, you can’t blame the little guy for believing in his dream, that if he keeps going he will be what he imagines himself to be, even though he never, ever will be. And like Quixote before him the reader comes to love him, not in spite of his delusions, but because of them, and to not want them to be broken, because to expose him to cold reality, even if it could be done (he is pretty far gone into his own world), it would break him. His own form of dreaming madness keeps him together in this awful world.

No such escape for Morty though, his body broken but his mind still sharp, able to contemplate their situation as they pass boarded up shops on the seafront, like many old seaside towns once a hub of family holidays, nowadays derelict and empty save for the “gold for cash” pawn shops, the bookies and the employment exchange (which in a very symbolic scene is actually in a street already swallowed by the sea, but being a tall office block they just moved the offices up to the floors above the tide mark, meaning you have to row over on a boat to claim your job seeker’s allowance – and naturally if you can’t get to this awkward place you are cut from your benefits). 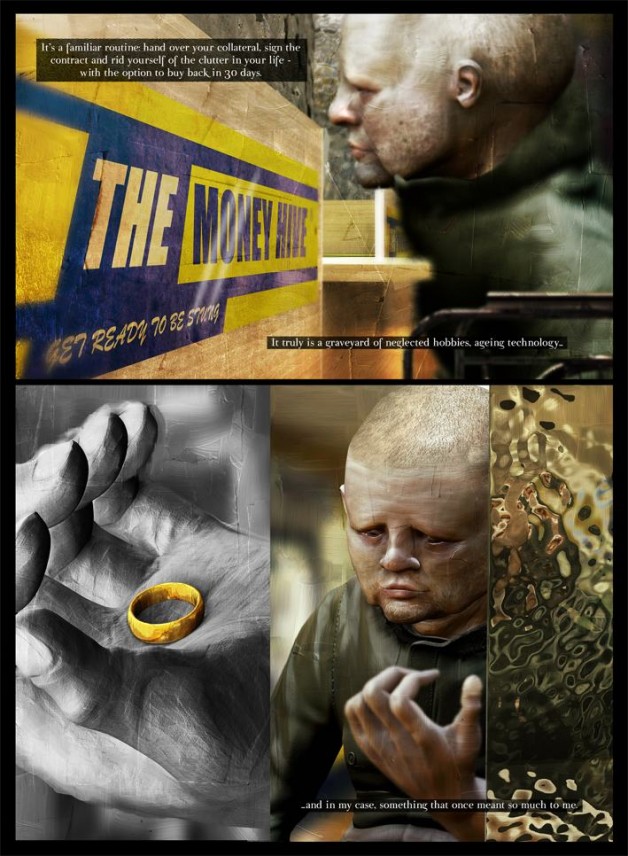 But I don’t want to give the impression this is one, long gloomy trip. True, both Lucia and its inhabitants of strange, twisted grotesques evoke a sense of abandonment, of the inevitable crumbling of society, alluding to the state of post financial crash and Coalition-government Britain of bedroom tax on the disabled and entire swathes of the most vulnerable failed or outright abandoned by the older social nets that were there to help them back on their feet. And sadness does permeate – a scene of Morty outside the pawn shop, contemplating his golden wedding ring, all he has left of his previous life, is heartbreaking, all the more so because we know real people are making similar choices in the legions of these businesses up and down every town in the country.

And yet this is not a gloom-fest. I likened the look and feel to the League of Gentlemen earlier, and just like that wonderfully bizarre show this can go from pathos or plain disturbing to incredibly funny (even if it is dark and often grotesque humour). One scene in the cafe sees the bizarre owner described thusly “Wendy looks like a retired dinner lady, who regularly holidays in a timeshare in Chernobyl.”Cruel but also funny and even the cruel nature of the phrase is leavened by more text which again shows empathy for these poor, lost, bizarre characters. And despite the grim situation there’s warmth and love in the relationship of Brick and Morty, Brick supposedly Morty’s carer (and he does help him with his disability to be fair), but often it is Morty looking out for his delusional little chum. Two damaged souls, rejected from the “aspirational” society, living precariously on the edge of a fading town that is itself living on the edge of a damaged country. 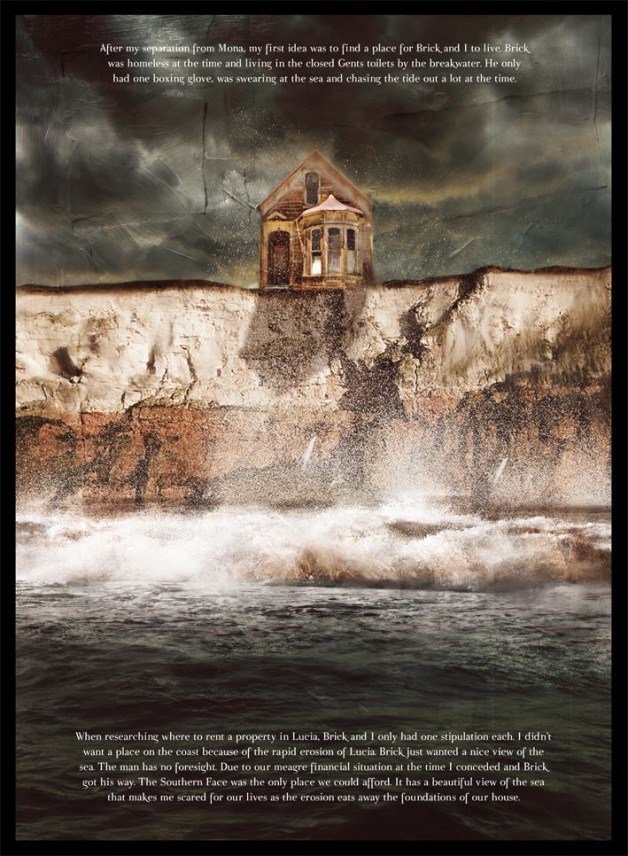 And yet they work well together; together, despite all the odds, they get by (just) and there is something heart-warming in the way they look after one another in this dark world. And while he fashions grotesque versions of human beings, Andy also imbues them, especially Brick and Morty, with a lot of emotion, a lot of humanity in those- odd, disturbing, misshapen faces and bodies; it’s wonderful how his art wrings such emotion from the characters and so much empathy from the readers. It’s dark, disturbing, a black parallel of the failed parts of our own society, of towns where the only shops still thriving are pawnshops and the people are downtrodden and yet somehow not quite broken. Damaged, yes, but not entirely broken, still holding on in any way they can, and the strange friendship of Brick and Morty is their way through this crushing world. Both grotesque and yet beautiful, grim but funny, Lucia is utterly engrossing and Andy is a creator to watch out for.

You can read a guest Director’s Commentary post by Andy talking about Lucia here on the FP blog. This review was originally penned for the FP blog