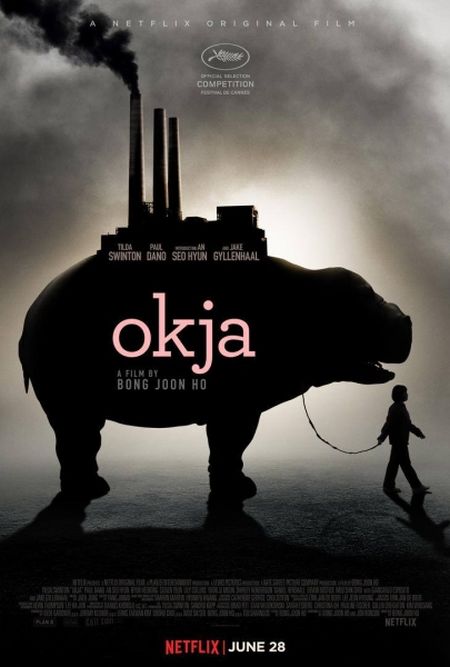 Bong Joon Ho brought us the brilliant monster movie with a twist, The Host and the film adaptation of the Snowpiercer graphic novels, so when I saw his latest film, Okja, was due to make its bow at the Edinburgh International Film Festival, I had to grab myself a ticket. A Korean film in both Korean and English – and boasting a nice bonus in the form of the great Tilda Swinton – Okja sees a huge multinational attempting to rebrand itself away from its toxic image, with new CEO (Swinton) waging a PR blitz to try and make the company look warm, eco-friendly and fuzzy after the reign of her father (who even his own family admitted was psychopathic). And the main plank is the superpig, which, over the next ten years, as well as being studied by their own scientists, will be given to traditional farmers in different parts of the world to raise for ten years.

Following the slick (and sickeningly obviously fake) PR launch (riffing nicely not just on how heartless corporations try to hide their agendas with a feel-good PR blanket but also the way so many super-rich CEO seem to desperately want the public to love them), we move to the mountains of Korea and meet Seo-Hyun Ahn’s Mija, who loves with her grandfather and Okja, their now fully adult superpig. Okja is less farm animal and more family member/pet (let’s be honest, to most of us pets are family members), and we get to see Mija walking with him through the woods, playing with him, tapping the sleeping giant animal so he rolls over on his back and she can sleep on his tummy. It’s all quite adorable and I take my hat off to the very young Seo-Hyun Ahn for being able to give such a convincing and emotional acting job to a CG creation she couldn’t see when the film was shooting, it’s a terrific job for such a young actress, and it isn’t long before the audience totally buys into their relationship.

But the day is coming when the corporation wants to pick up Okja and take him back to their American facility, hold their even bigger publicity show and then… Well, gigantic or not, what usually happens to farmed pigs sooner or later? Mija is heartbroken at Okja being taken away from their hillside farm, this is her best friend in the world, and the animal is so clearly bonded with her too. She decides to set off to Seoul after Okja, in what could, in other hands, have become a clumsy Disney-esque “incredible journey” type tale, but fortunately never does. Enter some comedic light relief in the form of some animal liberation activists, apologising to everyone for any harm as they try to free Okja. They have a longer term plan though, and Okja and Mija become a part of it – and of course the corporation too has plans to use both superpig and adorable young girl for their own ends, and the pair are caught between them. 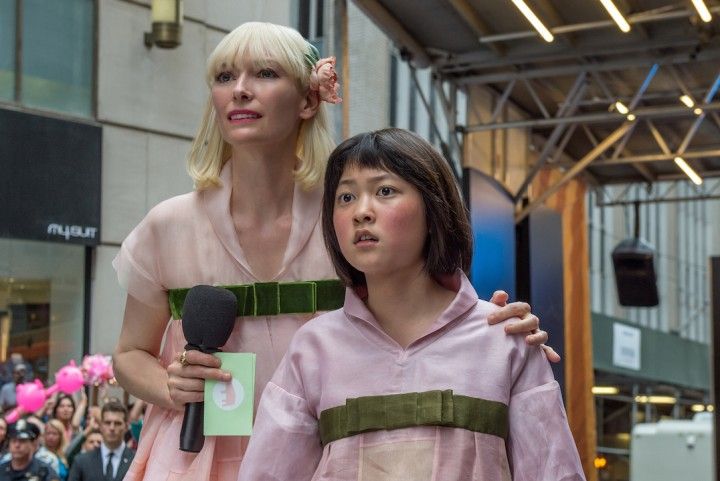 This was such an utter delight – adorable and emotional in places, often wonderfully funny in others, and with some deliciously satirical barbs, especially for giant corporations, the spin doctors who spend vast sums trying to persuade the public how nice they are (really, we are not evil, honest!), and most especially on the way humans treat animals, especially food animals. I don’t think the film is trying to persuade anyone to become a vegetarian (although some scenes made me glad that I am), but certainly to think about the mass-production of animals for food and the appalling way thousands of animals are treated every day so we can buy cheap food from the supermarket and not bother our consciences by thinking of what sort of life the animal that ended up on our plate had before its demise. 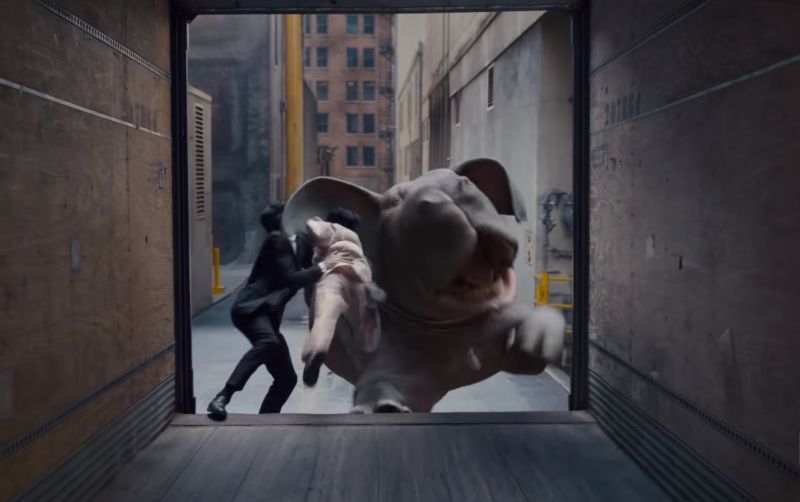 The story moves from sweetly emotional to gleefully satirical, with swipes at Almighty Power and healthy doses of our old friend The Absurd, saving perhaps for a later scene where we see what is to happen to the animals, which is just horrifying. The CG for Okja is terrific, the animated animal coming across much more like a giant, good-natured Labrador than pig, and young Seo-Hyun Ahn’s acting with this creature added in post-production totally sells the relationship and is the heart of the film, while Tilda Swinton’s increasingly deranged CEO steals scenes left, right and centre. This is an absolute gem.