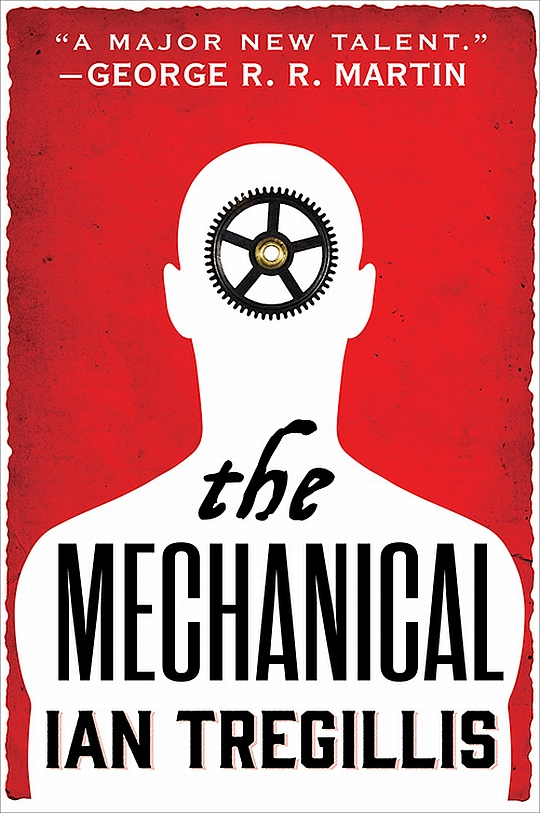 Ian Tregillis first came to my attention when Orbit published his Milkweed series, starting with Bitter Seed, a fascinating and very well constructed trilogy – or perhaps triptych is a better term, as the books aren’t just sequential but curve back on one another – of an alternate history of World War Two, of an even more bitter struggle for national survival by the UK, mad Nazi scientists, scientifically-created supermen with dangerous abilities and an intriguing magic/science underlying it. It was dark, often bleak, relentless and utterly compelling and addictive. So when The Mechanical arrived on my desk – with its very cool minimalist graphic cover and page edges matching the red of the cover colour, very swish – I was eager to see what he was going to do with the start of a new series. Well, you know how I said his previous trilogy was “compelling and addictive” a moment ago? The Mechanical is that too and even more so. This is the kind of novel you’re reading on the bus or train and you actually resent reaching your destination because it means you have to pause your reading.

There are some common elements this new novel – the first in the Alchemy Wars series – has in common with Tregillis’ previous Milkweed trilogy. Both series feature Tregillis’ own take on one of my favourite forms of science fiction, the alt-history tale, a subgenre which, if handled cleverly – as it is here – can fascinate the reader with “what if?” moments where the fictional history diverge from our own around some turning point which came out a little differently. The second thing it has in common with his previous book is in world-building. And if there is something we geeks really love in our science fiction, it’s some seriously good world-building, the sort which has lovely details we can absorb and well-worked out variances from the actual history, with good supporting reasons as to why this world has developed as it has and how those changes from our history affect everything else rippling forward. And here it is handled brilliantly – Tregillis crafts an alternate history for the world that is as intricate as the clockwork mechanicals – the Clakkers – who feature in the story, fine details adding to the feeling of authenticity of this fictional world. For instance steam power is hardly known – who needs steam locomotives or steamships when you can have them powered by rows of mechanicals? And little, knowing details like Delft being famous not for the lovely Delft ware, but for their antique decorated masks for earlier, vintage models of Clakkers, or, being the Netherlands, there are rumours of an “underground canal” rather than an “underground railroad”.

Of course no matter how wonderfully though-out the world-building and the clever reasons for the alternate versions of history, these are just the stage-dressing; it’s the narrative and the characters that make a novel really work, and I’m glad to report that Tregillis handles this as skilfully as he does his background detail. This is one of those eminently satisfying novels where, by the time you get halfway through it, you will be very emotionally invested in the characters, both human and mechanical. We open with a gathering in the Hague – humans and Clakkers coming together to witness something now fairly rare, a public execution. On the scaffold today, some “papist” French spies trying to undermine the fine, upstanding Protestant Dutch. This isn’t the 17th or 18th century though but the 20th. The religious wars are still ongoing, but in this world the Dutch married the maritime and trading expertise to the creation of their mechanical men – general servitors, specialised units like soldier mechanicals, the dreaded multi-legged Stemwinders (which do the bidding of the Horologist’s guild, which after several centuries is not just a powerful guild but also operates elements akin to a secret police/intelligence unit) or maritime or airship mechanicals. The result is that rather than the British creating their vast empire, it was the Dutch who rose to global domination, aided by their almost unstoppable Clakkers, designed to obey instantly, to work tirelessly. They are still at war with France, but this is New France – what would be Canada in our world – because the Continent belongs to the implacable Dutch and the Brasswork Throne. What’s left of the French kingdom and crown is buried in Marseilles-in-the-West, surrounded by Dutch forces from New Holland, based out of New Amsterdam (obviously with no British empire New York remained Dutch and with no British colonists it was the Dutch and French contesting for North America), where Berenice – known as the Talleyrand (a sobriquet for whoever holds the position of the French spymaster) – is being humiliated in the king’s council because the French about to swing from the gallows in the Hague are the main part of her network in the Netherlands, now blown (it’s almost like something from Tudor times, with Walsingham’s spymaster rounding up Catholic spies).

And there is something else, which has brought out the crowds but also large number of the mechanicals in the Hague – a rogue Clakker is to be executed. A machine which has done the seemingly unthinkable and developed free will, able to simply say no to a human command, to ignore the compelling geas upon geas layered on their systems to make them obey, punishing them with a deep, searing pain inside their mechanical souls if they do not obey right away. Many of the city’s Clakkers are lingering, despite the pain of the command geas pushing them to go about their duties, to witness this, as the Horologists plan to burn away the machine’s hard-won sense of individuality in their glowing forge. These machines are born from both clockwork mechanics and science as well as a rich infusion of alchemy (legend has it the great Huygens purloined some of Newton’s secret alchemical notebooks which, along with his own genius, kickstarted this era). Actually it’s not fair to say this doomed rogue – an extremely rare creature the Horologists take huge pains to prevent happening again – has developed individuality.

As the book progresses and we follow the Clakker servitor Jax and see his interactions with other mechanicals (they click and twang their pulleys and gears to talk secretly to each other, their humans totally unaware), it becomes clear these mechanical creatures are indeed self-aware, but the geasa the Horologists layer on their awareness at creation, like subroutines in a computer programme, bind them, almost the way a magician is said to bind spirits or demons of familiars, to compel them to do what is commanded, aware but unable to refuse. It’s a particular vile form of one of humanity’s scourges, slavery, except this bondage doesn’t just hold the body in thrall but the very being is held in perpetual service. “Clockmakers lie” is the regular secret greeting between the Clakkers, and they dream of emulating the rogue – how did he escape his bonds? Could they do the same? If they did, what would they do, where could they go? Escape to New France and beyond into the north where their own secret legends tell of a place where they can be free? Or is that just comforting folklore for the mechanicals? Circumstances will soon push Jax to find out the answers to these questions rather urgently…

This is an increasingly fascinating book, becoming every more so the deeper you dive into it. The main narrative arcs of Berenice and Jax are well-paced and absorbing, while the superb detailing and world-building I mentioned before flesh this world out into one you can believe in and feel you could explore. Those elements alone would promise you a superb read, but there’s more in here, for those who want to think further, from the more obvious themes revolving around the morality of holding someone – machine or human – in bondage, Tregillis capturing with quiet, emotional intensity the pain of those so enthralled, imprisoned both physically and spiritually, aware but never in control of their own bodies, and the associated philosophical questions of free will – is there really such a thing, or is it only an illusion? There are elements of Frankenstein in here – the creation of new forms of life then not treating them with the respect they should have had, humans dabbling into areas where perhaps only the gods should – and questions of the nature of freedom and the nature of being which will have you thinking long after you finish reading. As with his Milkweed series you cannot take the safety of even lead characters for granted, Tregillis is not afraid to make his characters suffer, some of them quite terribly. All of which makes this one of the sharpest, most intelligent, hugely compelling works I’ve read this year, and I cannot wake to see where Tregillis takes this series next.