The Curios of the Paper Moon, 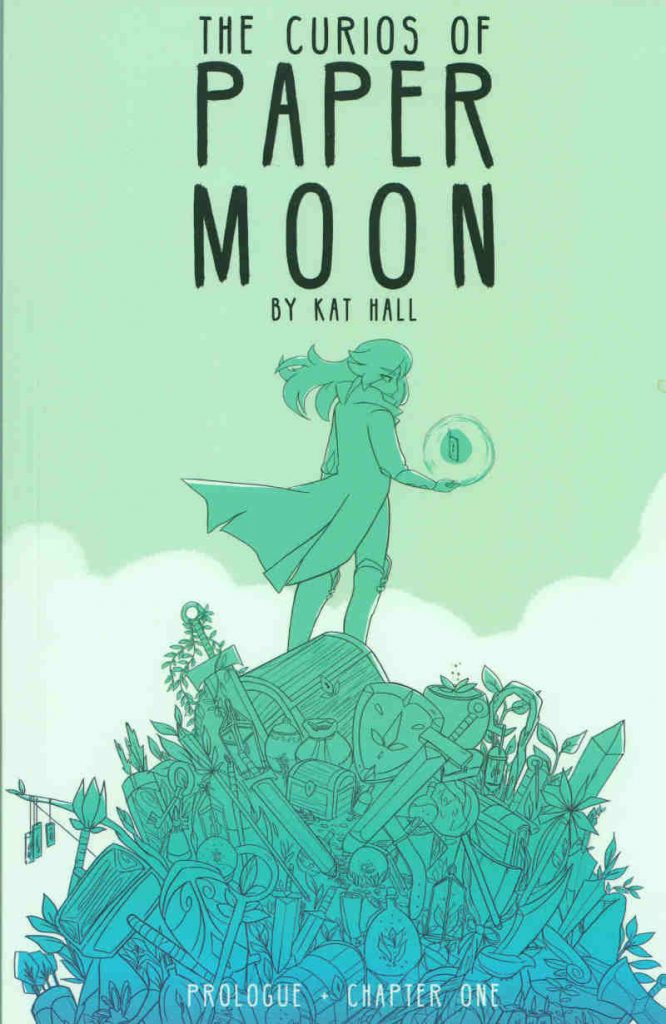 Kat Hall’s charming fantasy The Curios of Paper Moon is available as a regularly updated webcomic, but I must confess I hadn’t come across it (more interesting webcomics out there than there is time to browse them all!), before chatting to her at the recent Edinburgh Comic Art Festival. While we were nattering at her stall I was having a browse of a collected print edition of the series, and my initial impression made me want to buy it right away, which is usually a good sign.

Having had a wee chance to sit down and read it now, I am once more glad I listened to my instincts and picked it up, as this was just a lovely, lovely read, the sort of one that charmed me and left me smiling. The print version includes both the Prologue, which sets up the basics of what you need to know about Kat’s fantasy world of Little Garden, and the first chapter of the webcomic, which delivers a decent, self-contained story, the pair of them combining to give you a tale which you can take on its own, but more likely will leave you interested in reading more. 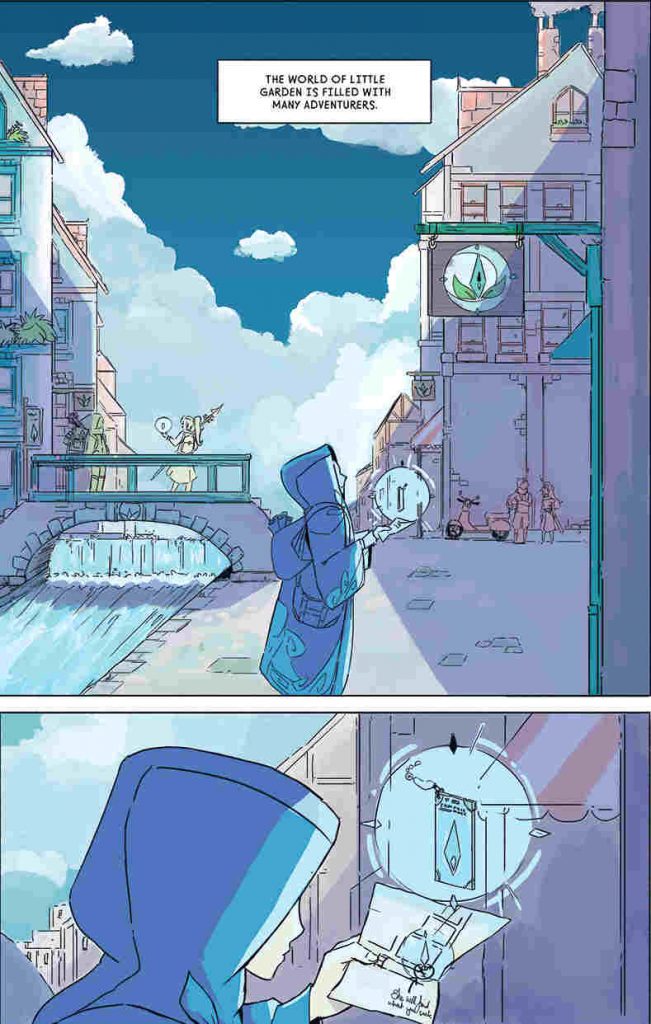 In this world there are treasures, monsters and dungeons, and treasure hunters like Clair who enjoy questing for them – for financial gain, either on behalf of a client, or to claim the treasure for their own. Clair, who between adventures has her own small store, also has a bit of an advantage on these quests as in addition to her formidable treasure hunter knowledge and skills she is also a witch. When she comes across the diminutive form of young Marina, the young woman persuades her to help find her friend, Barrett who unwisely ventured into a dungeon himself, seeking a special treasure. Clair isn’t indifferent, but she’s no charity case either, and agrees to help, for a fee.

I’m not going into too much detail on the quest here, because it would be a shame to spoil it for you. Suffice to say there are some elements you’d expect – and indeed, want – in a dungeon quest: the experienced, confident leader, the younger sidekick who has to learn fast (but is better than they think), surprises and twists, some very lovely tea cups (well, even a dungeon questor need to sit down and have a cuppa now and then). And, oh boy, some fabulous dungeon locations – not just the dark, dank caverns under the earth, but terrific fantasy architecture, bridges over chasms, Kat embraces the fantasy element to let her visual imagination indulge itself, and why the heck not? I mean if you can’t indulge yourself with wonderful visuals in a fantasy tale, where can you?? And that also includes some cracking fantasy creatures to encounter (yes, including dragons, I mean come on, you can’t have a proper dungeon quest and no dragon, can you? Just not the done thing!). 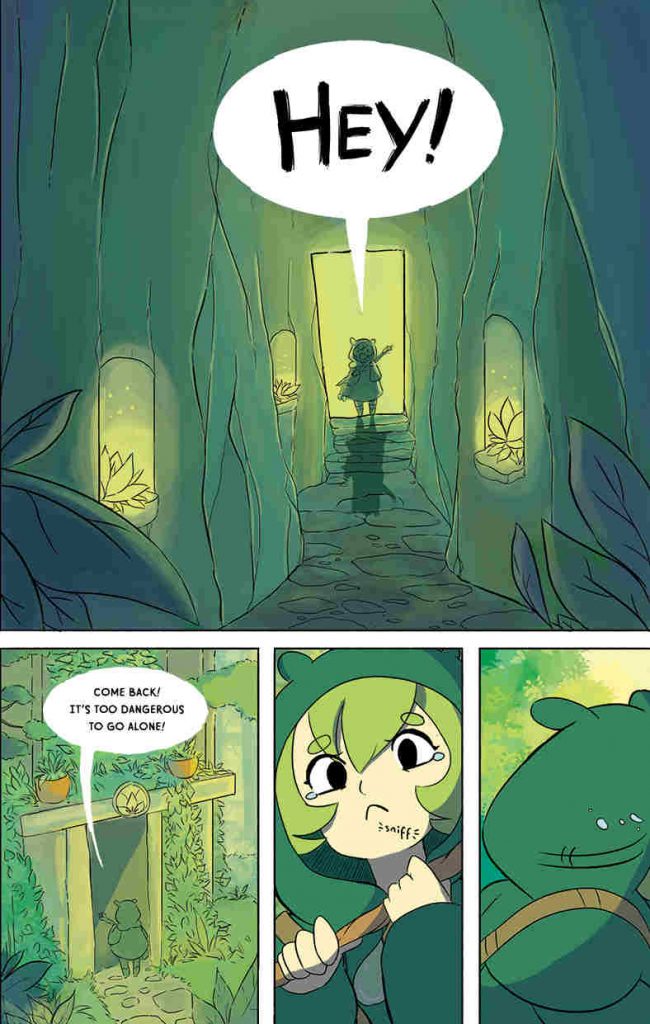 You can follow Curios of Paper Moon online as a webcomic, but it’s far more satisfying to have the print version, so I’d highly recommend picking it up (it also means you give some money to the creator, which is always a good thing). It’s utterly charming and delightful, the art manga-tinged but not too much, and nicely coloured (giving depth and feel to the fantasy world without going over the top), with some lovely visuals, and a story which functions as a good, standalone tale but also as an introduction to this world and characters, hints at paths to follow further and histories as yet undiscovered, and a nice little bit of world-building (including nice touches like what look like magical talismans but which on closer inspection also seem to be a sort of phone and social media device too). Still smiling just thinking about this comics… 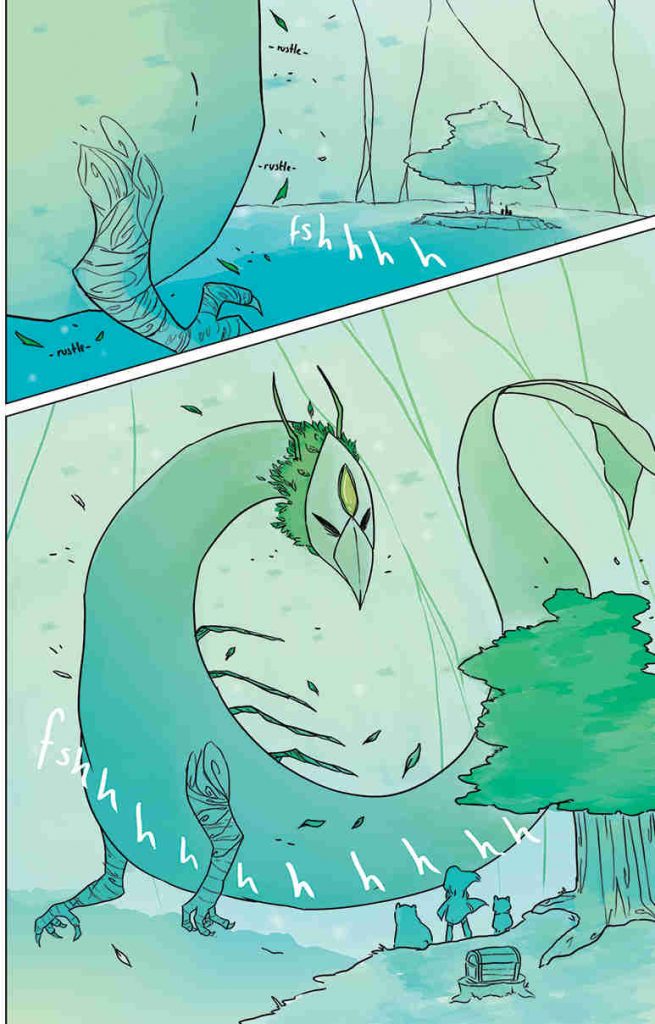