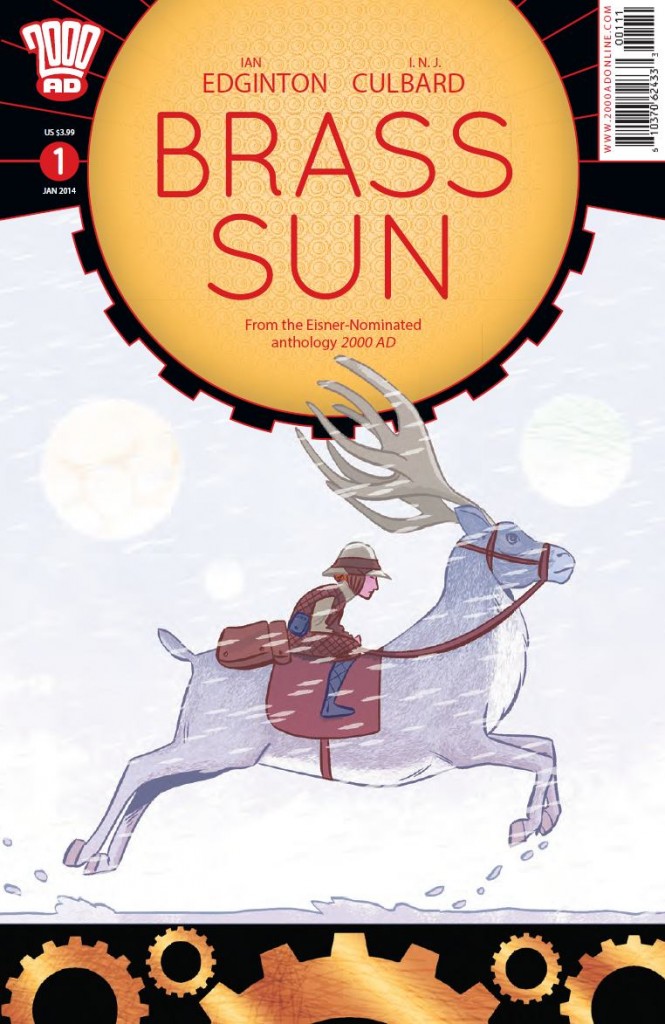 Regular readers will no doubt have heard several of us on here mention Brass Sun, a wonderful science fiction series created by Ian Edginton and Ian Culbard for the mighty 2000 AD. Have you ever, as an adult or a child, been entranced by the simple beauty and wonder of an old clockwork orrery? A seemingly perfect little moving model of the solar system, all the worlds and moons orbiting around the sun, driven by clockwork, representing each world’s distance from the mother sun and length of rotation and orbit relative to its fellows, an intricately fashioned device. Our understanding of celestial orbits and dynamics has increased enormously since those models were first fashionable and we know the universe to be far more complex than we ever dreamed of when first the craftsmen took Newton and Keppler’s laws and applied them so lovingly to these brass representations of the heavens.

And yet the orrery remains such a beautiful piece of work, conjuring dreams of wonder, a marriage of the craftsman’s art, as precise as a hand-built clock, with scientific learning; engineering and art and imagination all in one lovely device, for some a demonstration of what Sagan called “the magnificent machinery of nature”, for other’s proof of a benign deity, a magical clockmaker in the heavens. Now imagine there were real worlds, little realms actually on such an orrery, all living on their little realms rotating around that central sun on their brass wheels. A “wheel of worlds” set by a blind watchmaker… That’s the set up for Brass Sun, which several of us on the blog have been loving in the weekly 2000 AD, but now as part of the ongoing expansion of 2000 AD series (especially to the North American markets) the series (so far, it is still ongoing in the weekly Prog) is being collected into US-style comics of 32 pages, starting late in May, a perfect way to get into it if you missed it in 2000 AD. 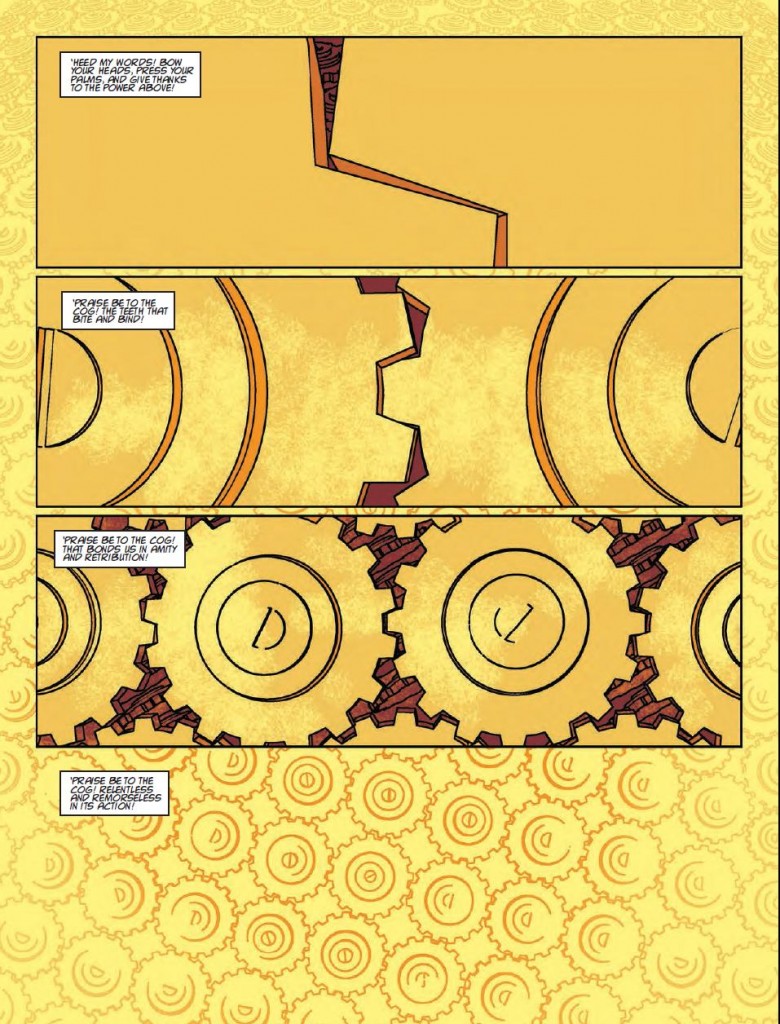 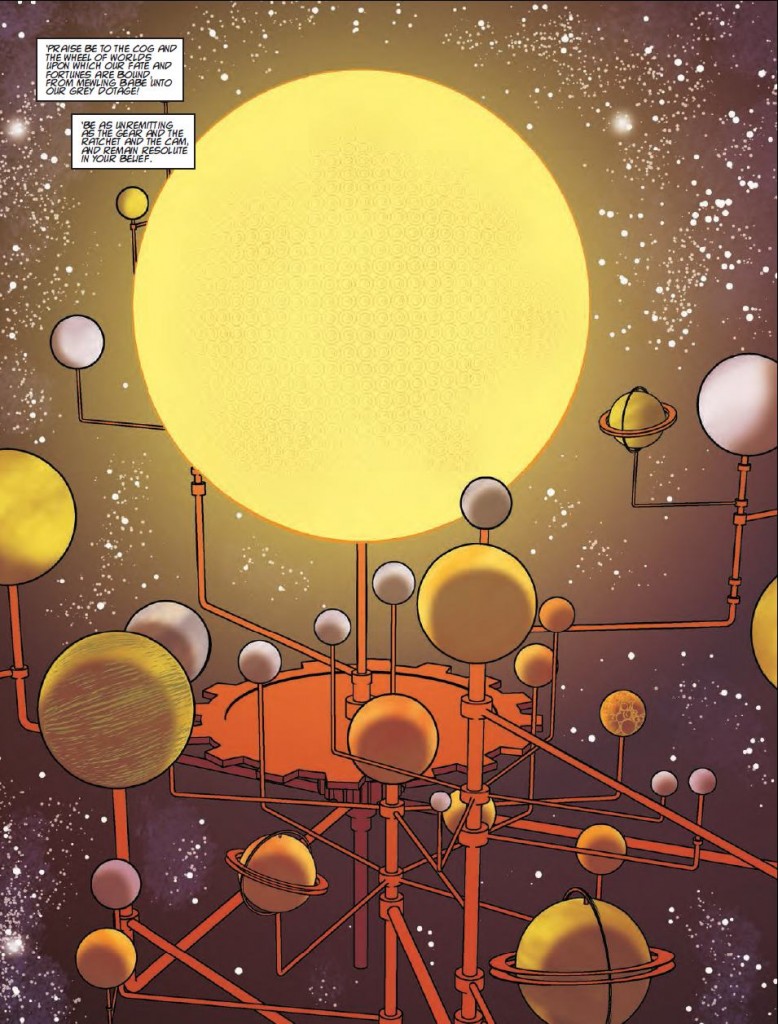 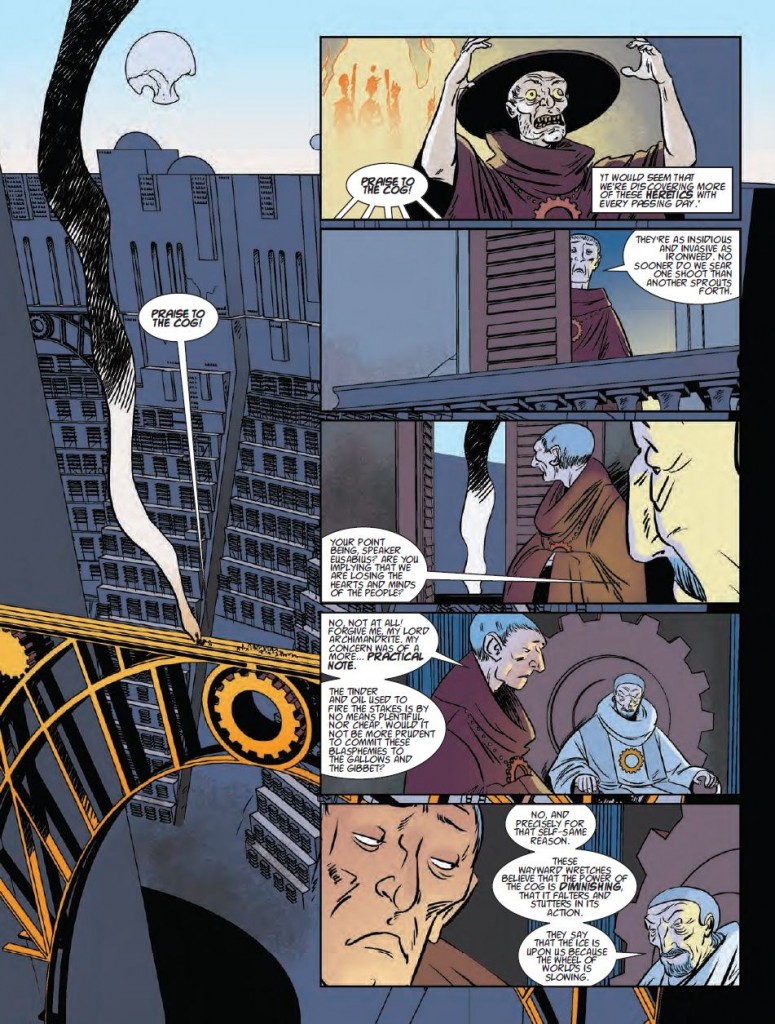 Frankly I have to say the Ians had me at that simple but beautiful and wondrous concept alone. And oh, it is beautiful, achingly beautiful – Culbard does wonderful close-up character scenes but he’s also a master of the magnificent splash page, and our first glimpses of this clockwork solar system is a glorious piece of comics art, tapping into that most precious of sensations that science fiction – in both graphic and prose form – does pretty much better than any other genre in literature: the sheer sense of wonder.

But wonder alone isn’t enough – a story requires narrative drive, it requires characters, and we’re in the hands of two of the UK’s very best here. We meet young Wren and her grandfather – he has been committing a dangerous heresy in a very religious and orthodox world, studying the skies with his telescope. He knows he will be noticed and reported, that the guards will come for him, that he will face burning at the stake for his heresy. But he has gained knowledge from old papers, secret papers, and with his scientific study of the sky applied to this he knows that the seemingly relentless icy winter which is pushing into their world, killing all before it, is no accident but a sign of something wrong in the very system of their wheel of worlds. He equips his grand-daughter Wren, entrusting her with information and a ‘quaycard’ and sends her off, knowing that he himself will be dragged before the religious authorities. Indeed we now find out he was once a bishop himself but what he learned turned him from orthodoxy. Now beaten and in chains he argues with the religious leader:

“I was like you – I did as the Cog commanded – but the ice still came. Our people freeze and starve by the million. Prayers and persecution cannot hold the inevitable at bay. There must be another way.”

“Faith! Faith is the only way!” 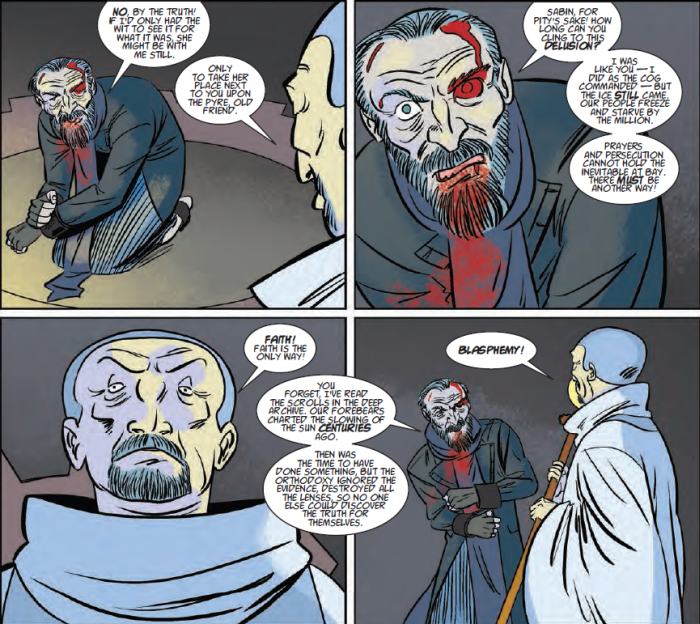 It’s not hard to see these scenes alluding to the persecution by the church of early astronomer’s for daring to suggest that their observations and calculations showed the progression of the heavens to be different from what the religious authorities of the day said, threatened with torture and worse for daring to speak what we now know is commonsense truth. And it’s not a major leap to see these scenes also as a commentary on some zealots today who refuse to acknowledge rational debate and scientific evidence (think on demands to give creatonism space on a school curriculum alongside evolution). But the world doesn’t care what blinkers people put on and what fables they tell themselves are true, it will do with it will, and in this case it seems the wheels have been slowing for centuries, but religious dogma has chosen to ignore this. Now Wren is sent away from her doomed grandfather, beyond her own world and into the spaces beyond armed with his journals. He hopes she can escape, but more than that, perhaps she may be able to do something to help the people of her world, of the other worlds… 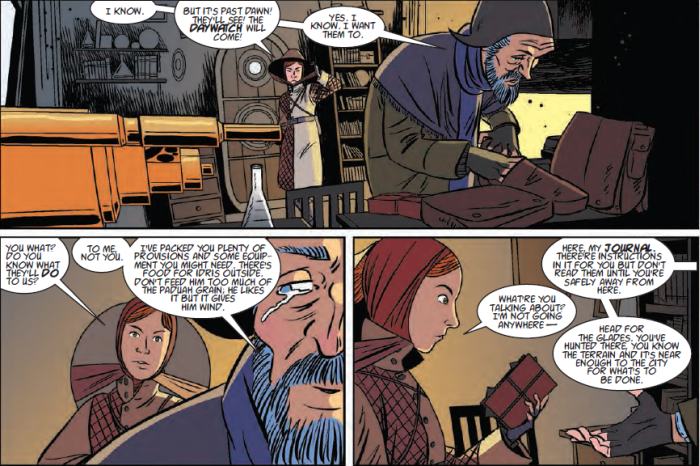 And so we get a wonderful melding of different story types, the science fiction with a hint of Steampunk for the clockwork solar system, the medieval religious mind meeting the early scientific thinking and then the classic young but determined hero (or heroine) being forced onto a dangerous quest. All of this is set up within this first issue, a terrific bit of storytelling from both writer and artist – introducing such a lovely concept for a world (or series of worlds), characters and quest, all within 30 odd pages, but then again as both are used to working with four of five pages in a weekly Brit anthology comics format those are skills in economy of storytelling you have to hone to work well in that format.

I was totally taken with the first runs of Brass Sun in the weekly 2000 AD and am delighted to see it being offered in this new format so more readers get a chance to experience it (same US comic book format as was used for the recent, highly successful Dredd movie sequel tale), and it is also a great way to wave the flag to a wider reading audience for some of the fine works that still come out of the House of Tharg and from our top Brit comics creators. A gorgeous, intoxicating story, beautifully illustrated and carrying us on a tide of wonder. Brass Sun #1 is published late May and is available to pre-order on our comics subscription site.

This pen was originally penned for the Forbidden Planet blog