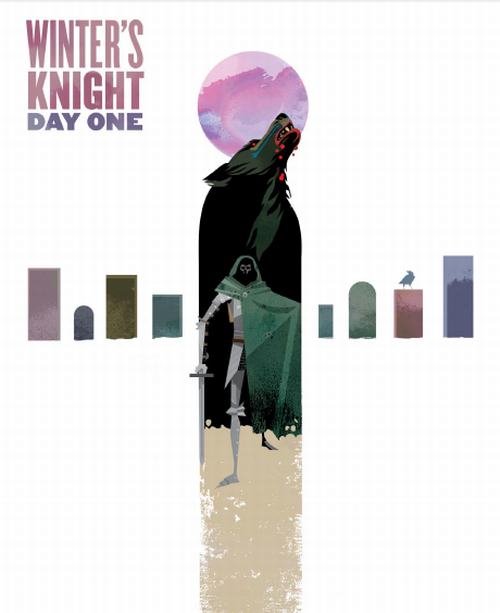 The Great Beast, the creator-owned Indy Brit comics publisher started by Adam Cadwell and Marc Ellerby, has a new title out this very month, and it is a truly beautiful looking piece of work. Robert M Ball’s Winter’s Knight Day One is wonderfully, delightfully different, a ‘silent’ comic, a wordless tale crafted in images only and relying on the reader to work with the artist to create the narrative inside their own imagination. Our own Richard reviewed it in self-published form last year (see here) and now it’s getting a wider release through Great Beast.

An elderly, weary looking knight swathed in a green cloak crosses a stark, barren winter landscape, the stylised art (which, to my eyes anyway, often felt like stills from a beautifully crafted animation) conveying a sense of chill and foreboding, from white wastelands to jagged, snow-covered peaks and bare, leafless trees where one of the few signs of life in the first pages – a jet black crow – sits like an omen, in one scene glimpsed in the foreground, beak wide open, the juxtaposition with the knight in the distance making it appear as if the bird is about to swallow him whole from the Earth. The few signs of human habitation are deserted, the statue of a martyr holding his severed head stands in icy silence before the houses in a scene reminiscent (in a good way) of something from Mignola’s Hellboy. 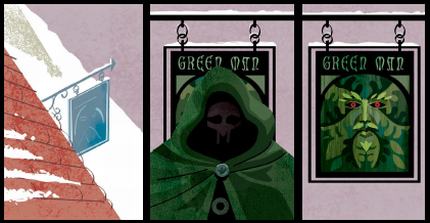 Finally encountering some life in this barren place the knight sees a magnificent stag. What follows that encounter I won’t spoil here, suffice to say we move through scenes which may be real, may be fantasy or may be delirious dreams. The open, text-free nature of the story leaves it to the reader to interpret the images, like interpreting a dream or signs and portents. Some elements remind me of the great chivalric romances (of which the modified, Christianised Arthurian tales are the most famous), others recall more modern interpretations (a couple of scenes reminding me very much of elements of Boorman’s exquisite Excalibur). The art moves from some minimalist scenes of a vast, frozen, almost empty landscape to some utterly gorgeous, much more colourful, dream-like moments.

Your interpretation of the story may well trigger different thoughts and feelings, and that’s the beauty of this very open work. Every text – book, painting, music, film – we read is always interpreted a little differently, depending on the reader’s experiences and knowledge, of course. Taking in a tale, in any form, is never a passive experience, our brains tick and fizz away making connections to other memories, other books we’ve read, films we’ve seen, music we’ve heard, and so the reader is always in a form of partnership with the storyteller. With Robert’s achingly beautiful tale that interpretation on the part of the reader is left much more invitingly open – he’s trusting the readers to be a part of the story’s creation here, and that’s not just giving someone a compelling reading experience, it’s giving them a wonderful gift, because when you can engage with a story like this it becomes much more vivid in your imagination, that realm where all stories reside. 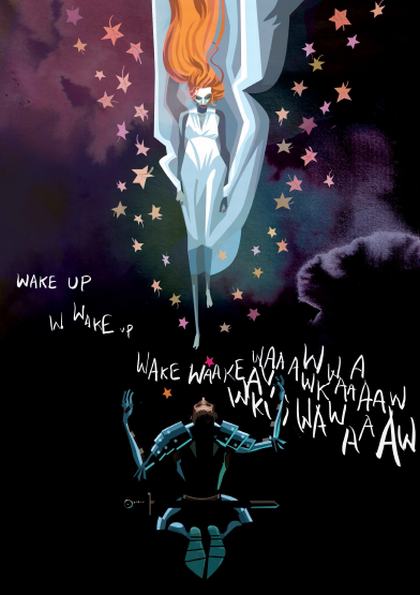 Winter’s Knight: Day One is published this month in both print and (DRM free) digital, with Day Two scheduled to follow in November and debut at Thought Bubble.