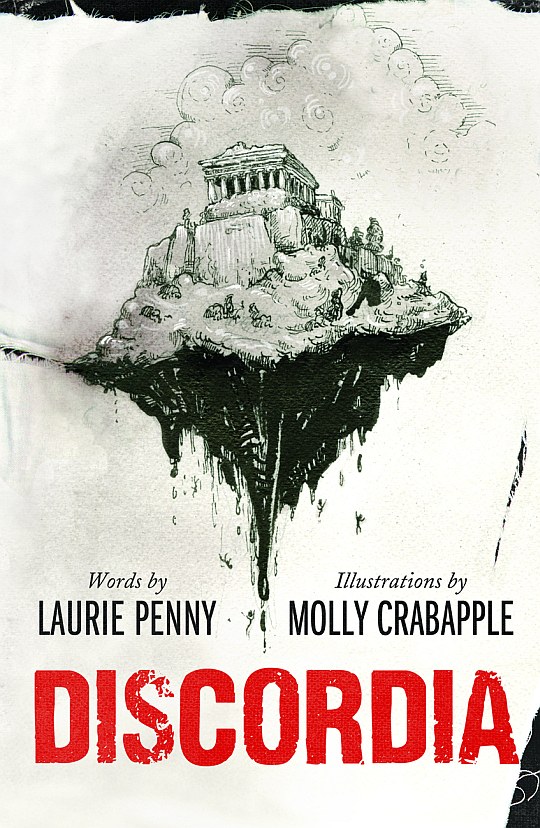 This digital only book from Vintage is billed as “the first feminist-art-gonzo-journalism ebook ever published, and the best you’ll ever read”. Well I can’t say I’ve double-checked the claim to be first, but it is certainly a fascinating read – and one that is likely to make the reader progressively angry. This may be a little outside our normal sphere of reading coverage, but a chum at Vintage was kind enough to zap over a copy because they knew we’d covered some of Molly Crabapple’s work, and I’m very glad they did as the combination of well known journalist Laurie Penny’s text and Molly’s quite excellent illustration work combine to create an engrossing insight into current events in Greece.

Anyone who has followed either Laurie or Molly’s work will know that both have been actively involved in the raft of protests which most Western countries have seen in recent years, most notably the Occupy movement, and both have documented a number of events in those protests in their own style. Discordia grew out of those experiences and with Greece suffering even more than many other economies and contemplating yet more severe austerity measures to add to the miseries already being endured they decided that this was where they should head to try and dig behind the frankly rather uninformative (at best) or downright misleading (at worst) reports we’ve seen on the situation in our own media through the revolutionary approach of talking to some of the people involved and listening to their first hand accounts. Yes, I know, that’s one of the basic 101 rules for investigative journalism, but it seems far to often to me to be a rule that too many hacks and their editors ignore in favour of a simple write-up that questions little and offers nothing of substance. Hurrah then for those like Laurie and Molly who still follow that time-honoured, venerable yet still indispensable rule. 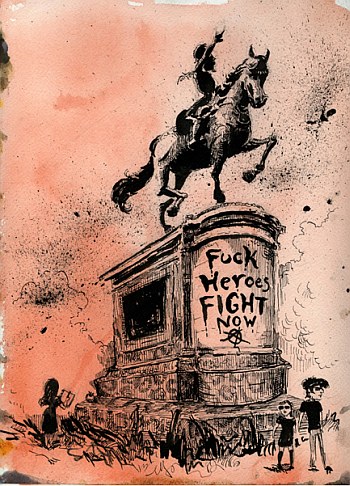 “In Athens, the writing is so thick on the walls that it blots out the street signs. As you lug your suitcase downtown from Syntagma Square, graffiti covers every hoarding, every pillar, every shopfront. Angry words in red and black and Greek and Spanish and English plaster the streets, ghostly faces in hoods and skulls and stick figures contort over the brickwork and spill onto the pavement.

The words ooze over the street furniture and lamp posts. They crawl up the monuments and statues that attempt to remind travellers that this is still a classical city. ‘Fuck heroes – fight now’ is sprayed in spiky black letters over the base of a statue of Theodoros Kolokotronis, a general in the war of independence against the Ottoman Empire.

One of the designs that crops up again and again is a stencil of a girl with a suitcase. She is in her early twenties, and she’s a real person, which is to say that for a cartoon woman her waist and hips are of a biologically plausible ratio, and she wears plain old jeans and a T-shirt, her hair scraped back. Sometimes she is dragging her bags behind her and sometimes she leans against them and into the distance, always leaving or just about to leave.

And Molly and Laurie do talk to people, all sorts of people – left wing activists, former party members who have given up on the established parties because they realised the mainstream simply wasn’t capable of representing ordinary citizens properly anymore, journalists (many of whom continue to try and report on unfolding events despite not being paid in months), immigrants, older folk, younger folk, and it’s hard reading. Times aren’t exactly rosy for most Western economies, goodness knows, but the tales these Athenians tells to our intrepid travellers are frequently upsetting and many of them will leave you angry – and you should be angry at the suffering and injustice, and the increasing feeling that money is more important than people’s lives. The feeling of despair is palpable, and Laurie and Molly talk and listen to many locals, those native born and those who emigrated to Greece. Most media reports here seem to me to present the protests in Greece, such as the recent general strike, as a general discontent at troubles brought on because many dodged paying their taxes and their politicians cooked the books to join the Eurozone (while EC officials largely turned a blind eye for political expediency). This gives a much more informed, nuanced view of what’s going on and the causes of it, far too much of which hasn’t been reported very widely in the English language press. 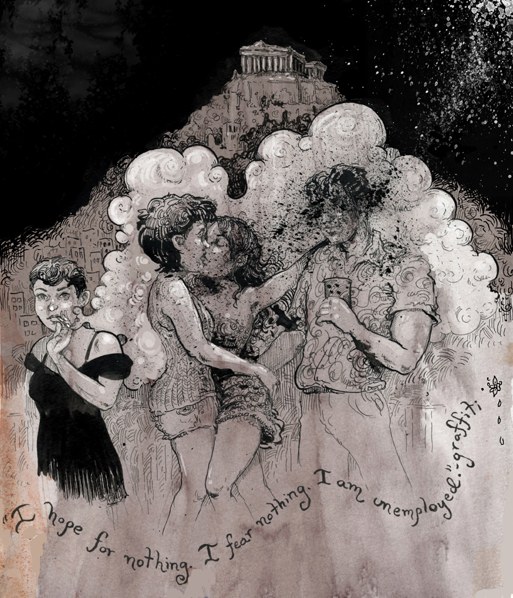 And for those of us who read our history there are far too many disturbing similarities to the 1920s and 30s, the Great Depression – not just in terms of terrible economic hardship, poverty and the dashing of hopes, but in the seemingly relentless growth of ‘hunger politics’. The black shirts are marching again and people who are suffering are sadly only to eager to have someone to blame, even if those they pick on have nothing to do with the nation’s woes, and the far right groups, then as now, exploit that fear during the lean, hungry times, stoking prejudice and bigotry in the guise of doing something positive and constructive, while their party leaders attempt to portray them as genuine democratic political parties, while their members are actually often out on the street attacking unionists, immigrants, homosexuals and anyone else who they deem different. Sadly Greece isn’t alone in this – many countries have variations on these quasi-fascist organisations who pretend to be acting out of ‘patriotism’ but who are really small-minded hate-mongers happy to exploit the situation to gain any power they can.

The difference in Greece is that the main far right party, the Golden Dawn (now infamous for one of its politicians physically attacking an opponent during a televised debate, which gives you an idea of the thuggish roots of this group) operates openly in the streets, intimidating, attacking, like something from the rise of Nazism in Weimar era Germany, while some in authority, especially in the police (who despite the massive cutbacks in the rest of government spending can still spend millions to buy stocks of CS gas to use on their own citizens), where it is estimated about 50% of officers supported the Golden Dawn at the last election, and have frequently been seen to turn a blind eye to their violence, arresting victims and doing nothing about the fascist bully boys who attacked them. And while some may think that can’t happen here both Laurie and Penny compare this to some of the Occupy protesters in the US who have found themselves manhandled roughly, arrested, pepper sprayed in the face (often right under the lens of the media, with little or no come back to the officers involved) – and they’re not talking left wing agitators, they’re talking the sort of college educated, middle class people who would normally trust and support the police and suddenly finding those same people they trusted are willing to turn on them when they try to use their right to protest. It’s a terribly bleak prospect and it’s no wonder Molly depicts the Greek police in such a monstrous manner, like some warped form of human and animal that came through a lens of  Steadman and Gilliam. 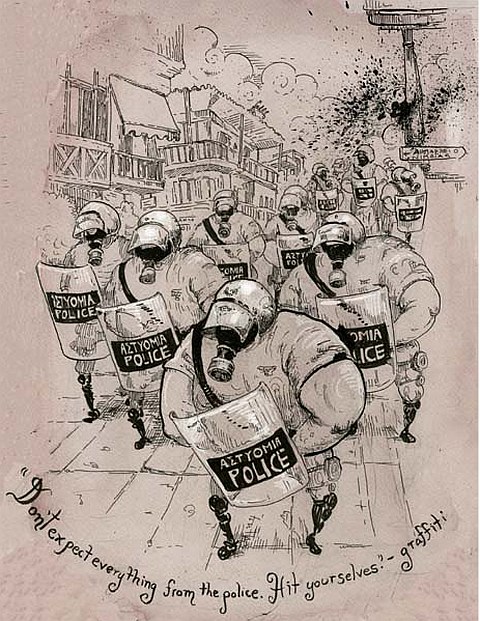 For those of us who have always valued Classical culture there is something especially poignant about these dreadful events occurring in the birthplace of democracy, from the ancient city-state that has influenced the development of the whole of Western civilisation – politics,philosophy, the rhetoric of reason, the arts, architecture – and seeing it not only buckle under the economic hardships but the society turning on itself, the splintering of the left, the rise of, let’s be honest, neo Nazi right wing hunger politics (right down to a logo that is quite obviously a variation on the swastika and black-shirted hoodlums marching in the street) and the oh-so easy targeting of anyone different (immigrants, homosexuals). What Molly and Laurie present here is a view of that old beast History knocking on the door to repeat some of itself, seen through the eyewitness accounts of the people trying to live through it and trying to deny it entry to the world once more. Sad, but why be concerned with it when we have our own problems? Again as History shows that was an attitude many had to the rise of the Nazis as Weimar Germany crumbled and eventually faded into dictatorship. Which isn’t to say Greece would go that way, but it has too many alarming parallels to be comfortable for anyone reading this, and besides, the way all of our world economies are interlinked in the modern world huge upsets in one nation have knock on effects on others; we all have similar worries and problems and being informed is always preferable to ignorance.

Both ladies offer up a very accessible view into the Greek situation, along the way taking in the austerity and Occupy and other related movements and protests in the US, UK and elsewhere, exploring economics, corruption, incompetent authorities, racism, sexism and the damned mess these negative qualities lead us into and showing how those problems in one nation relate to those in another. Laurie’s prose is, even when describing terrible scenes, enjoyable to read, while Molly’s artwork adds another dimension to the whole book. Molly herself notes that in an age where journalists and citizen reporters armed with digital cameras, web enabled phones and the like can beam photographs and video of events as they happen she wondered about the role of the artist; determined to be out of her studio and recording it in the field, she felt in a digital photo-rich world there was still a role for an artist in recording events and the thoughts of those involved, and I agree (in much the same way  – much as I admire photography there is still much to be said for illustration in reportage, in filtering through the human mind via the brushes, and Molly delivers a mix of rougher sketches carried out on the spot and more polished, finished works, more than a few of which I thought showed a Steadman influence, which I mean as a compliment. Well written prose or well executed art can be powerful, but combine the two successfully and you create a work that becomes more than the sum of its parts. Much recommended, thought provoking reading.