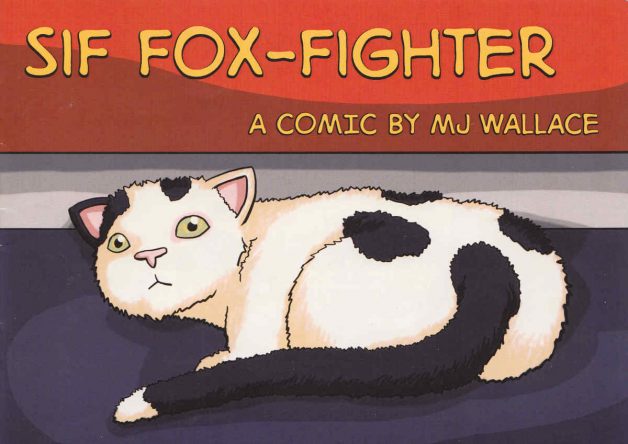 This was another comic picked up at the small press comic fair which I am belatedly getting round to, having bought several, put them aside then as usual got busy, had some other books waiting and am now catching up on at last. I couldn’t resist this one when I saw MJ’s stall. I have a huge affection for animals in general, and cats in particular – besides I just couldn’t say no this wee face on the cover above.

Sif Fox-Fighter is a short, landscape format mini-comic about MJ and partner and flatmates adopting a cat. Not just any kitty though, they pretty much look for the saddest feline from the Cats Protection League folk and take him in. Sif, as he comes to be named by the people in his new furever home, has healthcare issues and is also very nervous – he’s had a rough time and isn’t secure around people or new situations. As anyone who has ever lived with animals of any type will know, rehoming is very stressful. Heck, even just moving home can be very stressful to cats, dogs and our other animal chums and that’s with humans they know and are comfortable with already. 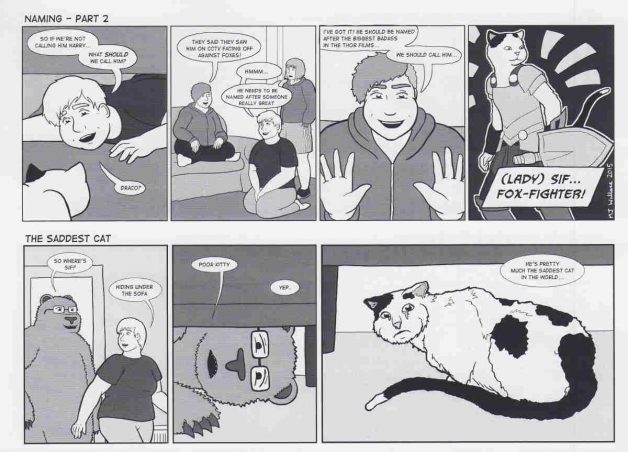 I’m sure many of you have been to animal rescue shelters, and have seen that scared look on an animal’s face; it’s a look which is part fear and nervousness, but also contains a need, a need for love and affection. It’s not an easy path, to be sure – even starting with a young kitten it takes a while to establish a bond, but with an older animals, especially one who has been through the wars, it takes an awful lot of patience and a big, big heart. But it’s worth it, oh so worth it. And that’s one of the things MJ brings out rather beautifully here in such a short collection of life with the new kitty strips.

This collection covers the flatmates adopting Sif and trying to make him comfortable. Like a lot of nervous felines he hides, he doesn’t get too close to people, he’s wary. A cat, even the domestic moggy, is an apex predator which incredibly sharp sense, reflexes and guided by instinct, like any animal you can’t take their behaviour for granted. Like having kids to take care of you can try your best but often just have to roll with the punches. And to their credit the whole flat tries their best not to crowd Sif, he’s introduced to his new home, given space, allowed to explore. You really want to pick them up, cuddle them, smother them with affection, but you simply can’t push these things, the animal has to feel comfortable, secure, when they do then they may come to you when they are ready. And that’s what they do, give Sif that space and time. 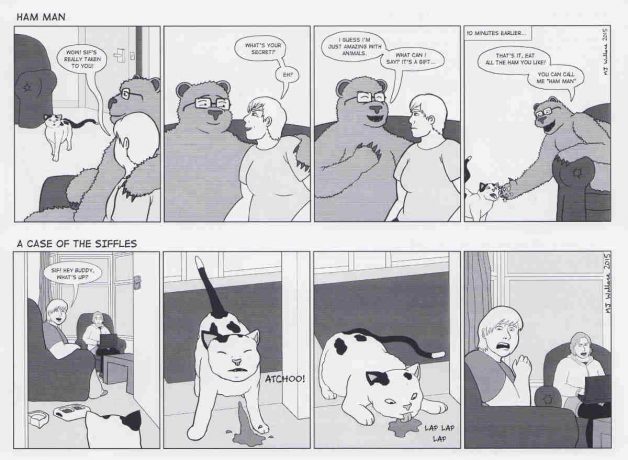 It’s a slow process as anyone who has been through it will know, but that moment when they slowly begin to come to you willingly, that first wee head bop, that first contented purr as they sit on your lap, it’s just joy and delight. It’s quite something that cats, dogs, horses and other animals so often come to trust humans, totally different species, and yet they can and often do. And the inner joy you feel when an animal chooses to trust you makes you feel amazing, it lifts the spirits. Like humans they bond with those around them over time, settling into rhythms of life with us, sharing trust and emotions, and again that’s something MJ shows here beautifully.

I’ve heard it said that animals don’t really have expressions, it’s just us reading in our own expectations, and that they don’t have the same emotions as us. Frankly I don’t believe either of those claims for a moment, and I doubt most people who’ve shared their lives with animals would agree either. A cat or dog face may not move the same way ours do when making expressions, but you can still pick up on them, and on their body language, and they pick up on those of their humans. And on the emotional side, yes, they’re not human, their emotive states may well be different from ours, but they are close enough that we can, over time, share a very deep bond. 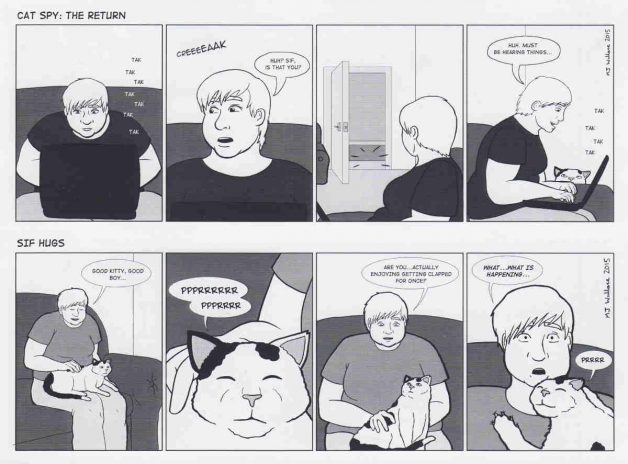 MJ doesn’t overly mine this story too much on the emotional front, rather presenting the changes as Sif becomes comfortable with his new humans, and lets the emotional side speak for itself with the art showing those expressions some say animals don’t have. It’s warm and engaging and rather lovely and I think anyone who loves animals – cats or otherwise- will recognise a lot in this collection.

This Review was originally penned for the Forbidden Planet Blog