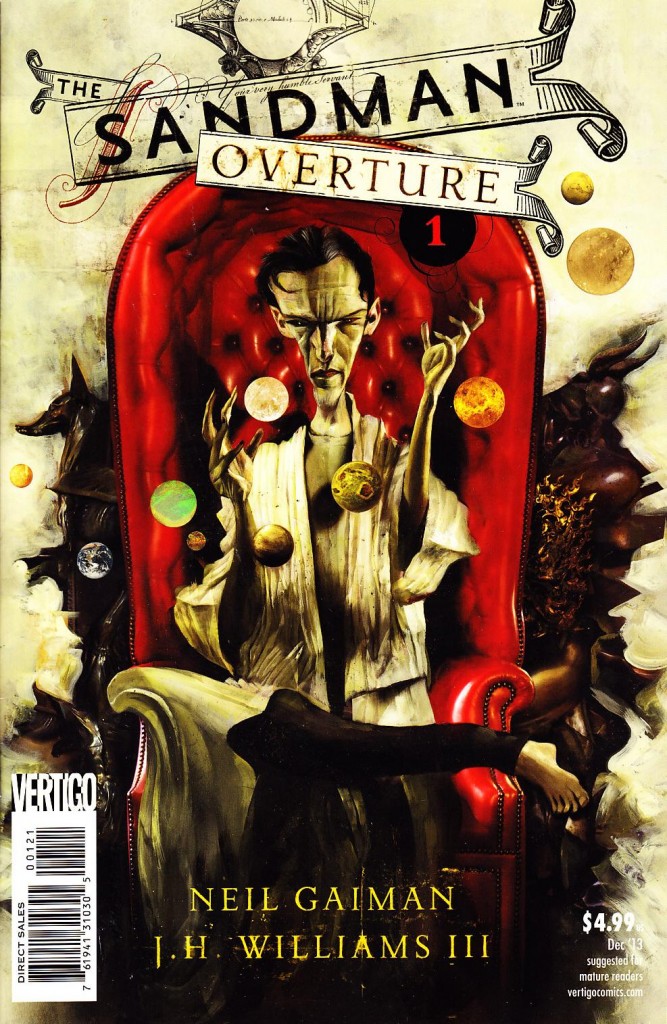 (above: variant cover art for Sandman Overture #1 by Dave McKean, below: below cover art by JH Williams III) 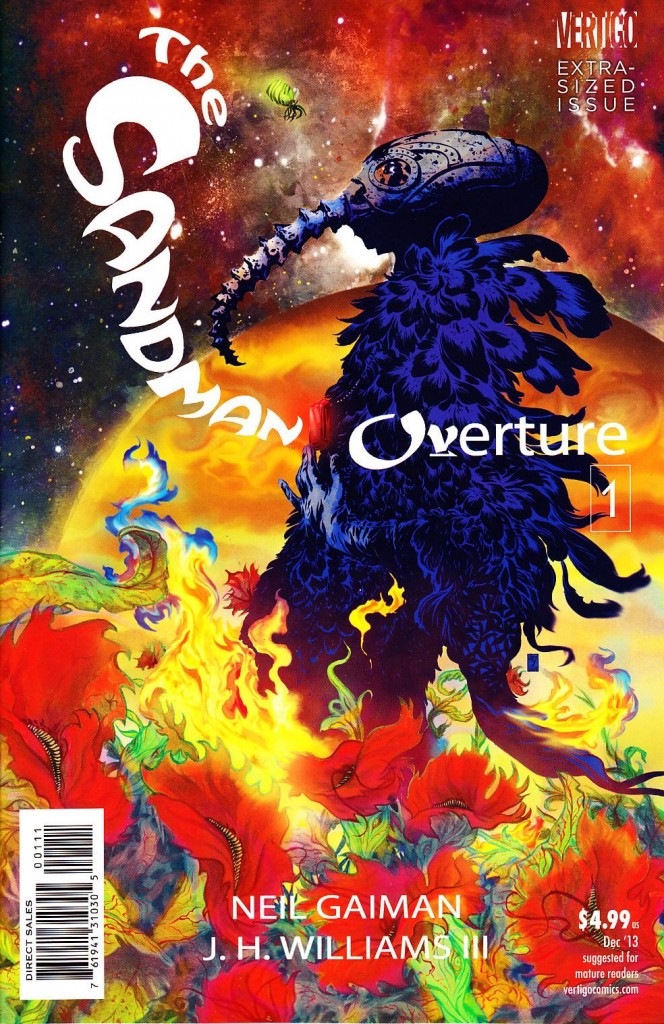 We blogged months ago about the raft of new titles coming from DC’s acclaimed Vertigo imprint this autumn. We’ve already seen the first issues of Hinterkind and Coffin Hill, which I very much enjoyed (reviewed here and here, respectively). But with no disrespect to those fine creators I (and I suspect many of you) have been waiting most impatiently for this week’s Vertigo release, nicely timed for the Halloween week, when dark things are allowed to leave the imaginary realms to walk the waking world, a series which is synonymous with the Vertigo imprint – The Sandman.

To say Neil Gaiman’s return to arguably his greatest comics creation comes loaded with anticipation is an understatement. And as Neil himself pointed out during his talks at the Edinburgh International Book Festival in August, he was keenly aware of that. As he put it, when he first wrote Sandman few folks knew who he was and they were in a position to try what they wanted and push the sort of storytelling they wanted to try in the comics medium. This time though, it comes long after the original comic run, then the collected editions which introduced Sandman to a new and wider audience, and which are still introducing them, because there is always a reader who will be coming to it as a new discovery, because books are wonderful that way, they wait patiently for us to pick them up and they don’t care if you were one of the first to pick that book up or if you came to this author many years later, the book will welcome you in with open pages. But yes, Neil said he felt that all that much larger audience were, in a sense, there, looking over his shoulder, all with their own expectations. It’s the flipside of success and quite a burden on a writer. Thankfully Neil is one of our finest spinners of tales, and clearly he still loves the Dreaming… 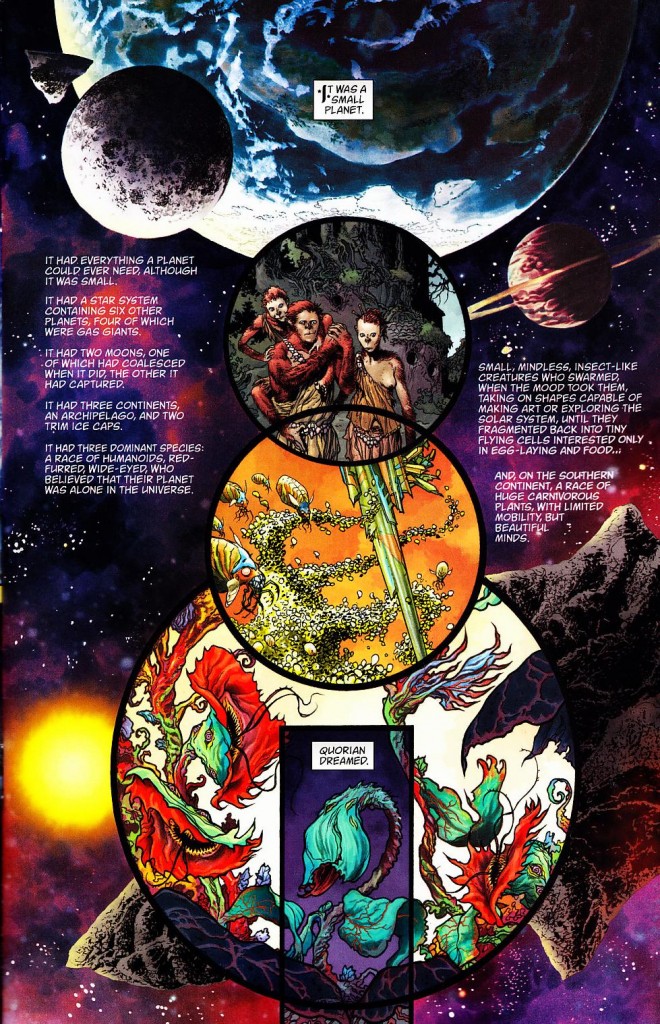 As many of you will know Overture will take in events that preceded the first Sandman story arc, where a Crowley-like magician summoned and captured Dream (although he was trying for Dream’s older sister, Death). We know from that tale that Dream was returning from some great trial in a vastly distant galaxy, tired beyond endurance (one reason he was captured so easily by simple summonings), but we never knew what those earlier events were. Here we open with a distant world peopled by different lifeforms, including sentient, carnivorous plants (Dave Stewart is, as always, to be commended for his colouring work, especially on this opening page); as one plant sleeps it dreams, and as it dreams it behold a strange plant, dark faced, black-leaved – Dream in one of his aspects. He feels something is wrong with the Dreaming on this world, although everything on the surface looks fine, but his sense of wrongness increases until suddenly it ends in shrieking and fire…

We cut to Britain, during the First World War, a pale man with a sinister smile and dark glasses pays a visit to a handsome young clerk in a store, telling him he has information on his brother, missing for some time after one of the battles on the Western Front and offering to meet him later. Regarding the man’s dark glasses the clerk asks “Sir? Your eyes? Were you hurt in a gas attack?” “Something like that,” replies the man, “You will find out all about my eyes tonight…” It can only be the nightmare, the Corinthian, and in a touch fans will love the panels from this scene are viewed through frames shaped like teeth, a hint to the Corinthian’s rather grisly habit and his endless hunger, as well as a nice visual nod to his nature by Williams. 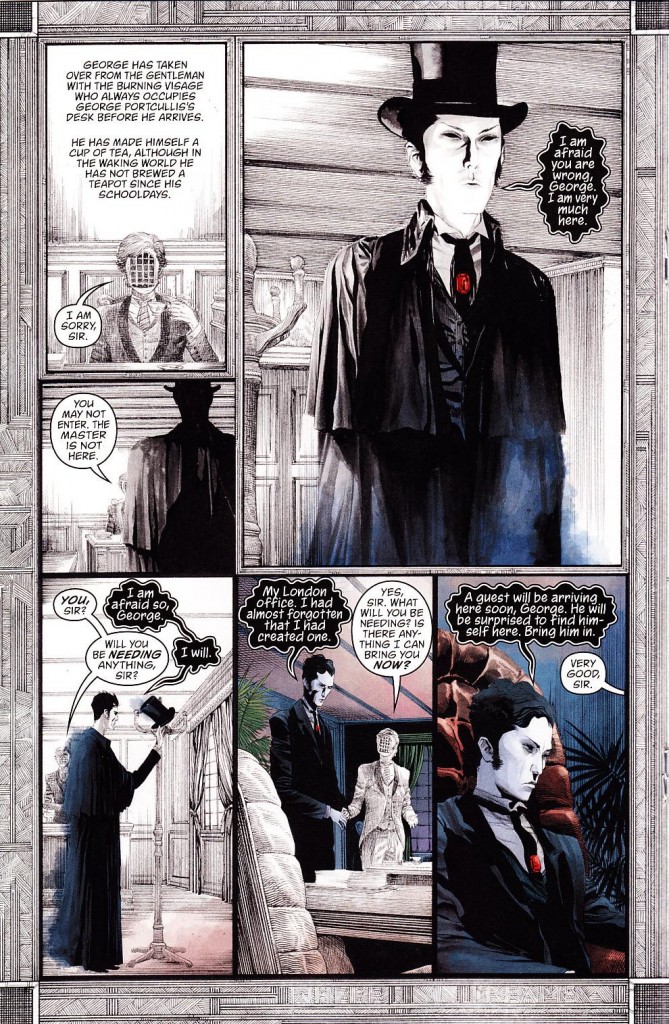 Neil also manages to slip in appearances from several other favourite characters in this first issue – Destiny and Death (looking wonderfully like a Gothic Mary Poppins) discuss those distant event we glimpsed at the start and what ramifications they may have for Dream, and we briefly see Merv Pumpkinhead talking with Lucien in the Library of Dreams (where Merv is delighting in telling how he put ‘Siggy’ – the inference is Sigmund Freud – ‘right’ about his cigar). These are worked into the events rippling out as a consequence of what we glimpsed on that distant world rather than simply pushed in to make the fans happy, although I am sure there would have been an intent to show some of the old characters for that reason too. 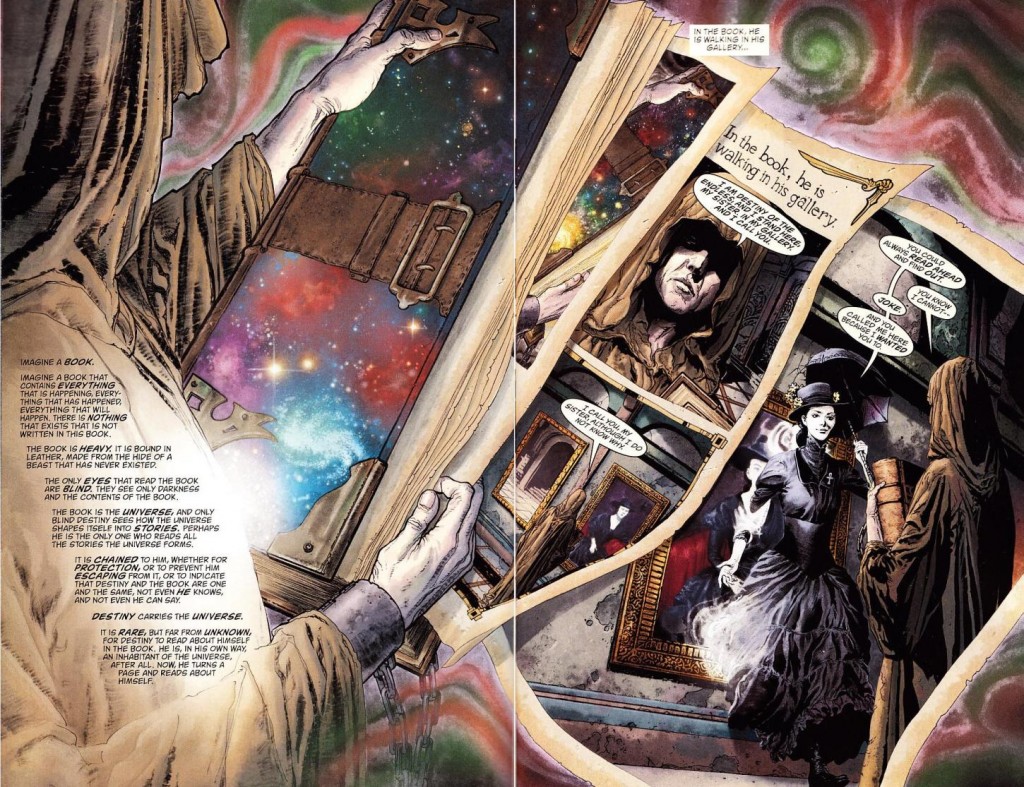 I don’t want to spoil the whole issue for you, so won’t continue to the later pages here; suffice to say the Corinthian’s activities in the Waking World draw Dream’s attention (a rather natty Edwardian-era Dream visiting his London Office, satin cloak and top hat), but as he does so those ripples set in motion right at the start of the issue and which Death and Destiny had discussed are starting to reach this aspect of Dream and he feels that things are about to be set in motion…

Alright, I am biased, Sandman is my favourite comic series and one I still delight in returning to every now and then, so I may be a little biased in my desire for this to be good. Although as someone who read it right from the start you might also argue I may be more critical of new material. I can honestly say I tried to approach this without either of those old-hand fan filters on; I came to it, at least as best I could, as someone who simply likes a good tale well-told, and I was not disappointed. In a few pages Neil not only re-introduced characters he set up the first inklings of an event which will have huge ramifications for Dream, and does so with a structure that, like the original series, is a beautifully constructed narrative. 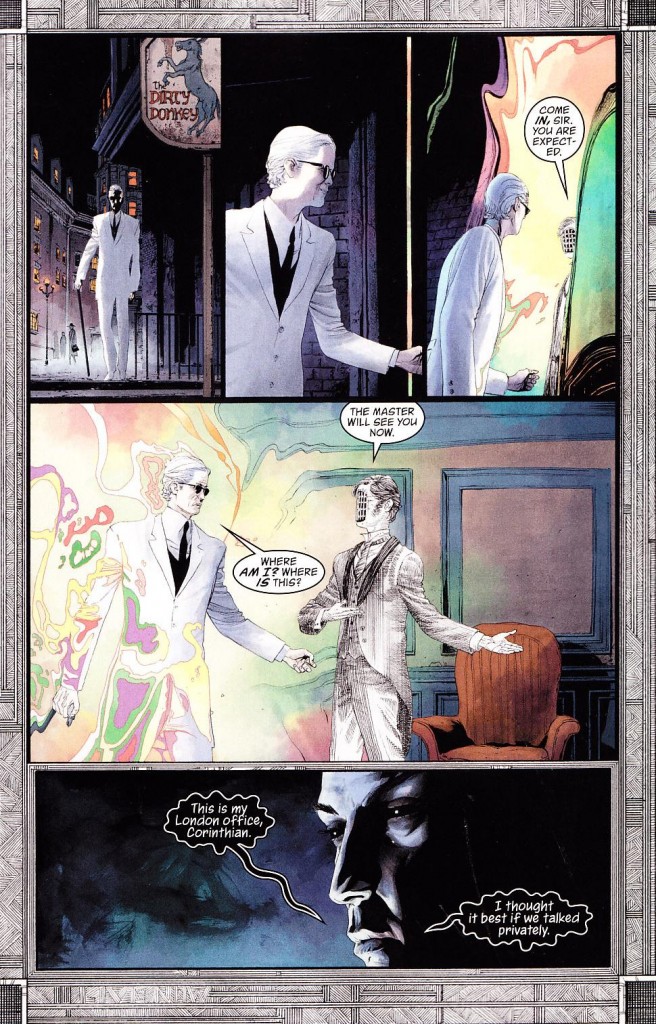 And, as you might expect, JH Williams III’s artwork is simply beautiful, and more than that, as with his work in his quite excellent Batwoman run or with Moore in Promethea, he exhibits a wonderfully inventive flair for interesting layouts and page designs (including a terrific double-page spread which folds open to reveal a stunning four page scene). Never just to be showy, but perfectly integrated into the service of the story and atmosphere, pushing the ways in which our beloved medium can carry a story and draw in the reader’s imagination, a perfect fit for Neil and Dream alike. I’ve said it before and will say it again here; I think Williams is one of the finest artists working in the medium today. A beautiful, elegant piece of work and a first issue which is, if you will forgive the weak pun, something of an overture to the story of Overture.