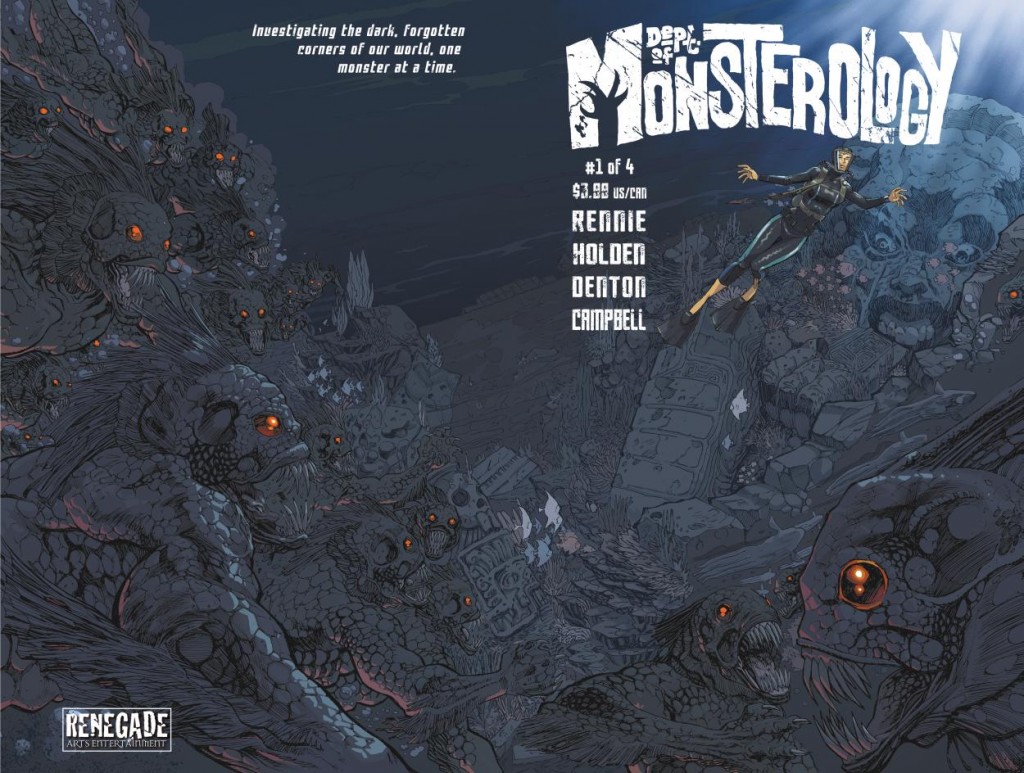 Starting in October Renegade Arts kicks off a new mini series from Gordon Rennie and PJ Holden, two creators well known on the UK/Irish comics scene, especially for their 2000 AD work. Dept of Monsterology will be a four-part mini-series, which sees field groups from Dunsany College’s Department of Cryptozoology, Mythological Studies, Parapsychology and Fortean Phenomena.

We first meet Dunsany’s ‘Team Challenger’ on board the Derleth, in the South Pacific. While Professor Javier De Tovar, on loan from the University of Salamanca, and Victor monitor from the ship their field expert Amelia Court dives below, investigating some ruins but finding most have fallen into a deep undersea trench; quite possibly a lost civilisation, but is it the type they are interested in? And are they able to explore further before some rather peckish looking humanoid/piscine hybrids decide they are the human equivalent of sushi… 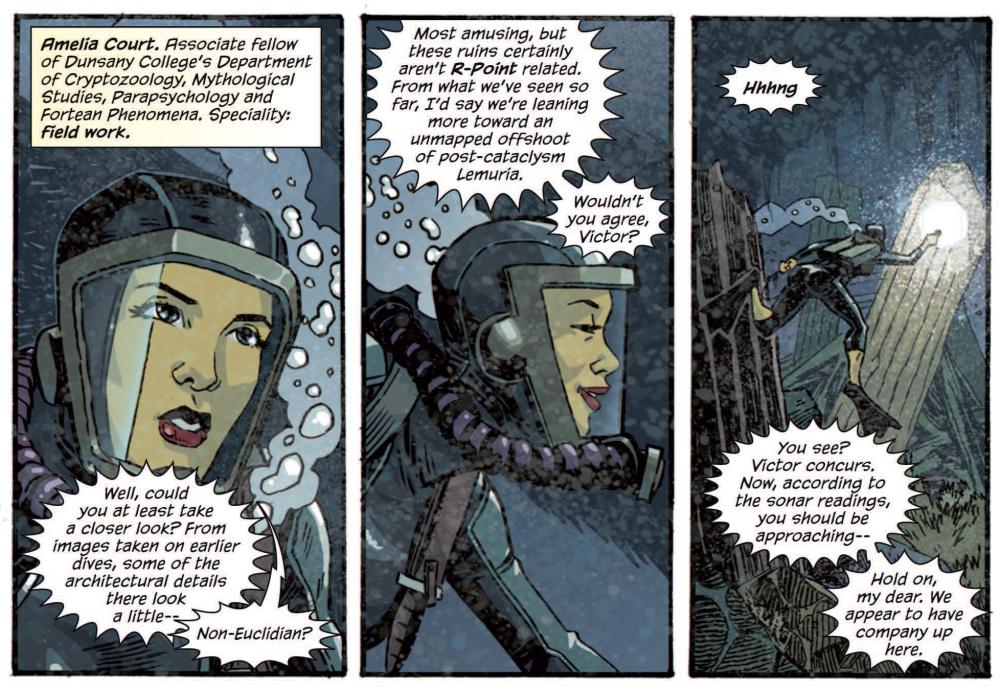 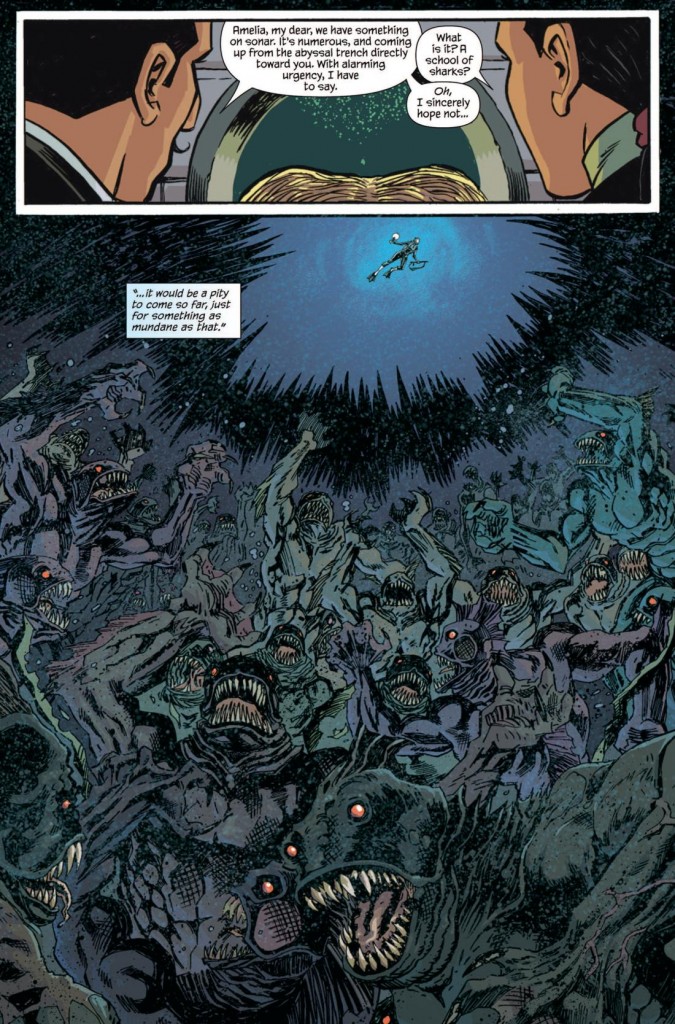 The second half of the issue deals with ‘Team Carnacki’, where young Samwi flits her lithe form easily over the roofs of nocturnal Budapest, guided telepathically by Belasco, Doctor Jan Sonam (an Oxford and Stanford scholar now but a former Ghurkha Rifles veteran, so handy in a physical struggle too) and Doctor Calvary. What looks like some ‘wire-fu’ style flitting across roofs is actually Samwi’s spirit form – her body back at base while her spirit form explores a building for a mysterious stolen consignment from China. But on finding the space where the goods are hidden she finds broken rubble and the dead bodies of the thieves – they are too late, something is loose… 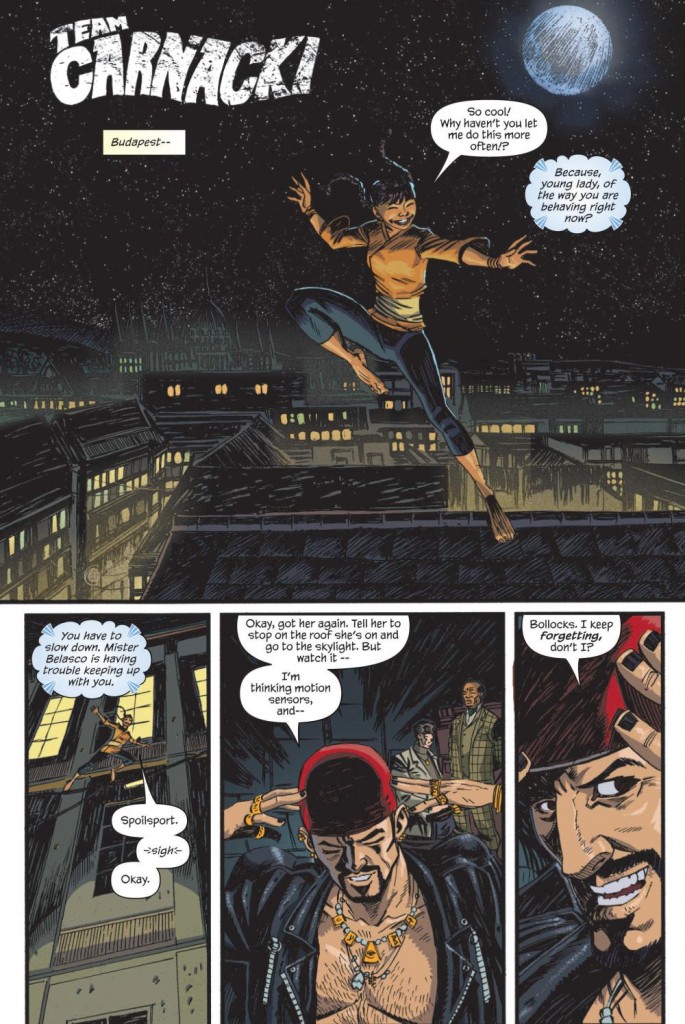 This is a cracking supernatural adventure yarn; as you’ve probably already garnered from some of the names – Challenger, Derleth, Dunsany and more – this is a series which is very well aware of its influences, and also realises most readers will be too, and plays to them very well. There are all sorts of elements at play here, influences from the classic – Lovecraft, Conan Doyle and more – to the modern – notably Mignola’s wonderful Hellboy. Rennie has never been one to simply riff on popular genre elements though, he’s always been good at referencing other works genre readers will know and love but making them quite his own (as he did with the excellent Absalom, for instance). PJ, as ever, crafts some lovely art to accompany the script, pitching it nicely somewhere between Mignola meets European adventure tale bande dessinee.

Structurally I was surprised at the two-part approach, especially in a first issue. First issues are always very much about introducing characters and the initial set up, as well as hooking readers into wanting to read the following issues. Splitting a first issue into two halves dealing with two groups seemed like an odd choice to me – it can be hard enough to do justice to characters and narrative in a single first issue, after all, without doubling the trouble. But then of course Rennie and PJ are both schooled in the classic Brit comics weekly anthology school, where you have to make episodes of only three to five pages work well, so having thirty odd pages is a luxury for them, no doubt, and the necessity of economy in characterisation and narrative learned in that Brit weekly publications like 2000 AD pays dividends here as the pair skilfully fit these two halves of an introductory set-up into the issue in a very satisfying manner: the initial set-up revealed, the main characters introduced and some of what they can do shown and the lingering ‘what next’ thread dangled enticingly. All in one issue. Damned good comics storytelling, if you ask me. 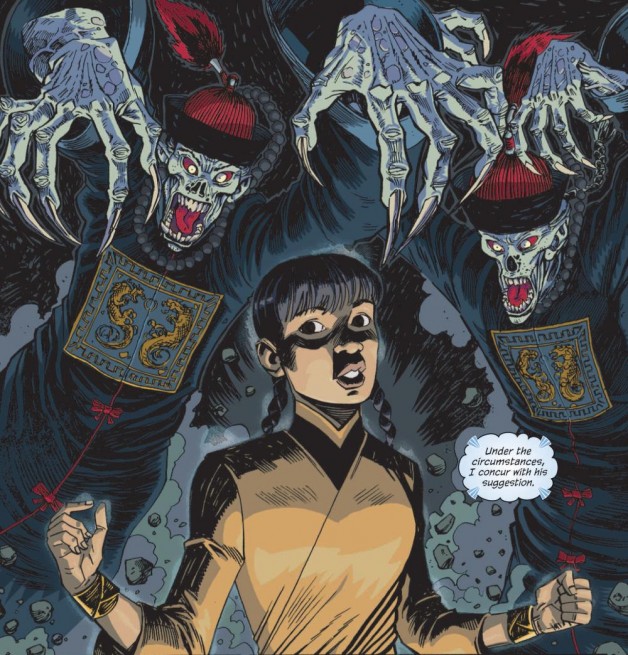 I’m looking forward to the rest of this series – it’s in pre-orders right now and I hope you’ll give it some support, it’s ideal for those of you (like me) who love a clever work with Mignola and Lovecraftian tones. The first issue is in the current issue of Previews and us due for publication  in October, it can be pre-ordered via our comics subscription site now.

This review was originally penned for the (shiny new-look!) Forbidden Planet blog