Government, supermarkets and other buyers and representatives of dairy farmers are still negotiating over the scandal of large companies like supermarkets paying such a low price to farmers for milk supplies that they make a loss on every pint. The large supermarkets, who are often the target of ire for using their bulk buying and selling power to bully suppliers like farmers into ridiculously low prices have retaliated however and explained the very low price of milk is not because of supermarkets rigging prices through buying power but caused directly by online milk piracy. In this they have been backed up by figures from the music and film industry who say that alongside music and movie piracy the illegal downloading of copied milk via web pirates was costing farmers dearly and destroying the industry. It’s thought when they attempt to lobby yet again for draconian new internet piracy laws the dairy farmers will also be leaning on politicians to bring in penalties such as the ‘three strikes’ rule for anyone suspected of illegally downloading milk or any other dairy products. 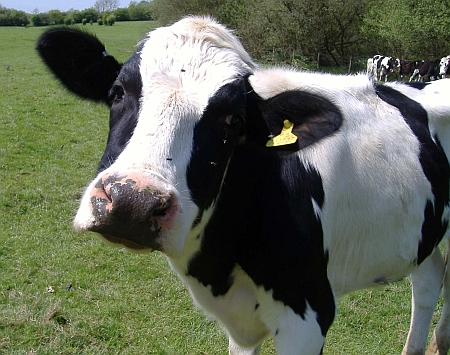 (a dairy cow yesterday, she answered no comment to the Woolamaloo Gazette’s reporter when asked about milk piracy)

According to Media Guardian illegal internet dowloads of movies and TV shows (even so-far unscreened shows such as the Friends spin off Joey) are at an all-time high. Given the increase in broadband access the problem can only become greater one would assume. Apparently more illegal movies were downloaded last year than music. South Korea is the biggest culprit, probably because an amazing 60% of the users have high-speed connections. Some 20% of UK web users admitted to the practise, which probably means it is actually a much higer figure since not everyone will put up their hand even in a confidential interview.

Obviously this is hitting film studios and cinemas, not to mention DVD sales. In Europe the high price of new DVDs was cited as a reason for downloading the movie instead, which I can well understand. Personally I almost never buy a DVD when first released – they are simply too damned expensive, being anything from £16 – £20 odd for normal releases or much more for multi-disc sets. Quite frankly they are ridiculously over-priced and I know full well that within a few months the prices will drop and the same title will go for much less or be in a multi-buy offer. Given the fact that 6 months later the same DVD could be 30 or 40% cheaper why would you buy it when it comes out? Right now I would like to get The Last Samurai, but frankly it is not worth buying, even online, for a few months because I know if I buy now while it is new I will be ripped off and the price will drop in just a few months.

I doubt the studios can completely halt this piracy – someone will always want something for nothing after all – but a more coherent and fairer price structure would certainly help, encouraging more folk to buy instead of downloading, if they felt they were getting value for money. I wonder how this will affect the BBC’s plans to digitally archive their TV output in the way they now do with radio shows. They plan to archive shows for 7 days and make the download of them free to all, but with safeguards built in so the shows can’t be copied or kept for more than a few days. Unlike Tivo-style Sky plus this system would completely free viewers from the schedules since you don’t need to set your hard disc machine to record something at a certain time, you just pick what you want from a digital archive. So if you missed something or hear folk at work talking about a great show last night you can get it when it suits you. Pretty nifty, if it all works.

So much for piracy of DVD sales. I am moved to wonder if anyone researching the movie downloads has checked geography as well? Are folk downloading new movie releases more often people who are in a geographical location where they cannot easily get access to a decent movie theatre? And do the ones who do live near cinemas still visit them as well as download? Because my local cinema is always pretty busy despite all thsi downloading. I’m also reminded of the hoo-hah surrounding VCRs back in the early 80s. To begin with you could only rent films, not buy. Studios feared piracy and the death of cinema going if folks owned their own movies at home.

Well, before they sold them some of us did hook up two VCRs and make crude copies, but less so once you could buy for a decent price. And we still went to cinemas which became much better to compete, with ncier seat and better equipment. 25 years later and cinema is going great guns. In the 70s albums came with a skull and crossbones with a cassette underneath saying ‘home taping is killing music’. Hands up who taped their albums? And is the music industry still here? Why, yes it is. Obviously digital copies are more of a threat because of the quality, but although people may listen to a burn-copy album they will mostly still buy music too. Similarly with films and DVDs. This is not a new fear and while it is not groundless, it is being hysterically overblown (projectionists armed with night vision goggles to spot camera for Smeg’s sake!). What the various – converging – media companies have to do is what they have always done as technology changes and adapt to the new market. After all, most of these companies are owned by vast multi-nationals who are the first to lean on governments to keep the market place free. This by definition also means they have to face new technology and changes in consumer patterns or they will go under. That’s what happens in a free market (which they love when it suits them). I’m not condoning piracy but I still reckon given the success of movie companies in the last couple of decades that this is all being overblown. Back in the 50s the sudden spread of TV was to signal the death of cinemas. Companies worried about showing movies on TV despite lucrative money offers in case it broke the undsutry and no-one ever went out to the cinema again. Some studios even owned their own networks. Now we have multi-channel digital movie on demand and still we go to cinemas. And the same companies, by the way, who supply those digital movie services are often the same ones who offer us broadband access to get movie and music downloads faster… Methinks they do protest too much.