Nick Cave – Mercy on Me, 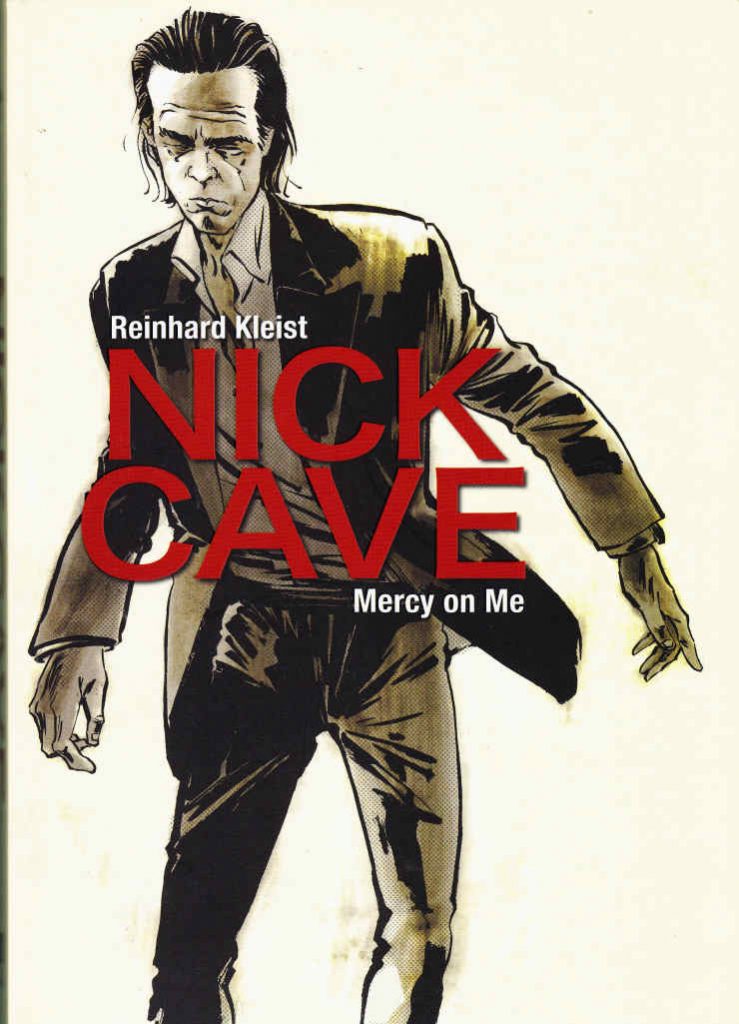 “I’ve been contemplating suicide, but it really doesn’t suit my style…”

I’ve been a huge admirer of Reinhard Kleist’s work going right back the best part of a decade, before it was even translated into English, impressed with a German journal’s spread on his Johnny Cash graphic biography, I See a Darkness (reviewed here). I was delighted when SelfMadeHero published the English-language edition, their first European translation, if I recall correctly, and happily the first of many since. Over the years since then I’ve read several of Kleist’s books, all published by SelfMadeHero, and even had the pleasure of chatting to him for the Edinburgh International Book Festival. And, like many of you, I suspect, I’ve been a Nick Cave fan for, well, most of my life. Singer, writer, poet, actor, an artist that doesn’t fit easily into any generic boxes, creator of works, some of which you can explain why you like, some of which, you can’t articulate, you just feel and know.

So finding out Reinhard’s new book was about Nick Cave? Oh yes, you better believe I’ve been more than eager to read this. I’ve been waiting months for it to arrive on my desk. And was it worth that wait? Oh yes. In fact I would say this is Kleist’s finest work since Cash: I See a Darkness. 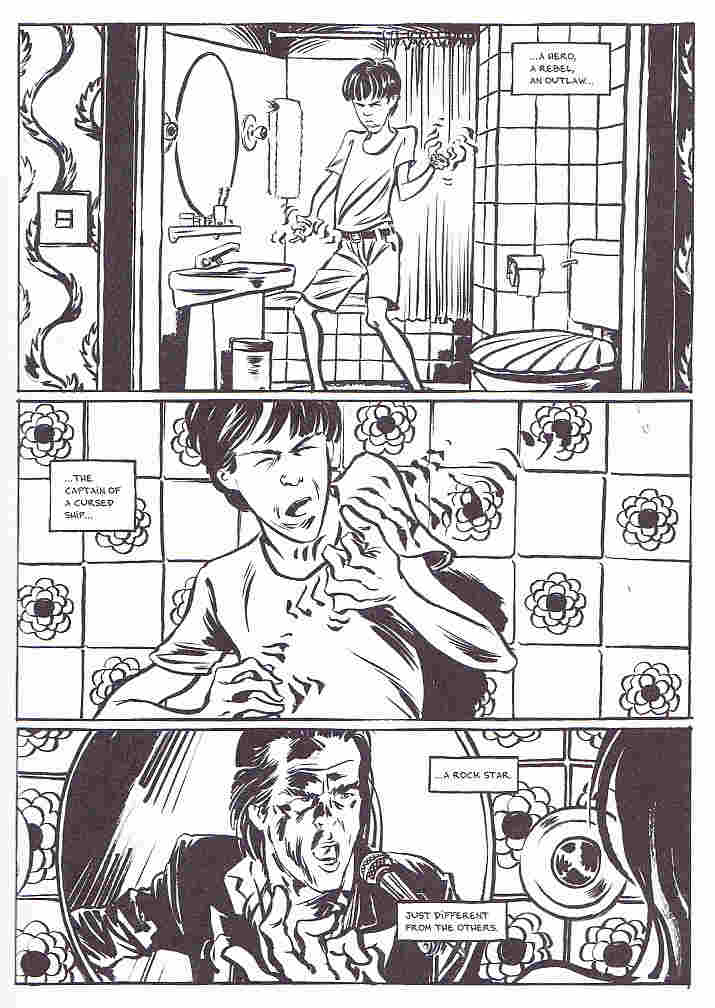 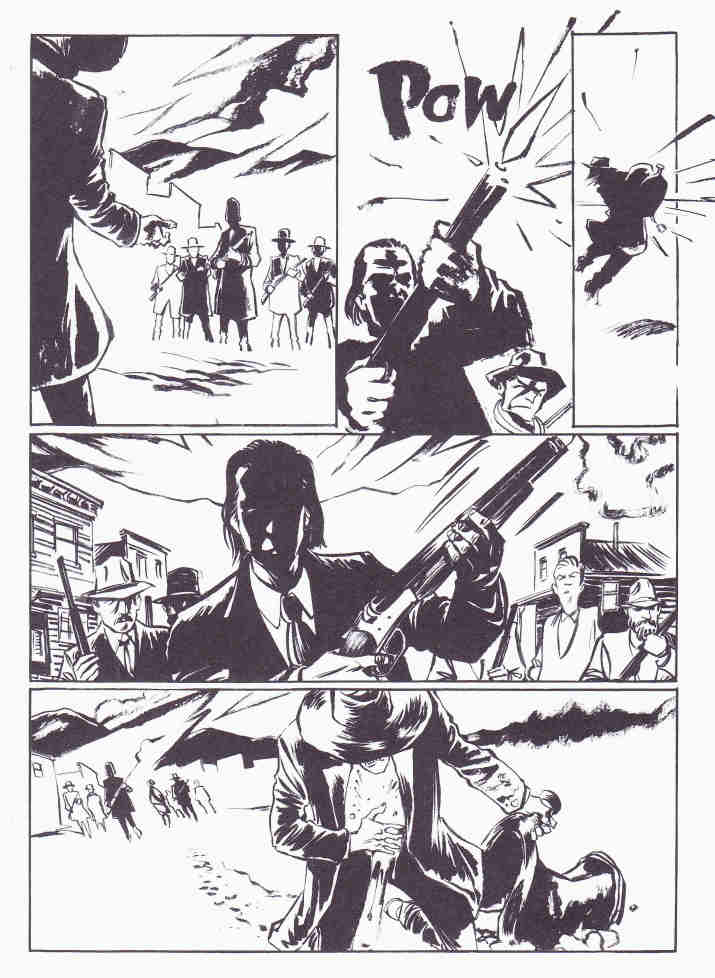 Nick Cave seems like a perfect match for Kleist’s approach to graphic biography, much like Cash. And in fact some elements here – quite deliberately, I would think – echo parts of his approach to that earlier work on the Man in Black. Cash started with Johnny hunting down a man, shooting him, acting out “I shot a man in Reno, just to watch him die”. Nice Cave: Mercy on Me begins with a young man, stifled in his small home, running away to explore the big, wide world, but coming into a town where a dark-garbed man simply shoots him – strangers not welcome. The shooter resembles a certain Australian singer, but it’s fair to say the young, wounded man is also an avatar of Cave’s personality. Later on Cash will be referenced more directly, as an influence in Cave’s artistic evolution. It feels highly appropriate, two very different musicians, but both of them with much overlapping in common, both driven by inner demons as much as creativity, both with the urge to perform, both of them ultimately larger than their music, becoming cultural icons, crossing genre boundaries.

I referred to this as a graphic biography earlier; that isn’t quite correct, that’s not exactly how Reinhard brings us into Cave’s world. He doesn’t go for the normal approach of a prose biography, the simple, chronological narrative of birth, youth, adolescence, adulthood and their respective events and influences on later life, neatly tabulated. Nor should he – we have prose works for that sort of thing. What Kleist does is more delicate and intriguing and ultimately highly effective: he takes moments from different points in the musician’s life – from his youth in Australia, travelling to Britain, the time in Berlin, the desperate, sometimes self-harming, self-destructive push to be different, change, do something new, through to the modern day, throwing in a burning road through a Hellish landscape, a certain Bluesman from a certain crossroads and even the great particle accelerator in Geneva. Wide-ranging doesn’t begin to cover it, and the use of his own words, Cave’s own writing and Kleist’s artwork all serve to give a perspective only comics can offer. 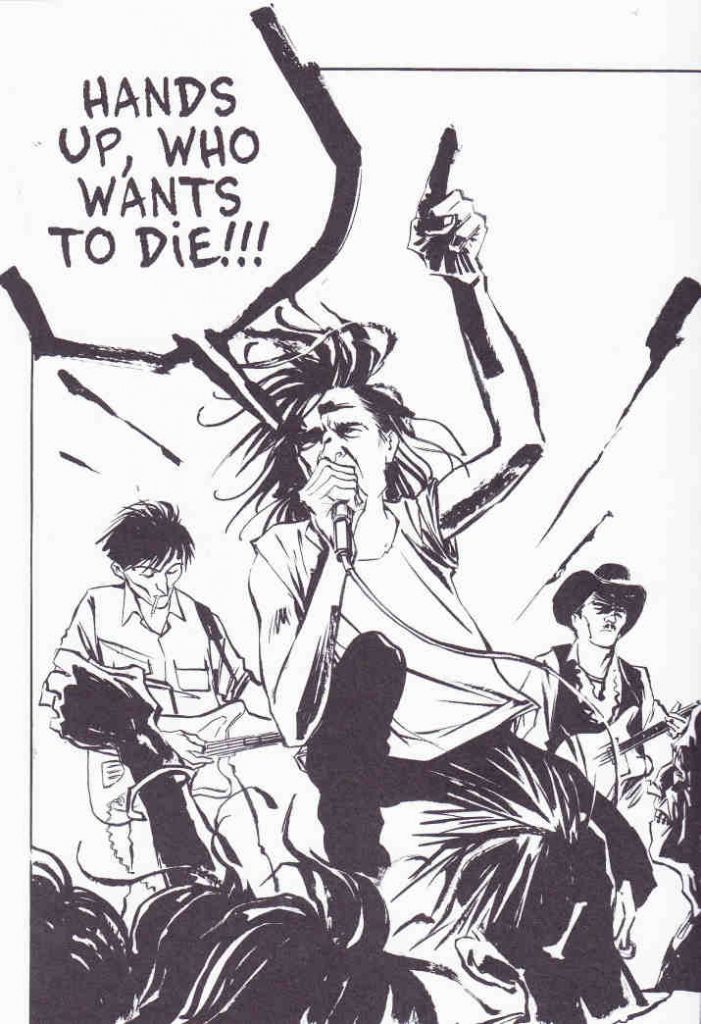 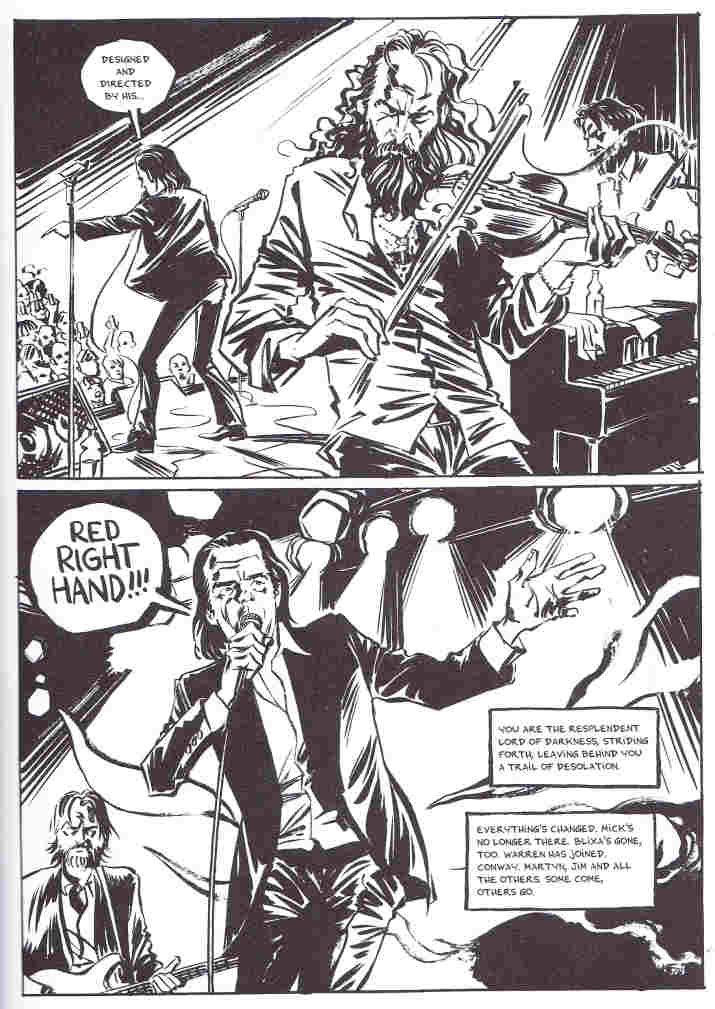 The insights into parts of Cave’s life we see here intertwine with his work – his music and his writing and even nods to film work like 20,000 Days on Earth. It’s rarely easy to separate an artist from their work, and when it is an artist like Cave, that’s even more true: Kleist doesn’t even try, he understands that both his normal life (if there is such a thing, especially for Cave) and his art and his creative process are all blended at the molecular level, symbiotic, each a part of and informing the other. And so instead with references to his songs, his novels and more and moments from his life against those lyrics – or sometimes the life as part of those lyrics – give us a flavour of the man and his art. This isn’t a chronological exposition of a man’s life and career, it’s more of an attempt to allow us to experience some of his creative process.

There are so many wonderful touches here, Kleist’s art creating many different versions of Cave – not just the obvious ones of younger Cave, older Cave, but the fictional Cave, or the semi-fictional, or perhaps sometimes the totally imaginary, the real man and the avatars from his music and writing blending, interacting. The art goes from depicting the everyday reality – a cold, winter street in Berlin or London, a dive bar in a small Aussie town – to flights of creative imagination, scenes from his songs, or characters from his books and lyrics not just coming to life, but talking to Cave, to their creator, asking why he does what he does to his creations. There are simple but highly effective moments, such as being picked up by his love, Anita, perhaps the only one who can reach him, from an addiction clinic, the back seat of the taxi growing wider between them from panel to panel in a move that visually recalls Citizen Kane’s breakfast table scene, or Cave lost in space, sending a message back to home.

“If you wrote a song about us, now, would it be a love song?” 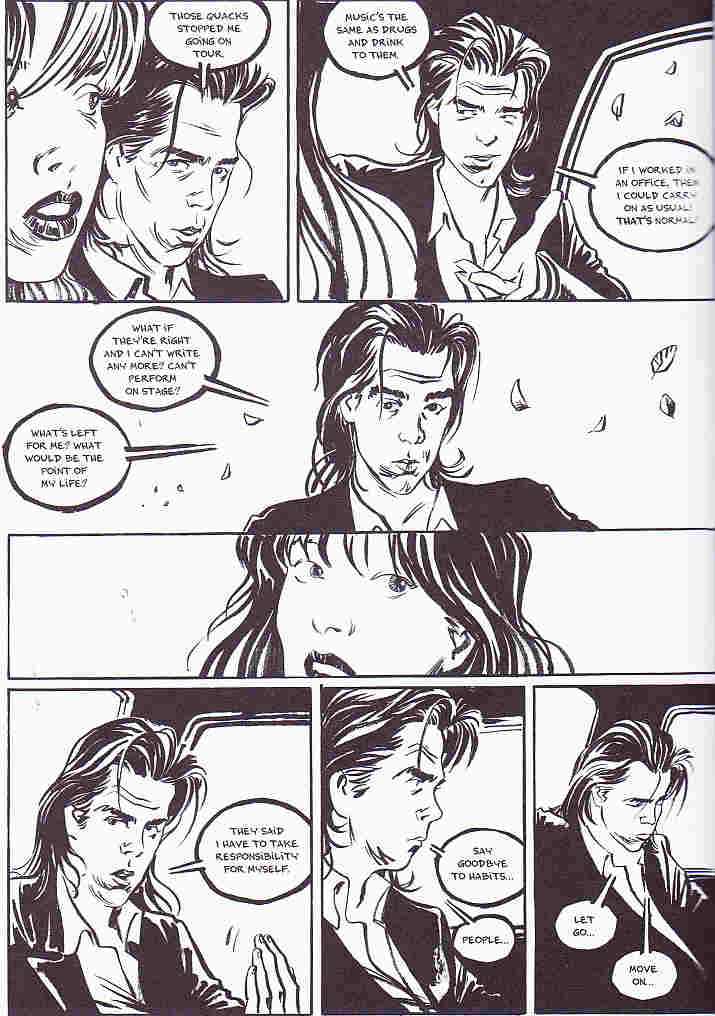 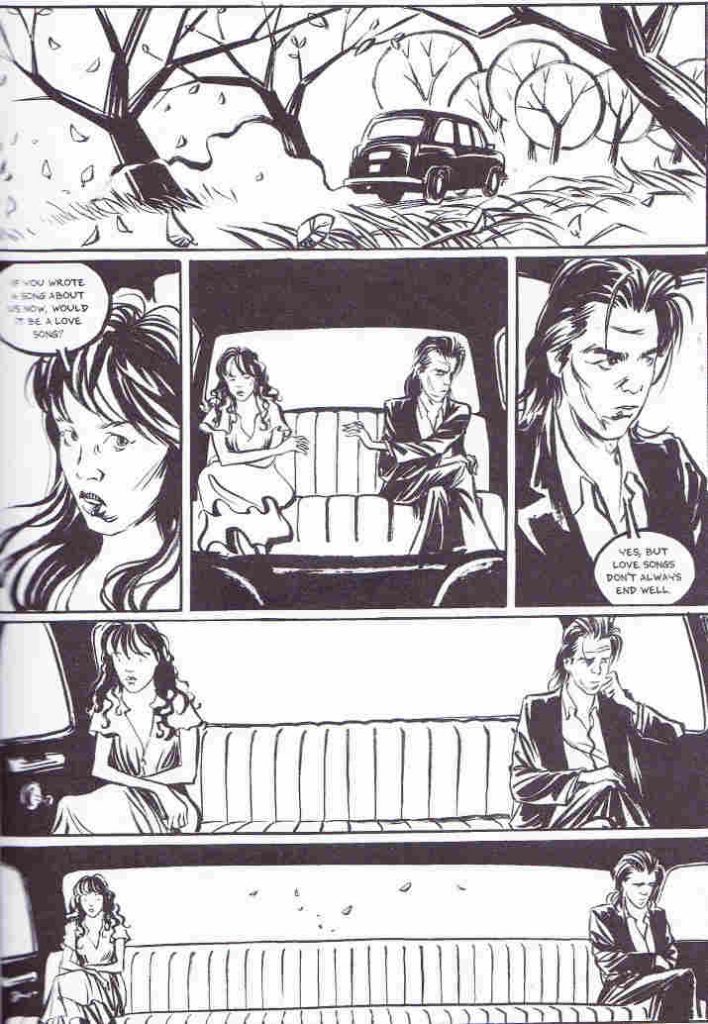 Throughout it all is a sense of struggling, right from the childhood in a stultifying, boring, buttoned-down small town and the desperate, angry desire – need, really – to push against the norm, to kick it up, to change things, to evolve, mixed with frustration with himself at perceived lack of ability and direction and those around them (often in very self-destructive ways). During his time in Berlin – the Cold War, West Berlin, still divided – a musician friend tells him “if the wall wan’t there, then West Berlin would be as boring as the rest of West Germany.” It’s a remote island surrounded by a savage sea, the first to be overcome should the worst happen, and yet sometimes the edge of the volcano is where some kinds of artists need to dance, they need that sense of danger and urgency, they draw on that energy and channel. Kleist brings all of this over superbly. 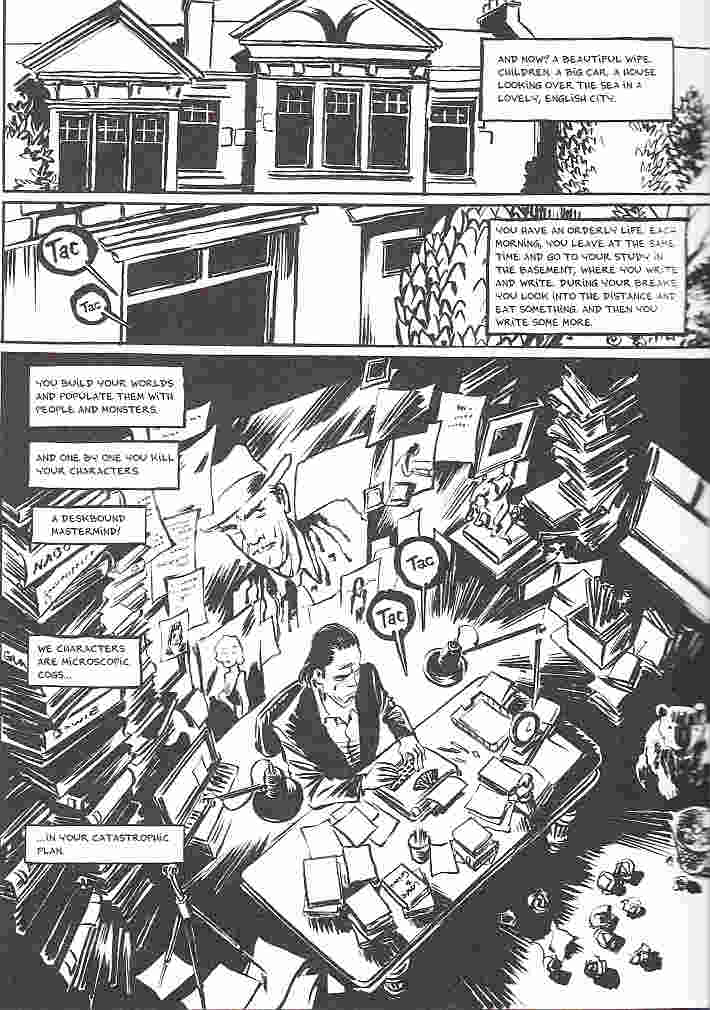 This is a book I honestly can’t totally get over in terms of a review, this is, like Cave’s music, something that you can only explain so far, the rest, it just has to be experienced. Stick your best of Nick Cave and the Bad Seeds on the stereo, then sit back and let yourself sink into this headtrip into the creative being of one of our most unique artists. This one will be going straight onto my Best of the Year list come December…