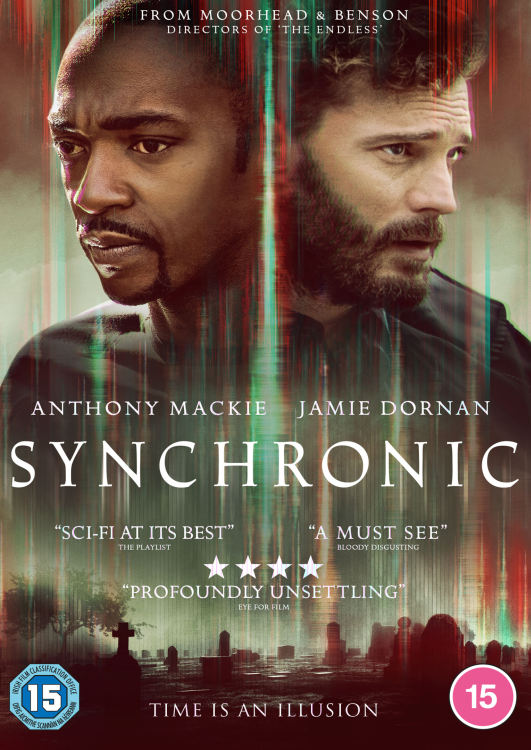 “The clock just keeps ticking down, and the lower that number gets, you realise how fucking amazing now is. The present is a miracle, bro.”

Steve Denube (Mackie) and Dennis Dannelly (Dornan) are best friends, who also work together as paramedics on the night shift in New Orleans. As with ambulance crews in any city, they’ve seen pretty much everything in their time, but Steve starts to become intrigued by a number of very unusual injuries and deaths they are called to, in which the only link he can see is that a new synthetic street drug called Synchronic was taken by those involved. The NOPD don’t appear to be following this as a lead however, as the drug itself is not the cause of injury or death. At least not directly – we soon learn that Synchronic has an unplanned for side-effect, regarding a person’s place in the space-time continuum…

The two men, despite being lifelong friends, are, in the best traditions of cinematic buddy bromances, quite different in many ways. Dennis has long since settled down, has a wife, a now almost adult daughter and a newly arrived baby. Steve, in contrast, is still single, living the bachelor life with a different woman on different nights but no actual lasting relationships (save with his dog). We see flashbacks to a traumatic scene in his life, terrible rains and flooding, causing the coffins to break loose from the above-ground cemeteries New Orleans is so famous for – it doesn’t take much to guess this is the aftermath of the terrible damage inflicted by Hurricane Katrina on the Big Easy, a wound on both the city and on Steve’s emotional state.

(Minor potential spoiler warnings ahead). Steve starts to re-evaluate his freewheeling lifestyle, not just because he is now approaching forty, but because two major events happen: first Dennis’s daughter Brianna (Ally Ioannides) goes missing (in fact she had been at a party their ambulance was called out to in order to deal with drug overdoses), then shortly after his headaches are diagnosed not as regular hangovers from his lifestyle, but a tumour in his pineal gland. Inoperable. He may have years but more likely only months.

He also discovers that his pineal gland is still in the same state of flux of a teenager, not an adult, and a chance encounter with the chemist who designed Synchronic lets him know that the drug’s time-shifting ability only works on younger brains. Convinced that the missing Brianna took Synchronic and that the reason they cannot find her is because it has taken her into the past, where she has become trapped, Steve decides, without telling anyone, to experiment with the drug. He tries taking it but documents his experiences with a video camera; he does seem to be transported for a few moments to an earlier time in the same location. Is this real or only in his perception as the drug influences him? If it is real, how can he fine-tune it to find where the drug could have transported Brianna? Even if he can do this, can he bring her back?

There is something endlessly fascinating about time-travel stories; our experience of the passing of the years is both objective (we know it is passing, we can measure it, document it) but also simultaneously subjective (was that really ten years ago? How could it be?), and although we can remember the past and imagine the future, we’re forever trapped within the flow of the river of time, unable to change courses. Synchronic offers up something a little different on the time-travel sub-genre, and it is an intriguing notion, that a drug could break us even momentarily from the normal flow.

The film is beautifully shot – many of the scenes are night shots of Steve and Dennis on their paramedic duties through the street of New Orleans, and these look superb on the screen. The film makes good use of flashbacks, which dovetail nicely into the fractured chronology as the Synchronic starts to affect Steve’s perception of time’s flow. The fact it moves him only in time but not place is also interesting, and the movie nods to the fact that some periods in the Deep South are not ones in which it is a nice place to be an African-American, a nice nod to America’s long-running race problems without being too heavy handed.

The relationships between Steve and Dennis are well-handled too – Mackie and Dornan produce terrific performances, these feel like two old buddies who have grown up together through all the years have laid upon them, and yet they stick together, trying to look out for one another. Steve doesn’t want to tell his best friend about his illness while he is searching for his missing daughter, his friend of course is angry because he wants to support him. And Steve’s quest to try to help find Brianna in the only way he can, to do something with the time he has left, something important, feels natural, in that way that life-changing moments such as serious illness or the loss of someone can be, to make you re-evaluate what is important in life (hence his quote at the start of this review).

The time-travel aspect is fascinating, especially the way it meshes with Steve’s personal flashbacks, and some aspects of time travel are well-handled (a wordless encounter with an Ice Age human ancestor showing a human link across millennia, an observation that nostalgia is nonsense and the past was often a cruel place for people to live). Ultimately, however, Synchronic is more about the importance of the people in our lives, about emotions, family and love, the vital beauty of the moments of the here and now we are given. A fascinating, emotionally rewarding slice of Indy Science Fiction film.

Synchronic is released by Signature Entertainment on digital platforms from March 29th, and on DVD and Blu-Ray from April 5th.

My mate Ken forwarded this to me:

President Bush Sells Louisiana Back to the FrenchPresident Bush and a giddy Jacques Chirac shake hands on the deal. BATON ROUGE, LA. – The White House announced today that President Bush has successfully sold the state of Louisiana back to the French at more than double its original selling price of $11,250,000. “This is a bold step forward for America,” said Bush. “And America will be stronger and better as a result. I stand here today in unity with French Prime Minister Jack Sharaq, who was so kind to accept my offer of Louisiana in exchange for 25 million dollars cash.”

The state, ravaged by Hurricane Katrina, will cost hundreds of billions of dollars to rebuild. “Jack understands full well that this one’s a ‘fixer upper,’” said Bush. “He and the French people are quite prepared to pump out all that water, and make Louisiana a decent place to live again. And they’ve got a lot of work to do. But Jack’s assured me, if it’s not right, they’re going to fix it.”The move has been met with incredulity from the beleaguered residents of Louisiana.

However, President Bush’s decision has been widely lauded by Republicans. “This is an unexpected but brilliant move by the President,” said Senate Majority Leader Bill Frist. “Instead of spending billions and billions, and billions of dollars rebuilding the state of Louisiana, we’ve just made 25 million dollars in pure profit.”“This is indeed a smart move,” commented Fox News analyst Brit Hume. “Not only have we stopped the flooding in our own budget, we’ve made money on the deal. Plus, when the god-awful French are done fixing it up, we can easily invade and take it back again.”The money gained from ‘T’he Louisiana Refund’ is expected to be immediately pumped into the rebuilding of Iraq.

Which kind of reminded me of something that hopped into my mind while singing in the shower this morning (well, the shower radio needs new batteries). To be sung to the tune of American Pie:

“Well, it’s bye bye to being high and dry,
Tried to plug the levee with my Chevy but the tide was too high,
And good ole’ George was on TV in a tie,
Said please help us, Mr President, but he didn’t even try…”

And please don’t write in telling me I’m a sick puppy. For starters we all know that already and secondly I’m not having a go at the poor souls in New Orleans, but sometimes events are so bad you just need to be able to make the odd joke about them.