And since its Bastille Day, another French-themed post, methinks, this is a pop video from Emily Loizeau who I’ve been getting into recently, most of her tracks are in French, with a handful in English, most enjoyable.

Rather like this video track of a French pop track by Emilie Simon, found by following a suggested link on YouTube while looking at some Dave McKean animations (on which note, we’ve got a major Dave McKean interview in the works for the Forbidden Planet blog in the near future to look forward to):

One of my favourite musicians, Scottish virtuoso and solo percussionist Evelyn Glennie, will be at the Edinburgh Filmhouse for a return visit to coincide with a screening of the documentary about her, Touch the Sound. For Evelyn the title is highly approriate – she started to lose her hearing when she was a young girl and yet still continued to learn music, attend music college after leaving school then blaze an internationally successful career as a solo percussionist, a role in music that’s all but unheard of. She feels the music, the vibrations of the instruments, the feel of the material and she creates an astonishingly diverse musical world from this very physical method of listening and playing (she’s very physical on stage, I’ve seen her live several times and she’s a dynamo) from classical to folk to jazz to improv music played right on the street.

I saw this documentary a few years back at the Edinburgh International Film Festival and it was an incredible experience, touching, moving, inspiring, as music (or any real art) should be. Afterwards, in front of a sold out audience Evelyn came on with the director for a Q&A session (always one of the pleasures of Film Fest screenings, that often some of those involved will be there for a talk before or after the movie). Then one of the simplest of instruments was produced, a snare drum. The lights went back down in the cinema except for an uplighter shining up through the clear skin of the snare to Evelyn standing over it and this amazing woman improvised an incredible musical set using just a pair of sticks and a snare drum. Watching and listening to her it strikes you that sometimes some people were just born to do something, regardless of obstacles placed in their way, such as deafness; her music is inside and no lack of hearing can touch that. The screening is on Tuesday at 6 with Evelyn on hand, if you haven’t seen it I encourage you to experience it.

One of my favourite pieces of classical music, some of Bach’s beautiful cello work performed by YoYo Ma:

Via Boing Boing a link to a great Billie Holiday rendition of the haunting Strange Fruit. First time I ever heard this song was back in the early 80s, being covered on a Souixsie and the Banshees album and back then I was too young to realise it has been around for decades. I’ve heard it by different artists numerous times (not uncommon in some films and documentaries dealing with the Deep South of the USA and racial prejudice) but I think this version by the great Ms Holiday is the best:

Arvo Pärt, one of my favourite 20th century composers and one of his more beautiful (and yet elegant and fairly simple) pieces: 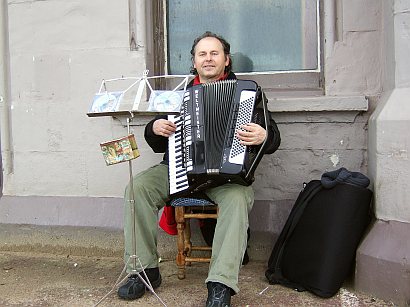 Down on Portobello beach this afternoon (a dry day!!! a day with no howling gales!!! Quick everyone outside!!!), my mate’s dog happily running around sniffing interesting smells (most animals walk about with their heads held up to see around them, except dogs, who trot around with their head pointing downwards so they can sniff everything) and as we walked along the beach we could hear music. Walking up onto the nearby esplanade we saw this chap playing the accordion, while nearby a wee boy was dancing happily to the music. It sounded like a little bit of France in the middle of Edinburgh’s seaside and put us in happy mind of our trip to Paris coming up in a few weeks. I imagine in Paris accordion players busking must be a bit like bagpipers in Edinburgh.

Checking YouTube for something completely unrelated I stumbled across this decent quality clip of one of my favourite musicians, the Scottish solo percussionist Dame Evelyn Glennie. I’ve loved Evelyn’s work for years; being a solo percussionist was pretty remarkable in the classical world, being a woman who chose to forge a path as a solo percussionist even more so, but being a deaf woman who carves out an international career as a highly respected musician is just astonishing. I’ve been lucky enough to hear Evelyn perform live several times and she is a powerhouse on the stage, utterly immersed in her music; the notes she cannot hear she feels.

This clip is from the documentary Touch the Sound, which I saw at the Edinburgh International Film Festival a few years back and at which Evelyn surprised the audience by appearing during the director’s Q&A and giving us an impromptu performance, just her alone with a snare drum, in the dark a single light shining up through the skin of the drum as she stood on the Filmhouse stage and utterly transported a rapt audience. I came out of the cinema into a bright summer day, a head full of music; that was one of those days where I floated home feeling the world was wonderful sometimes.