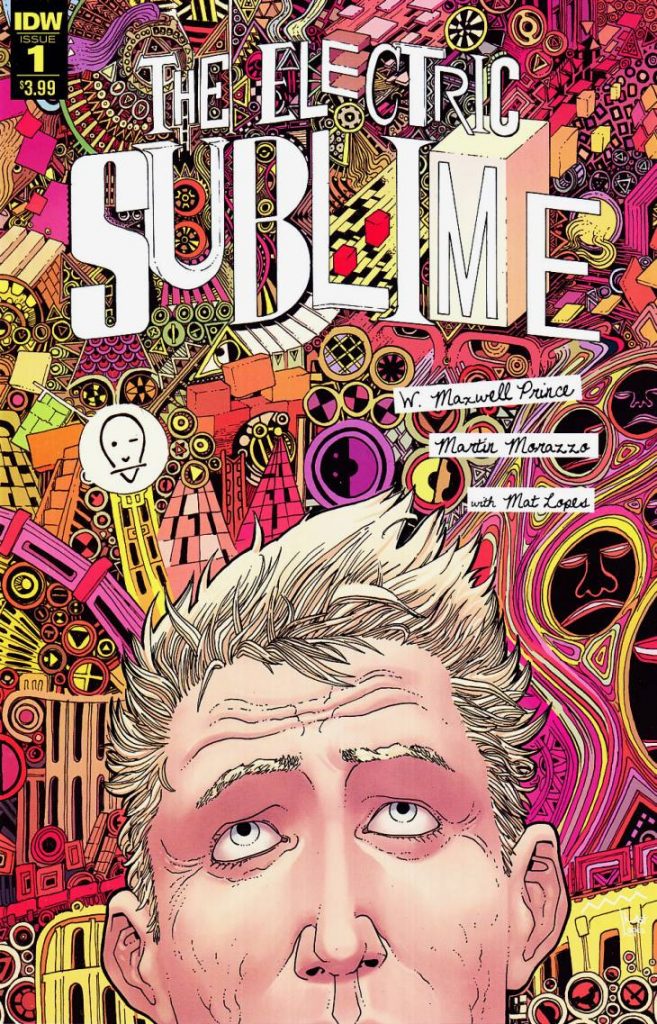 I really enjoyed W Maxwell Prince’s unusual, thoughtful and intriguing Judas: the Last Days back in early 2015 (reviewed here), and Morazzo I was familiar with from the fascinating Great Pacific (first volume reviewed here), so I’ve been looking forward to this. We open with a guide conducting a tour through the Louvre in Paris, leading them towards that great museum and gallery’s crowning glory, La Jaconde – da Vinci’s Mona Lisa, and vainly trying to persuade the flocks of tourists to put away their cameras and phones and instead actually look at all this art with their eyes, and, please, no flash photography, it isn’t good for the art (a long-lost war, I fear, tourists from every nation stand right in front of priceless paintings flashing away without a care in their heads, sadly). 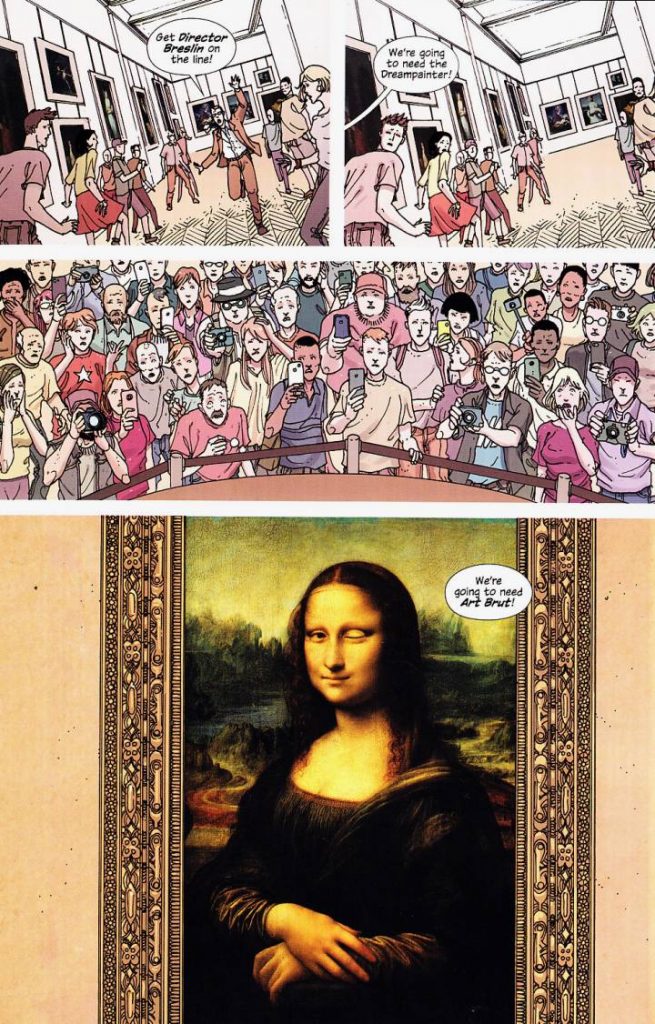 But their tour ends abruptly – something is wrong, very, very wrong. La Joconde still has her enigmatic smile on her small painting (it’s remarkable when you see it in person just how small this most famous artwork actually is), but now, somehow, she is winking at her admirers. The art guide runs, shocked, from the scene shouting “we’re going to need the Dreampainter! We’re going to need Art Brut!” The latter turns out to be an actual painter – in an asylum – called Arthur Brut, a nice little bit of word-play on an artistic term. Director Margot Breslin of the Bureau of Artistic Integrity has come to see this strange man, “dreampainting” in his padded cell. On various medications and art therapy, he seems to be out of touch with reality, mind warped by artistic excesses, unanchored in the real world, drifting, sifting, exploring the imaginary (some especially nice touches by Morazzo here, the way the asylum is almost monochrome, the colours so subdued, except for the vibrant art Brut is creating). 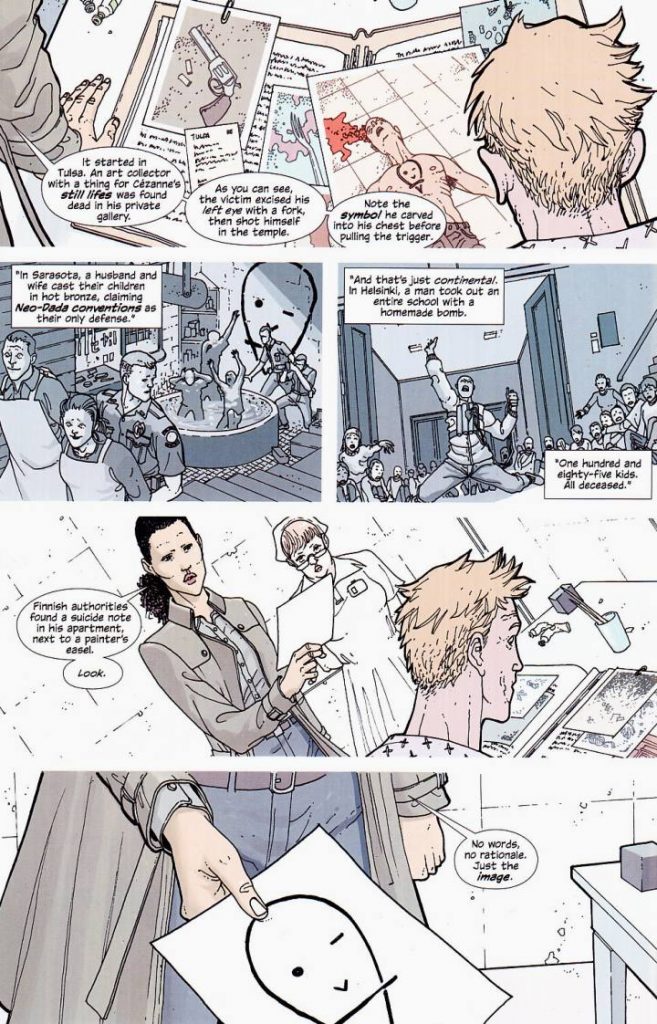 But Breslin is desperate and even this seemingly wrecked psyche could be of some help, he may, in his fractured, kaleidoscope lensed view of the world have more understanding of what is going on than her team. Because it isn’t just that the most famous painting in history has suddenly, inexplicably altered to depict a winking Mona Lisa, there have been numerous other incidents around the entire globe, suicides, bombings, in one memorably horrific incident a couple who cast their own children in bronze, literally, killing them as well as transforming them into art, “claiming Neo-Dada conventions as their only defence.” And in each case a very simple image was found, the same image at each scene, in different nations, continents, a very simple line drawing of a human face, winking… Meanwhile we are also introduced to a young woman with a troubled child, Dylan, taking him to a new therapy home where art is used to help youngsters with mental health issues. There may be a connection growing here to what is happening in the wider world.

I really don’t want to say too much more about this first issue because I’m trying to tapdance around any potential spoiler landmines. And also because this is one of those stories that while I can summarise it a bit for review purposes to give you a rough idea, it is only the very roughest, this is really one of those works that you simply need to experience. It is only a first issue, so we’re only getting the briefest glimpse into what promises to be an unusual tale, but already it is pretty darned compelling – the idea of taking notions of what constitutes art, how we make it, how we react to it, the power it has, are all fascinating (as is the idea of using an artform – here the comic – to explore other ideas of art), and it reminded me in the good way of Doom Patrol-era Grant Morrison. Art has always been connected with ideas of power and even magic – even our oldest artworks, cave paintings some thirty to forty millennia old evoke not just our visual senses and our emotional states, they whisper of magic, of somehow capturing and conveying the power or essence of something else. And there’s also the sense of life within some art, or sometimes whole vistas of alternative realities. 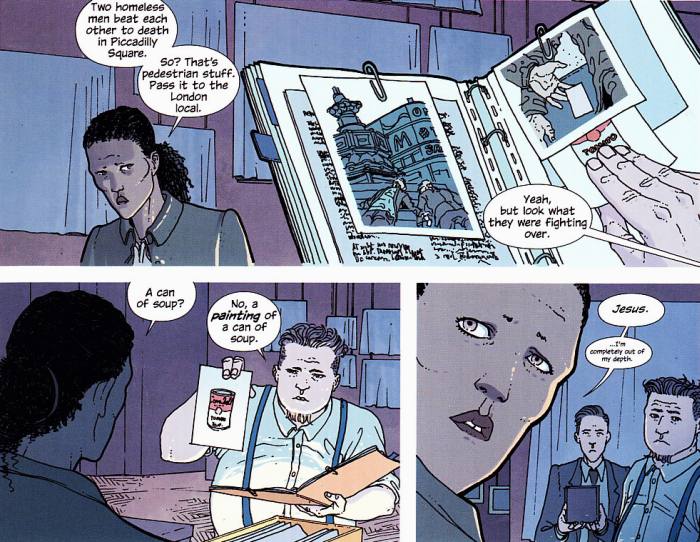 It is strange how sometimes the universe throws up variations on closely related themes around the same time, occasionally. In recent months I’ve been reading Shaun Simon and Mike Allred’s Art Ops for Vertigo (first issue reviewed here), and just in the last few days I have been lucky enough to be reading an advance copy of China Mieville’s next novel, The Last Days of Paris (out from Picador in February, James and I will be doing a joint review/discussion of it in the near future), in which resistance fighters in occupied Paris also interact with and use Surrealist art manifested into the real world in the desperate fight, the Surrealist art and manifesto being invoked like magical summonings almost. And then this first issue of Electric Sublime arrived on my desk… Of course all three would have been created by those different creators around the same time, without knowledge of the others, and by coincidence they would appear within a year or so of one another. Perhaps the art world is tapping on our window and trying to tell us something… 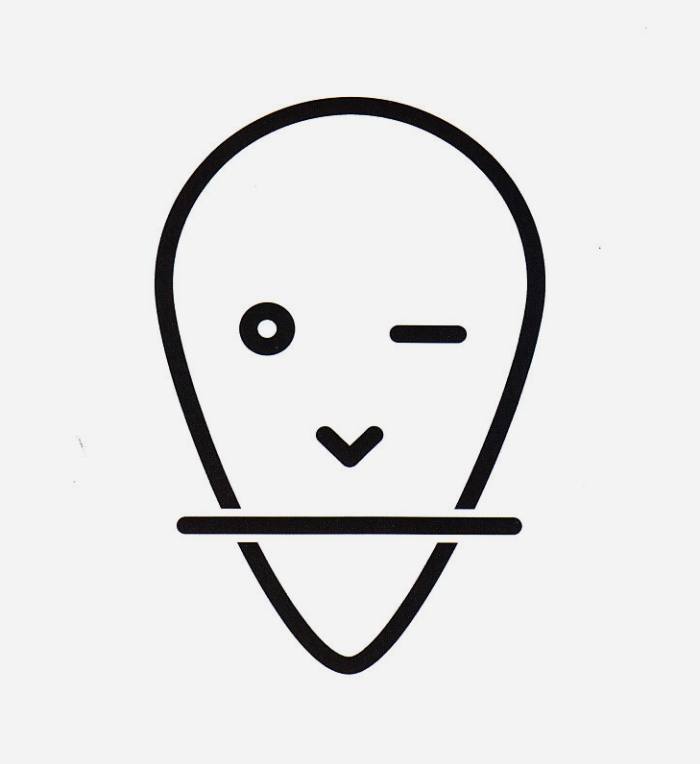