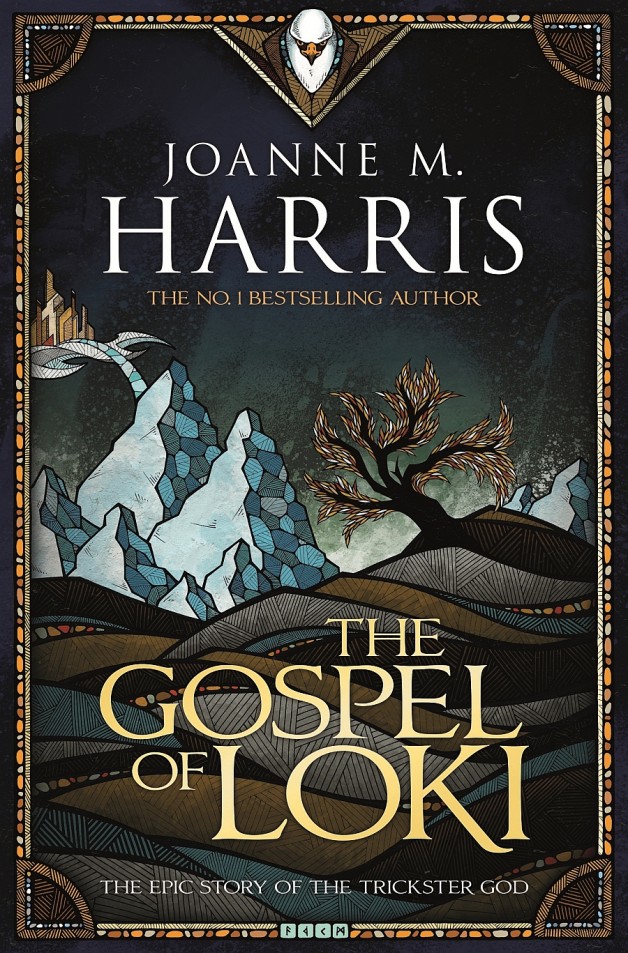 Ah, Loki, for millennia known as the Trickster of the gods. Not the mightiest, not the wisest, not the most heroic or noble. Nor is he one of the Aesir, the deities lead by one-eyed Odin, the Allfather, or the Vanir, the other early gods Odin managed to bring into his fold (or bribed, cajoled or tricked into partnership, depending on which version of the Norse sagas and myths you read – Loki is not the only one capable of cunning and trickery…). He’s the schemer, the inventive trickster, impetuous and although invited into Asgard as Odin’s sworn blood-brother he knows and the other gods know (and he knows they know and is acutely aware of it) that he’s simply not one of them. And it rankles and festers inside him, driving him to various plots to undermine some of the gods, to settle scores and slights, which, of course, gets him into more trouble, makes him more distrusted, which in turn makes him even more irritated with his situation and so he thinks up more plans to trip them up…

…And you can see how that’s a situation that pretty much powers itself on upwards, forever escalating and you know it’s not going to end well, not for anyone, Loki included. And if you couldn’t guess that this endless spiral would lead to disaster (and you had no familiarity with the Norse legends) you would still know, because Loki tells you as you go along. This is his story, some of the great tales of Norse myth retold by Harris but from the perspective of the god who most often gets the blame for everything which goes wrong, by the other gods, by the Folk (humans), the Rock People, the dwarves… Well, pretty much everyone in creation. And he’s not happy with this situation, so this is his version of events, his justification for why he did what he did, how it all went down (as he sees it, anyway), from his first meeting with Odin to the slippery road that leads to Rangarok and the end of Worlds.

If you have read some of the great Norse myths, many rather handily preserved by Icelander’s centuries-long love of practising their calligraphy and vocabulary by painstakingly copying the sagas so even when original fragments have been lost there have been copies to maintain the stories, then you will recognise many of the tales Harris weaves into The Gospel of Loki. There’s the stealing of Sif’s beautiful tresses after a bit of hanky panky, which doesn’t exactly make her husband Thor very happy (and it doesn’t take much to get Thor roused to violent behaviour), leading Loki on a mission to the dwarves, those underground dwelling (and rather ugly) masters of the forge and crafts to flatter and cajole them into creating a temporary replacement for Sif’s hair, created from incredibly detailed, jointed strips of gold, woven with runes so it becomes like her hair and grows with it as it returns. To sweeten things after his faux-pas he also manages to make the dwarves create some other artefacts, all run-inscribed, magical devices (such as Odin’s spear) but being Loki he can’t stop there and it isn’t long before, blinded with the idea of more magical gifts, he schemes to get rival dwarves to try and outdo the others for craftsmanship (part of which leads to the forging on Mjolnir, the fabled battle-hammer of Thor) and, of course, he gets himself tied into knots with his head literally on the line…

Many of these tales from the myths occur in The Gospel of Loki, but now from the perspective of Loki, casting a different light on events even if you are fairly familiar with the original tales already, and if you aren’t then they function as a very accessible (and highly enjoyable) introduction for modern readers to some of the great myths and legends of Norse culture (also if you aren’t familiar with them I’d recommend following this with a read of The Prose Edda – there’s a lovely recent Penguin Classics edition which is a perfect primer). In lesser hands that’s what this might have been – a version of the great tales told in a way modern readers would find more palatable, and really that would still have been an interesting read. But Harris is too good to simply do that, she breathes life into all of the characters, from Chaos incarnate to dwarves to gods in a way that the sagas often don’t – the sagas spin great yarns but this is a novel and Harris takes those tales as a framework then fleshes out her characters and makes them, well, more human (sorry, gods of Asgard, it’s just a phrase), which gives another dimension to the events. Telling a great epic of the gods and heroes is fine (and has historically been one the drivers of the human urge for storytelling) but a novel lets you experience not just the big events but to get inside the characters, and that means some emotional investment, as well as perhaps framing those ancient stories in a way more suitable for some modern readers (a trick Ashok Banker also handled well with his Ramayana cycle).

And that, in turn, means you’re much more emotionally involved as the various events push ever forward to the seemingly inevitable ending of Ragnarok, twilight of the gods, Wagner playing in the background (metaphorically) as the Bi-frost crumbles, the walls of Asgard shatter and the gods fall in a final battle as the great wolf eats the sun and the moon; the end of the Worlds… Everything which begins has an ending, and in myths from many lands that doom is usually long foretold and seemingly inevitable, no matter how the gods and heroes may struggle to deflect fate. And is it all truly inevitable? Are prophecies always going to come to pass, or does the knowledge of the future – or a possible future – shape events, leading to decisions which will eventually lead to the conditions that bring prophecies to reality? Are they in effect self-fulfilling? And how much can you trust prophecies which come from a disembodied head kept in a well (separation of Mimir’s head from his body caused by one of Odin’s schemes, so really, as Loki says, should you trust him? Actually Loki says you should never trust an oracle, but then throughout there are many people Loki says you should never trust…). There’s a school of thought that argues Norse storytellers were well aware of Classical tales and that these influence some elements of the Norse tales, and if you’ve read any Classical Greek tales involving oracles you’ll doubtless see echoes of how double edged future knowledge can be, even to a god.

Loki himself is, appropriately enough given this is his tale, the most vibrantly realised of the characters here, and Harris has him down to a T; cheeky, quick to take offence, just as swift to plot some revenge scheme which will dig him even further into trouble, then take further umbrage at being vilified for his misdeeds (even when he knows he did actually do that naughty thing, he resents being blamed for it), never taking responsibility for his actions (just look at his monstrous children he pays little attention to after his dalliances, who will eventually play major roles in Ragnarok), always blaming others for his own faults (although in his defence, as he points out, he is Wildfire, born of Chaos, and Odin knew that when he brought him into Asgard. It is his nature, after all). But he’s also charming, quick-witted, silver-tongued, funny and frankly it’s hard to dislike him even when he is cooking up another revenge scheme or even plotting the downfall of Asgard.

And it isn’t as if Loki is the only one with selfish motiviations or who find using others for his own schemes comes to easily to him – it’s quite clear throughout that the other gods are just as shifty and duplicitous, happy to bask in glory (earned or otherwise), to take tribute from others, worship from the Folk, to lay out their own long-term plans that involve manipulating others (not least Odin, a crafty old bugger if ever there was, and quite ruthless). The difference is Loki know this is his character, it is his very nature as Wildfire, but he never really pretends to be anything else, while the gods like to present a veneer of honour over all their deeds. Never trust a god, as Loki would no doubt comment – you don’t get to be a god, especially the top god, the Allfather, without being a sneaky, ruthless character…

(Joanne Harris signing copies of the Gospel of Loki after a reading in Blackwell’s, Edinburgh)

It’s not all sneaking and subterfuge and plots within plots though – there are moment, just a few here and there, where briefly Loki feels content. A fishing trip with Odin, camping out, just the boys, drinking, travelling, hunting together away from all the god concerns for a while, he even becomes friendly, briefly, with Thor. And that makes the oncoming betrayals and Ragnarok all the more bitter, because while he plans vengeance with his dark allies (and is he using them or is he being used – in fact is everyone from gods down to chaos demons and giants all being played?) there’s that emotional barb, the moments when he did like being in shining Asgard, the fleeting moments where he and his blood brother Odin just hung out like old pals… And again its the emotional depth Harris puts into these ancient characters that takes this beyond just a great set of yarns and makes you actually care.

On her own site the author commented of the book that “It’s not quite a retelling of the Norse myths, although I have drawn extensively from them. Instead it’s more like a version of Rosencrantz and Guildenstern are Dead, in which Stoppard takes the story of Hamlet and retells it from behind the scenes, from another point of view,” and I think that’s also a good way of looking at this different perspective on some classic myths. Loki has been busy popping up in different media in the last few years – most obviously in the big-budget splendour of the Thor and Avengers movies, but he’s also been reborn in the Marvel comics and been brought to rather selfish and nasty life in the excellent Kiwi fantasy series The Almighty Johnsons. And here is that lovable rogue again grabbing a slice of the limelight, and again showing that actually in many ways, despite not being the most noble, strongest or wisest, he’s far more interesting than most of the other gods, and Harris gives us a Loki, full of obvious faults, but one who is never less than charming and fascinating. And, it has to be said, a hell of a lot of fun!