Now here’s a very timely seasonal treat for all the good readers (the bad ones aren’t allowed, they’re on a list and it has been checked twice): Hellboy in Krampusnacht. Actually this is a double treat as it sees HB’s creator Mike Mignola teaming up with superstar writer Adam Hughes (and I’m guessing Adam was most likely delighted to get to play in the Hellboy sandpit). The long winter nights are ideal for spook stories, and there is a long tradition of a ghost story around Christmas – just the other evening my long running SF book group enjoyed some classic M R James ghost stories for our final meeting of the year, in dark, wintry Edinburgh. And here we not only have a nice spook tale for a dark, winter night, but one with a distinctively Christmas theme but, thankfully, not the type of festive theme that lays on the sugar and heartstrings, no this is one more suited for us, thank you.

Krampus himself is an ancient piece of folklore, in latter centuries associated more as a dark partner of Saint Nicholas, but while jolly old Nick delivers presents to the good girls and boys and non-binary children of the world, Krampus punishes the wicked. As is often the case with such folklore, the origins stretch far further back, and more than likely the modern version of the last couple of centuries lifts from several earlier, pre-Christian fokloric versions. In the modern day Krampus has become better known in the Anglophone world, becoming something of a pop-cultural figure in horror and fantasy circles as a nice antidote to the artificial sweetness of much of Christmas, but his roots are much more steeped in that Mittel-Europa culture (the same that has been home to all sorts of wonderful mythic archetypes, from the vampire to the Baba Yaga), and this offering from Mike and Adam draws on that background. 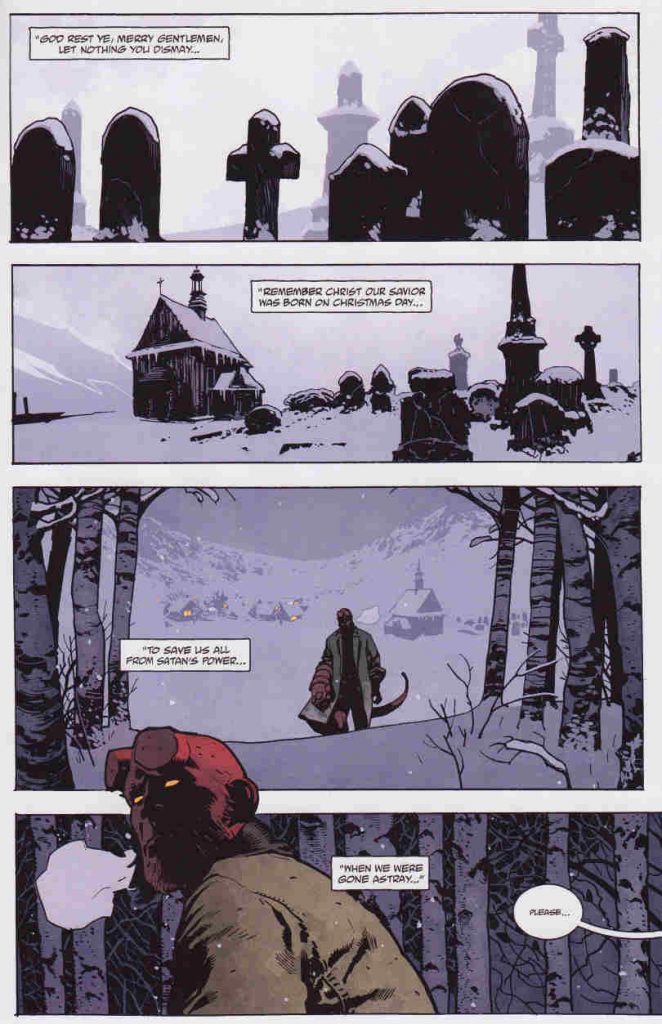 It’s 1975, and Hellboy is making his way slowly through a deeply snow-filled forest in rural Austria, when the ghost of a woman appears, and begs him to save her little boy, before vanishing, leaving only an old-fashioned, carved wooden child’s toy in the snow. Pushing further through the icy forest he sees the lights of a lonely house and on approaching, the inhabitant, an elderly man, opens the door and hails him by name – he is expected, won’t he come in for some food and drink and warm himself by the fire? Naturally it is not what it appears – the old, genial man had previously made an appearance in a local church, causing a supernatural incident, specifically to draw Hellboy’s attention, for he has something he wishes to get off his chest, and a favour to ask, something only Hellboy can do.

And I’m not going to risk spoiling this for you by going any further on the story front. But I will say I enjoyed the hell out of this, no pun intended. As you’d expect from Mignola, the story is littered with references to folklore and myth, from the mysterious, solitary house in the woods, the dangers of the dark forest, through the dead offering advice and help, to the Krampus figure himself. There are shades of Dracula too as “Herr Schulze” invites Hellboy into his lonely, isolated dwelling to take food and drink; I almost expected him to say “Welcome to my house! Enter freely. Go safely, and leave something of the happiness you bring…” Unlike the Count, however, Schulze does drink wine… 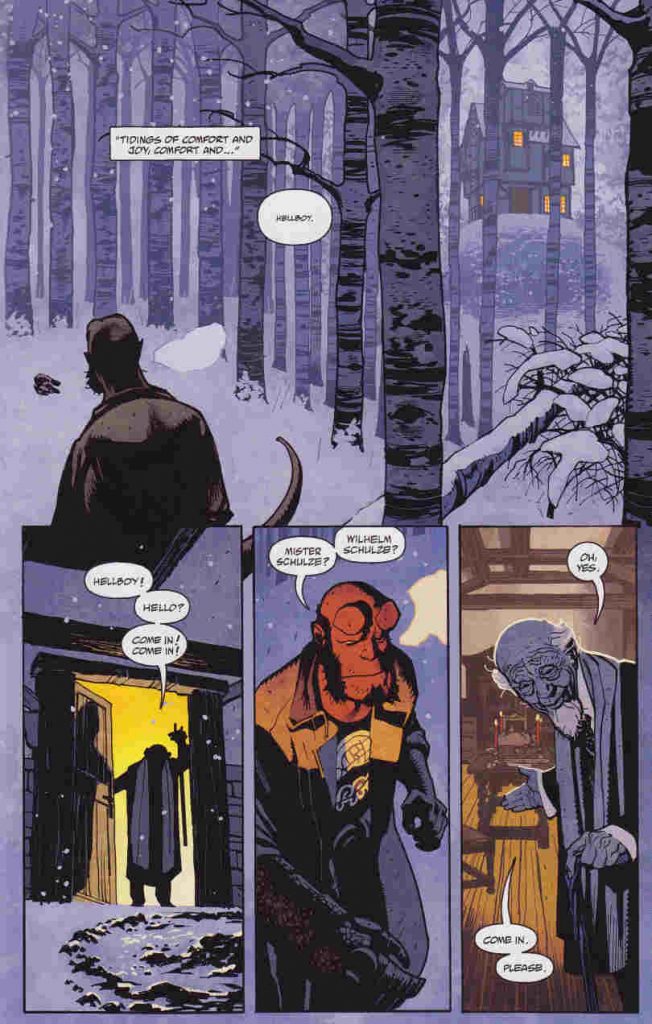 Hughes’ art creates a lovely contrast between the icy blue-white winter forest and the warm, yellow glow of the candle and fire-lit home, and you can almost imagine knocking the snow off your shoes before stepping inside. That contrast is also carried over to a lovely vingette back at the BPRD with his adoptive father and Liz, by a roaring fire, hot drink to hand and Christmas tree in the corner, again standing against the cold, blue of the winter forest (a scene which, intentionally I imagine, recalls the like of James telling his yuletide ghost stories to friends in his college chambers), with great use of colour here to convey mood and atmosphere almost as much as the art itself does. Hughes also does a grand job of deploying his own fine style but ensuring it visually fits with that iconic Mignola Hellboy imagery, which is not the easiest balance to strike, but he does so admirably. 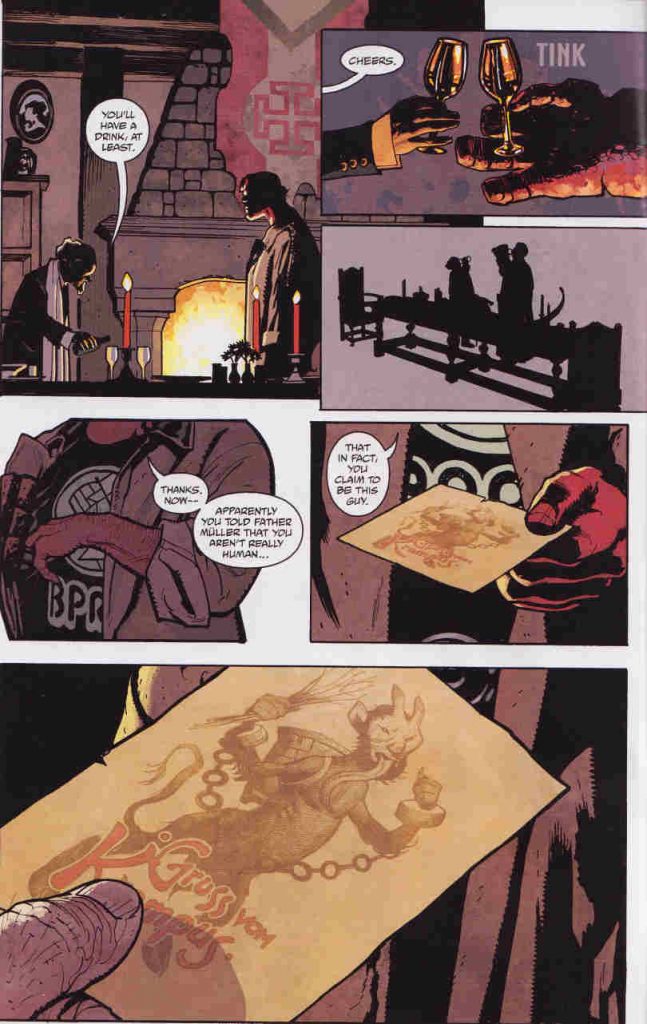 A lovely little seasonal one-off Hellboy gift to readers – do yourself a favour, take half an hour out of the frentic festive frenzy, treat yourself to a copy of Kramupsnacht and a hot chocolate or a nice mulled wine, and sit back (preferably at night, by the fire) and enjoy a good read.