Thor, the Goddess of Thunder Volume 1 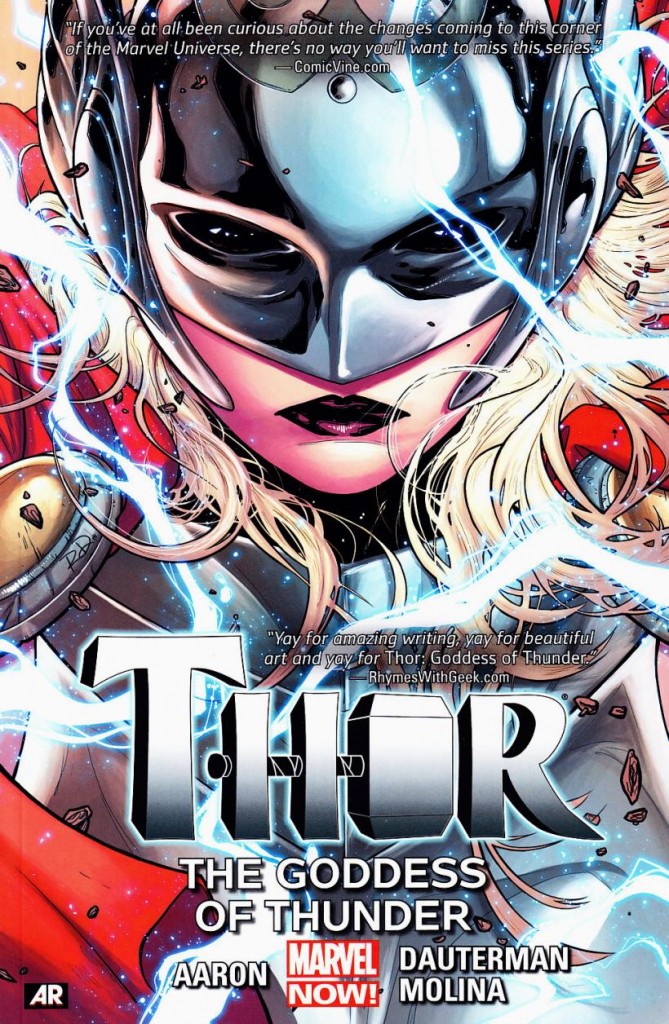 Following the events of Original Sin, Thor has been badly affected – since Nick Fury whispered a secret into his ear, a secret stolen from the Watcher, Thor has not been the same man (or god). Mjolnir, his famous hammer, lies on the surface of the Moon and no-one, not even Thor, can pick it up. The hammer decides who is worthy, and it seems the Odinson is no longer worthy to wield it with the power of Thor. Broken, devastated, he has little idea of what to do, and matters are further complicated with  the return of his father, Odin, who now assumes that his wife Freyja and the council will simply roll over and return control to his arrogant hands as if he had never been away. 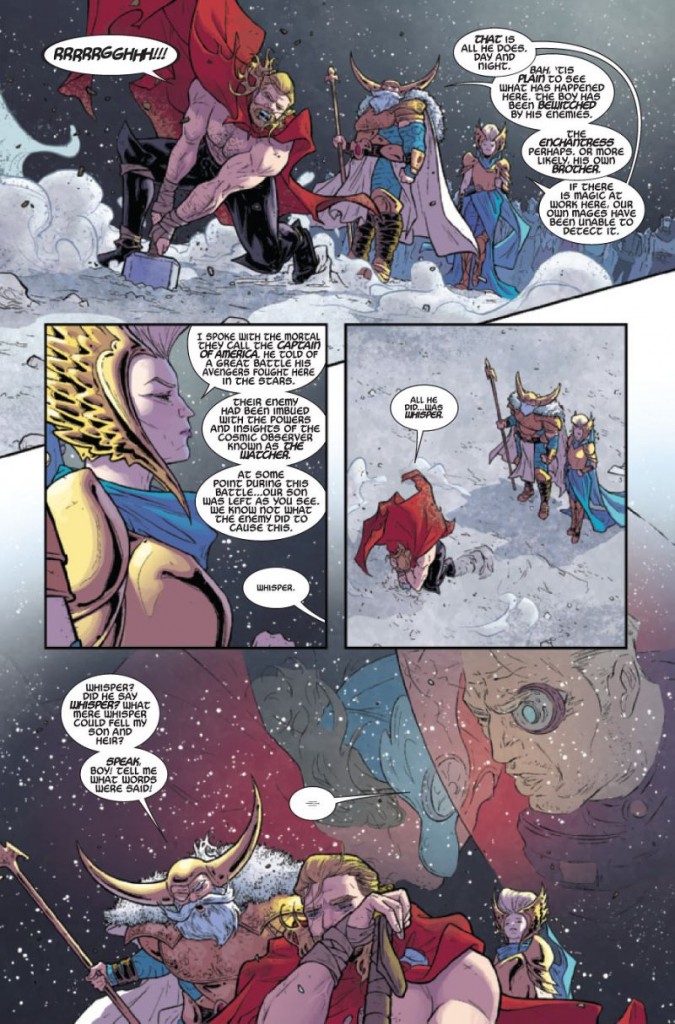 And then as the Asgardians are both weakened and in a demoralised, confused, divided state, a horrible, vicious attack by Frost Giants takes place on Earth, on a deep sea research based owned by the villainous billionaire Roxxon, with much slaughter. Odin shows no interest in defending Midgard. Thor finally snaps from his torpor by his now off-limits hammer, arms himself with a favourite axe instead and mounts his ram to fly into battle. But without Mjolnir he lacks so much of his power, and his added bitterness and anger has unbalanced him. The Frost Giants are being lead by an ally, a scheming Dark Elf who wants something Roxxon has, and who is perfectly aware of the turmoil in Asgard and that Thor no longer wields the hammer. And Thor is no match for him – he loses, and he loses badly, defeated and his bodily badly mutilated. Others try to lift the hammer – including the incredibly arrogant Odin – but none can. And then a slim woman, features concealed by a silver helmet, steps forward after the rest have gone. And she picks up Mjolnir… A hero is always needed, and if the Odinson has been judged unworthy of Mjolnir, then another must step forward to take his place, the hammer lifted, the lightning unleashed.

“There must always be a Thor.” 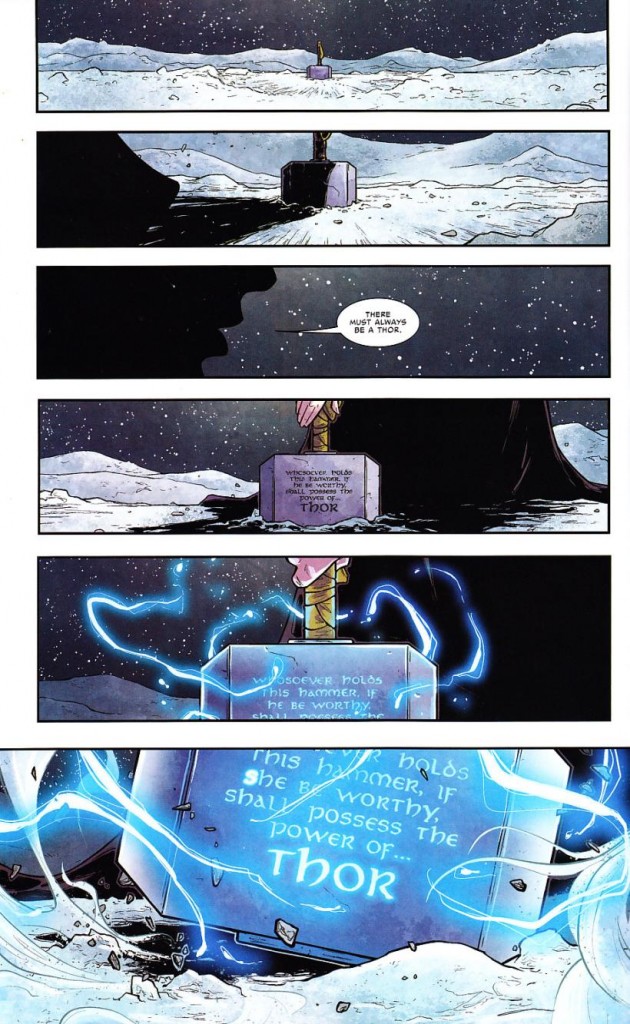 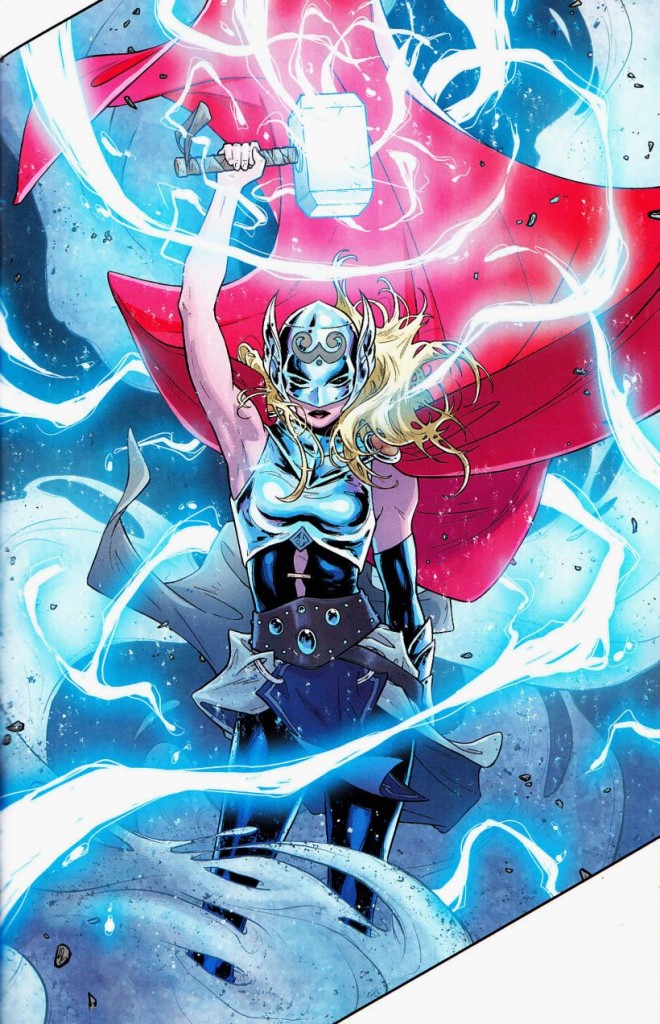 This new Thor has little time to try and come to terms with the vast power of Thor that Mjolnir imbues her with (she even finds herself speaking like Thor, “thees” and “thous”) – how does she even use it to fly? Oh yes, she’s seen Thor do that twirl it around then throw and zooommm. Hel, yes, that works! And it’s fun! Fortunately Mjolnir’s relationship with her seems to be almost symbiotic; this is no mere tool or weapon, the enchantment which allows it to judge who is worthy also seems to work with the new Thor, guiding her, helping her, it wants to help her, wants her to succeed, to be the best hero she can be. And as she arrives at the scene of the Frost Giant invasion she will need all the help she can get, literally thrown in at the deep end into a huge fight against the odds deep under the ocean. And then a partly recovered Odinson, dragged back to Asgard for treatment after his defeat, turns up. And he is not amused that someone else wears the mantle of Thor. Who is this unknown usurper? Now she has a Dark Elf, Frost Giants and and embittered, furious Odinson to deal with. Hel of a first day…

Aaron and Dauterman (with Jorge Molina on art duties for the final part) deliver one of the best Thor story arcs for ages here, giving us not one but two very powerful women who have to use their power and influence while navigating a very male-centric world, both the new female Thor and also Freyja, queen of Asgard. Often wiser and a better ruler than her arrogant husband, and also more understanding of the new Thor. The All-Father sees a thief and usurper – despite the fact Mjolnir chose her and rejected him – but Freyja sees nobility and honour in this new Thor, of a woman who has stepped up because if the Odinson can no longer be the heroic Thor then someone must be. Because Thor is needed. It’s pure, selfless heroism. And to Dauterman and Molina’s credit even when powered up by Mjolnir the new Thor doesn’t suddenly become some ridiculously proportioned uber-Amazonian caricature, she remains the same, slim woman (thank you for not going down the six foot legs, gravity-defying bosom and revealing costume route, this shows far more respect for the character and what she will need to undergo to be worthy of the mantle).

It’s a steep learning curve for this new Thor – she has to learn to control her new powers, to wield Mjolnir effectively (although the hammer seems happy to help her – in fact it does things in battle it never did even for the old Thor, much to his amazement, helping him to start realising that perhaps this woman is no thief but is truly worthy to hold it). She has Frost Giants to deal with, Dark Elves plotting with more clearly threatening to erupt on both Midgard (Earth) and Asgard at any moment. And she has to somehow convince the Odinson that she is not his enemy or an usurper. And then there are the everyday battles a superhero has to fight, including a wonderfully drawn and scripted fight with the Absorbing Man and his other half, Titania. And as well as fighting supervillains she has to fight his condescending, macho, misogynistic attitude too:

“Thor? Are you kidding me? I’m supposed to call you Thor? Damn feminists are ruining everything! You wanna be a chick super hero? Fine, who the hell cares? But get your own identity. Thor’s a dude. One of the last manly dudes still left.” 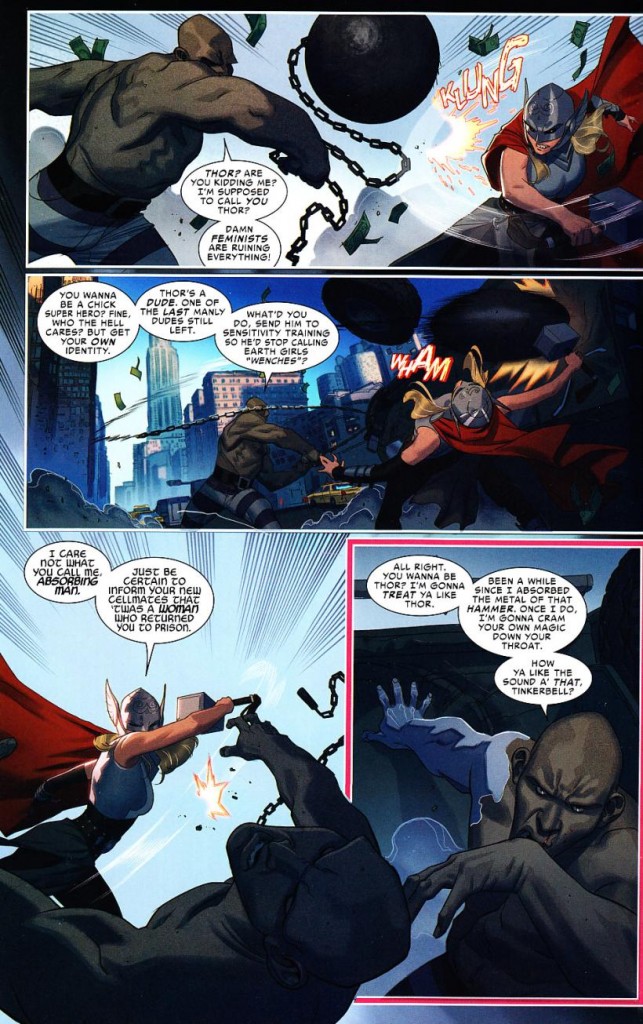 And the female Thor rather satisfyingly beats the living tar out of this chauvinist pig, using Mjolnir in a way he has never seen, making him gasp, “what kind of Thor are you?” And as she punches him in the face she replies “the kind who just broke your jaw!” while in a thought bubble we can see her also thinking “that’s for saying “feminist” like it’s a four letter word, creep.” Titania arrives to bail out her defeated husband, but decides this one time she won’t fight. Call it a superwoman to superwoman nod of respect for the sorts of attitudes they have to face. It’s a wonderful scene an it’s not hard to detect in it a rebuke, not just to sexist attitudes in general and those extra hurdles many women are forced to jump to be successful (like life isn’t plain hard enough already for anyone), but also to the well-known problem of sexism in the comics industry, among publishers, creators and some readers. More than a few male readers howled, outraged at the idea of a female Thor, as if it somehow emasculated them. Goodness knows what they’d make of the actual Norse Sagas where Thor has to dress up as a blushing bride at one point! 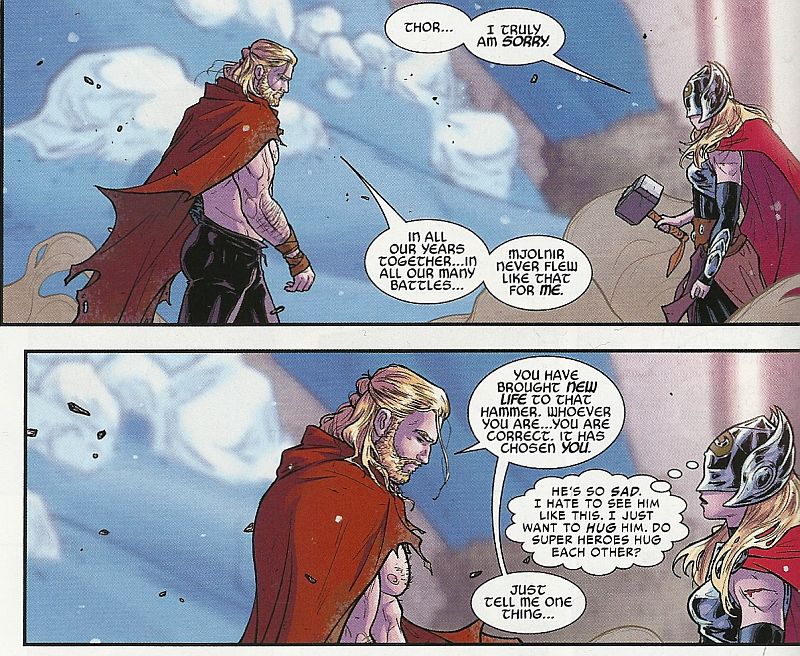 The identity of this new Thor isn’t revealed till a later volume, but it is someone we know well from the Marvel Universe and it is taking a huge toll on her, and yet she will keep doing it because in her innermost core of being she is a hero, and that hero is needed. It’s pure Joseph Campbell Hero With a Thousand Faces stuff, mining the very nature of what makes a hero, the trials, the ordeals, the sacrifices, male or female, and as such it fits the mythic-rich  idea of Thor perfectly, while the gender issues and the politicking in Asgard add more layers (often inter-related layers – would Odin be so outraged if a male hero had been chosen by Mjolnir?), upping the interest and hinting at more to come. I won’t spoil things by revealing who the new Thor is – I’m sure some of you have heard already, but for those coming fresh to this new chapter in Thor’s life I’d rather let you find out at the pace the creators decided. Solid superhero action, strong female characters, slowly building larger story arc in the background, cracking artwork, shining heroism, mythic heroism and as bonus dealing with gender issues in a positive way, this is one of the best Marvel superhero tales going right now.