Another late evening science fiction-horror screening at the Edinburgh Film Festival and another absolute gem with this monster movie with a strong comedy undercurrent. A glowing fireball streaks across the night sky off the coast of Ireland, past a solitary nocturnal fishing boat. Mistaking the green glow for a distress flare they set off thinking someone needs helps, but it’s not another vessel they encounter…

Daybreak on a small island off the mainland and young career-girl policewoman Garda Lisa Nolan (Ruth Bradley) is arriving on the ferry, taking what she thinks should be a wee change of pace for a couple of weeks duty, swapping the hustle-bustle of a city centre Dublin copshop to provide temporary cover on the rural island while one Garda officer is on his break. The remaining officer, Ciarán O’Shea (Richard Coyle) – a constant alcoholic – is less than happy to have anyone else drafted in to keep an eye on him, let alone an eager, fresh-faced female officer from the big city, but soon they will have more important issues to deal with. The trawler has been found adrift with no crew off the coast, then a local doctor walking his dog on the beach comes across the horrific sight of an entire pod of pilot whales washed up on the beach.

Such sad sights are not unknown to coastal communities, of course but when the local marine scientist Doctor Adam Smith (Being Human’s Russell Tovey) examines them he finds huge wounds and concludes they didn’t beach themselves but died at sea and were washed in by the tide. Quite why a whole pod would be killed at sea like this no-one can say. Meanwhile one of our local drunken fishermen finds some very odd creature caught in his lobster pot. Deciding it might be worth money he hides it in his bath before, this being Ireland, he heads to the pub, gets drunk and tells everyone he has a ‘sea monster’ in the bath. Of course, no-one believes him. Until people start to go missing and there’s a storm coming that will cut off the island from any outside help, even if those on the mainland believe what they tell them…

Okay, so far I imagine for anyone who loves their SF and horror we’re on fairly familiar ground here – small, isolated rural community, an outside menace arrives, stealthily at first, picking off one or two people in the dark before anyone can notice, only being properly revealed when it seems it may be too late to protect themselves. We even have the couple of outsiders who come into the close knit community in so many tales of this kind. The pure joy of Grabbers is that the folks who made it clearly know and love the genre; they take these familiar characters and situations then play them absolutely pitch-perfectly, with a good combination of horror and humour, with the latter deriving less from any puns but evolving naturally from the interaction of the characters. 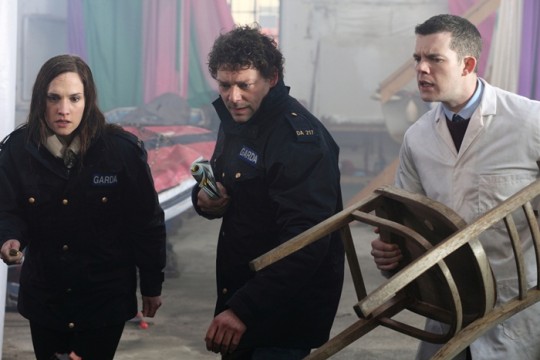 Grabbers is also proud to wear its Irishness on its sleeve and not try to Americanise itself for the international cinema market. This is a classic monster movie like many an American B flick, sure, but one that could only work in Ireland – where else (excepting perhaps parts of Scotland, perhaps!) could part of the protection against devilish, blood drinking sea monsters involve a lock in inside the village pub and getting drunk? Where else would you get a shout of “aw, shut yer fecking hole!” as a hero wallops the giant monster? A great combination of B-movie SciFi roots, horror and character driven humour, great cast and a lot of heart (plus some nice homages to other genre greats, including a brilliant Aliens pastiche), Grabbers is simply perfect late night movie viewing – in fact I think this is the most enjoyable comedy-horror I have seen since the Nathan Fillion-starring Slither.

And if my opinion doesn’t convince you then consider the fact that the late night film festival audience gave the movie a huge round of applause – when a festival crowd does that, it’s the mark of a great film. This time last year I saw a wee horror movie called Troll Hunter at the film fest and told you it was one to watch for. Well, Grabbers is slated for general release later this summer in Ireland (hopefully UK soon thereafter) and I’m telling you that for me it’s this year’s Troll Hunter.

This was originally penned for the Forbidden Planet blog