You may recall I posted a link to my colleague Paul’s band site, The Jet City Rednecks (complete with a cool download) a few weeks ago. Well, Paul tells me they have their first proper gig very soon: “The Jet City Rednecks will be upstaging the headline act on the 27th Jan 2006 at the Half Time Orange in Leicester. Also appearing is Matt Shaw who won Stars In Their Eyes as Meatloaf … but never mind eh!” So if you’re in Leicester, drop your red cheese and get on down for some good rock’n’roll. The rest of us can enjoy the band’s artwork! 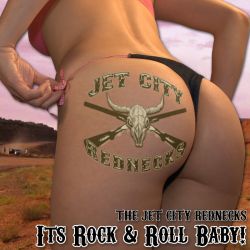 My mate and colleague Paul has a groovy website set up for his rock band here. I was listening to it while I worked today and unlike most band websites where you can listen to just a couple of sample tracks, the Jet City Rednecks have a whole gig for you to listen to. Pretty much all covers, I must admit, but they are all rock standards that anyone who has ever messed around in a band will recongnise and think, yeah we used to play that in my mate’s garage/flat/rehersal room (I remember a few from my band days myself. Jet City Rednecks, proving that there is more to Leicester than a dead King Richard and red cheese! Rock on!