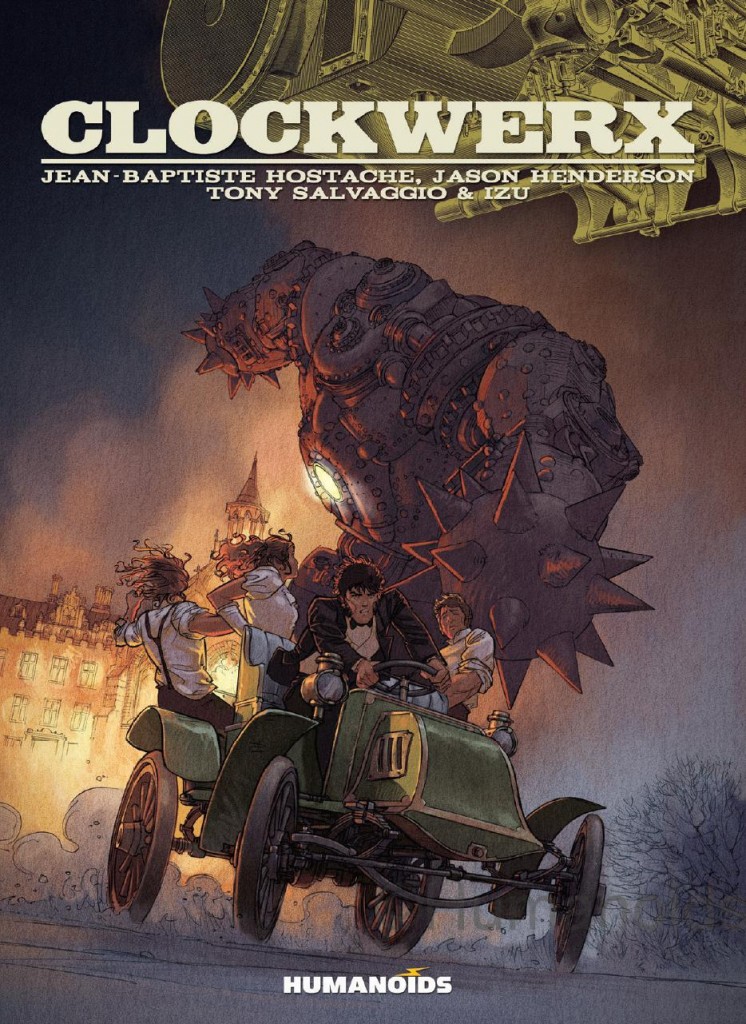 Wapping Harbour, London, 1899, when the city was still one of the greatest ports in the world and the Thames a sea of masts. But something is not right in the docks of London – as three workers make their way through night-time streets they are accosted by an enormous mechanical figure, which retreats with one of them after the intervention of a mysterious man who is stalking the nocturnal streets. Our hero turns out to be a former police detective, framed and disgraced, investigating the rash of disappearances in the area of the docks. Meanwhile a fiery young engineer, Molly Vane, and her crew struggle on a steamship caught in a dreadful storm, threatening their precious cargo of ‘Clocks’ (clockwork robotic devices operated by a pilot) and their lives. They save the ship but at the cost of some lives and Molly’s left arm, before limping into the docks at London, just as our mystery man, Matt Thurow, takes a job as a docker to continue his investigations. When he narrowly averts a disaster in the unloading of the Clocks he comes to the attention of Molly and we know it won’t be long before their paths converge. 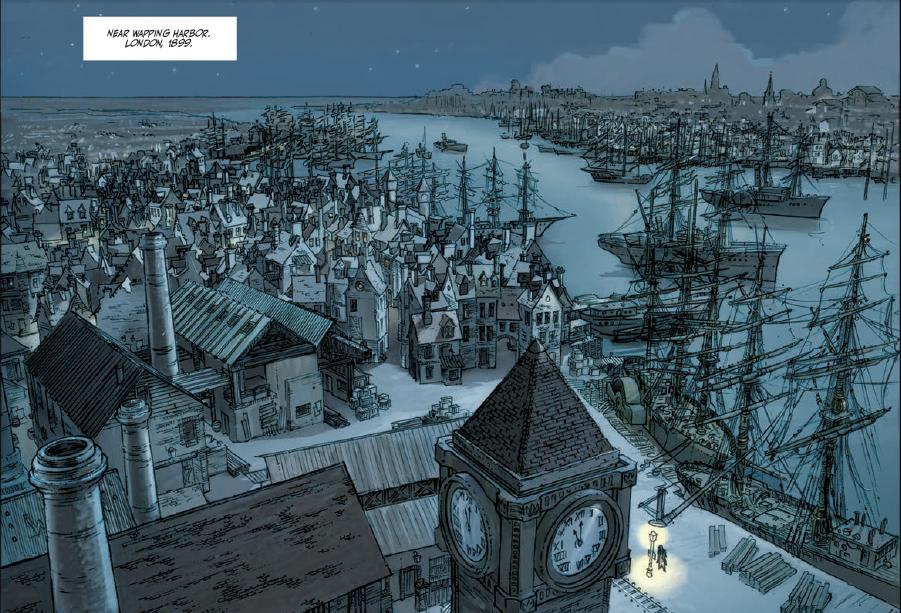 So the stage is set for a classic reluctant team-up, as Molly’s renegade machinists recruit Matt into their ranks. He’s reluctant at first, but when he discovers that Molly stole her Clocks from Lord Oak and his associates Matt is convinced to throw in his lot with them – Oak, he is sure, is behind his unfair disgrace, having set him up for a financial embarrassment that ruined his career in the Yard and which also lead to the incident that has left his sister in a coma ever since. The quick-tempered Molly has taken the Clocks she once worked on for Oak after discovering he and a shadowy international cabal plans to use them and a rare mineral, Lucifernum, found in rare meteorite deposits, as the ultimate power source, the combination of enormous mechanical devices and intense energy source giving them pretty much irresistible power over any nation on Earth.

Some elements such as the reluctantly forced together partners (complete with growing romantic interest) and the wrongfully disgraced copper out to clear his name and get revenge are pretty familiar tropes, but handled well and the characters quickly grow on you. Besides, they are there mostly to set up a cracking Steampunk science fiction adventure yarn in this alternate-history Britain, drawing on elements of classic 19th century Boy’s Own adventure tales (appropriately enough given the setting) with Steampunk elements. The story cracks along at a good pace, with plenty of peril for our intrepid heroes, who soon find that the vanished workers, Matt’s framing and the ulterior plans for the Clocks Molly created (then stole) are all related. In time-honoured tradition the odds are against them, but they’re going to try and save the day regardless. 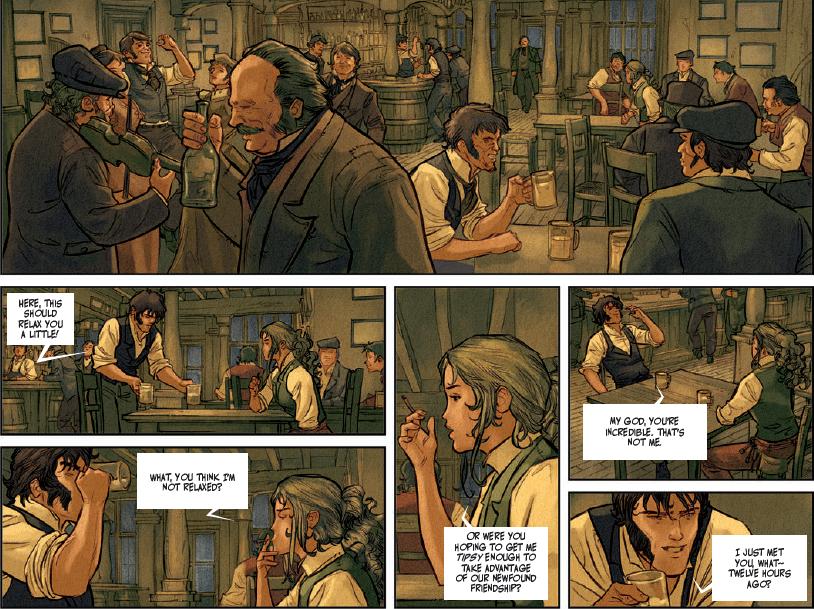 Accompanying this tale though is Hostache’s artwork, which is simply glorious in places. Hostache seems equally adept at close up, intimate moments focussing on the character’s expressions as he is at depicting major scenes. And oh boy are some of those major scenes simply gorgeous to behold, be it night over the docks of Victorian London, the Thames and rooftops shimmering in silver moonlight, or scenes with the huge Clocks, lovingly detailed pieces of imaginary Victorian tech, like Steampunk versions of the giant manned mechas so beloved of Japanese science fiction comics (and used to spectacular effect in the recent Pacific Rim film). 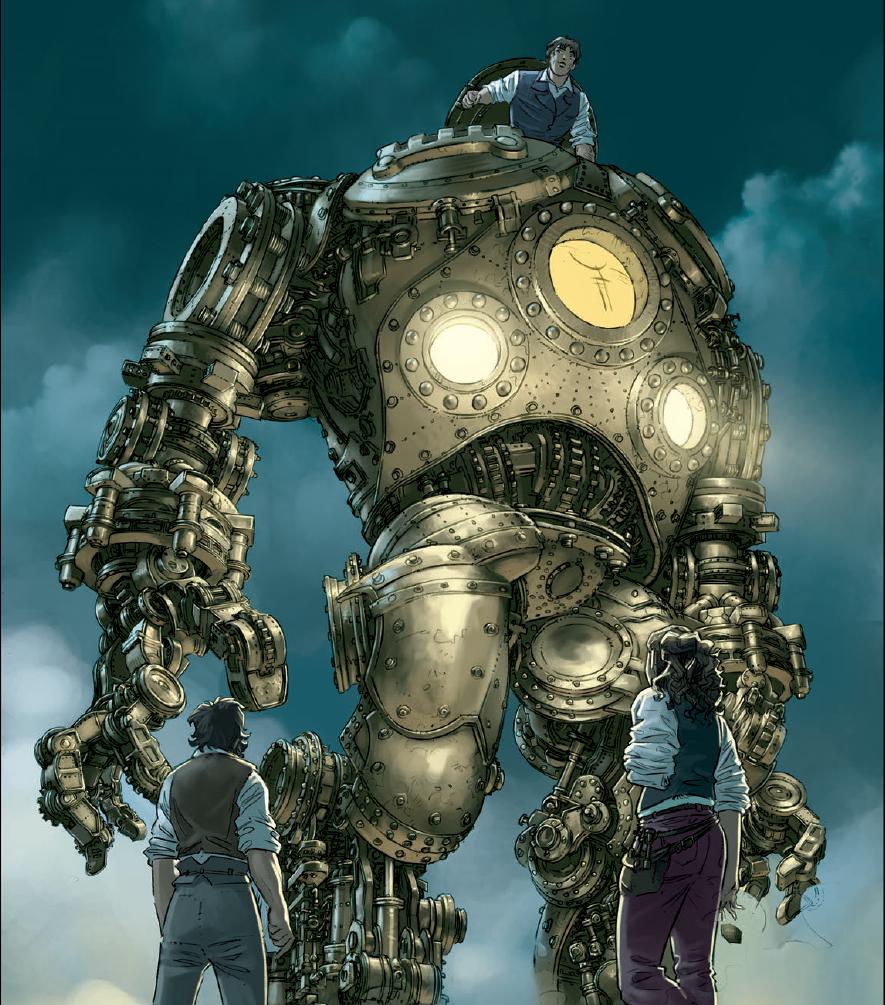 The intricate detail of the Steampunk machinery and the beautifully rendered Victorian cityscapes will delight those who loved Bryan Talbot’s lavish artwork in his Grandville series, and indeed I think Clockwerx would make a good companion to that series on your shelves. This really is beautiful art and fabulous creations that you just want to pore over and drink in, all framed around a classic adventure yarn. I’m also pleased to see a female lead character who, like Adele Blanc-Sec, is in there for her own ingenuity, bravery and resolve, not as some impossibly physiqued eye candy, and even after her accidental maiming and loss of an arm Molly remains the real driving force of events throughout, the equal of any of the men here (and their superior when it comes to her mechanical skills). A cracking, beautifully illustrated adventure in the best European comics tradition and a real pleasure to read.