Marko Ajdarc of the Brazilian comics site Neorama dos Quadrinhos sent us a good item to put up on the FPI blog and since it involves A) good European comics art and B) raising money for a good cause I thought I’d repeat it on here too. 95 press cartoonists and comics artist are contributing their work to auction to raise money for the homeless charity Droit au Logement in France. Some of the top bandes dessinées artist are involved, with names like Bilal and Jacque Tardi (who did the poster for it). 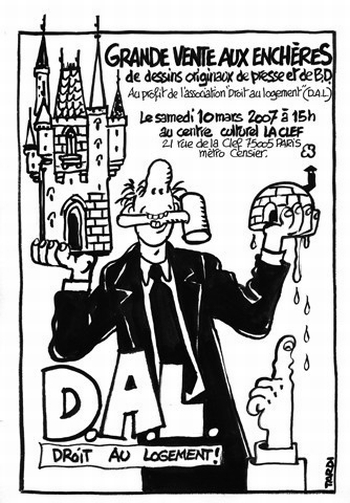 I found it interesting that this came at a similar time to the ‘red tent‘ happening in Paris, where les Enfants de Don Quichotte (how could I resist a story with a name like that?) distributed red tents to the homeless so a tent village sprang up, rapidly covered by the European media and shaming Parisian authorities into acknowledging the problem. You can look through the art on offer in the auction here.